Rose rosette disease (RRD) was first identified in the 1940s in the Rocky Mountains. Rosa species and hybrids are the only known hosts for the disease. Multiflora rose (Rosa multiflora) is a common wild host of RRD and the disease has spread throughout much of the U.S. on multiflora and other wild roses. The disease has been found in cultivated roses in Oklahoma and in many other states including Missouri, Arkansas and Texas. There is no cure for RRD and symptomatic roses should be destroyed. Despite challenges, roses are irreplaceable and should continue to be used in landscape plantings.

The symptoms of RRD are variable, depending on the cultivar of rose (Table 1). In the early stages, plants may display one or several elongated stems that may have unusual red or yellow color (Figure 1). It is important to note that many rose cultivars have normal red color on new growth, so this should not be confused with RRD (Figure 2). With time, normal new growth will develop a green leaf color, while foliage damaged by the disease will remain discolored and distorted (Figure 3). Infected shoots may be more succulent and pliable than normal rose stems. Excessive prickles (thorns) may form, which are initially soft and pliable and later may harden (Figure 4).

A common symptom of RRD is a brush-like cluster of shoots or branches that originate at or near the same point, a symptom that is called a witches’ broom or rosette (Figure 5). Leaves within the witches’ broom may be stunted, distorted, and pigmented red or yellow. Symptoms of witches’ broom, leaf discoloration, and/or distortion are often visible on one branch or more and may spread randomly across the entire plant (Figure 6). The flowers may be distorted, mottled or blighted and fail to open fully (Figure 7). Severely infected plants may not produce flowers. On some cultivars, new shoots with RRD may thicken and be more succulent than the cane from which they originate (Figure 8). Defoliation and dieback are common with RRD and susceptible rose plants may die in two to four seasons. Infected roses have reduced winter hardiness and are more likely to be damaged in cold winters. Growers often remove the plants prior to death because infected roses are no longer visually appealing (Figure 9).

Plants with RRD are under stress and are weaker than healthy plants. Stressed roses are more susceptible to other diseases such as black spot and powdery mildew. For information about other rose diseases, see Extension Fact Sheet EPP-7607 “Diseases of Roses.”

Symptoms of RRD may resemble injury from herbicides. If herbicides make contact with rose foliage in late summer or fall, the plants may show damage immediately or the chemical may be stored in the buds. In the latter case, damage becomes evident when buds swell and leaves emerge the following spring. Some herbicides can cause a witches’ broom symptom on roses, as well as yellowing or stunted, narrow leaves (Figure 10). However, excessive thorniness and unusual red pigmentation do not usually occur with herbicide injury. Most herbicides are non-selective, so other plants in the area may also show unusual symptoms of distortion and discoloration. 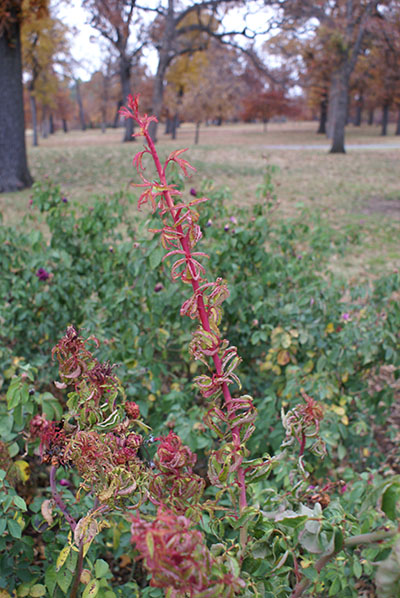 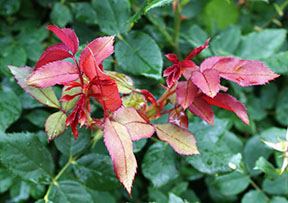 Figure 2. Normal new growth on many roses is red. This should not be confused with symptoms of RRD. 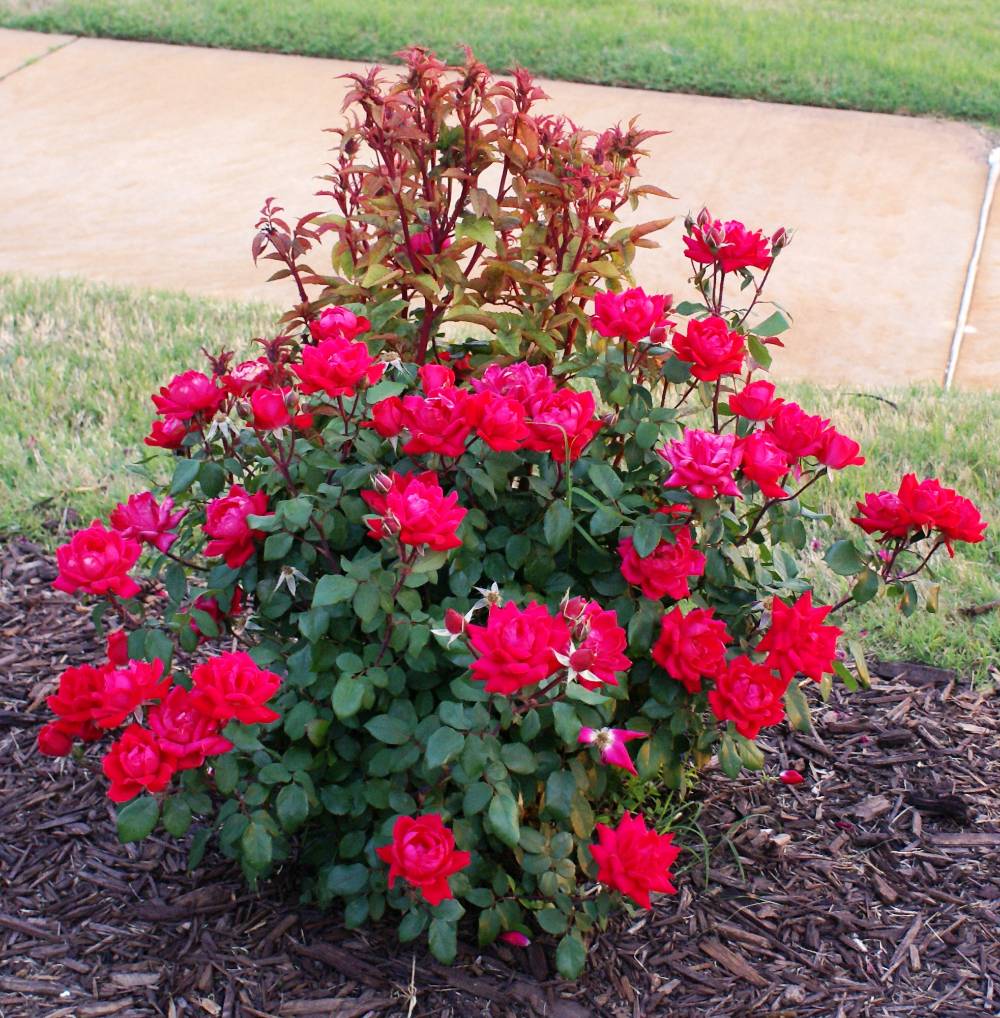 Figure 3. The healthy new growth on this rose has developed into dark green foliage with normal flowers. The section at top center is affected by RRD and continues to show leaf distortion, discoloration and may fail to flower. 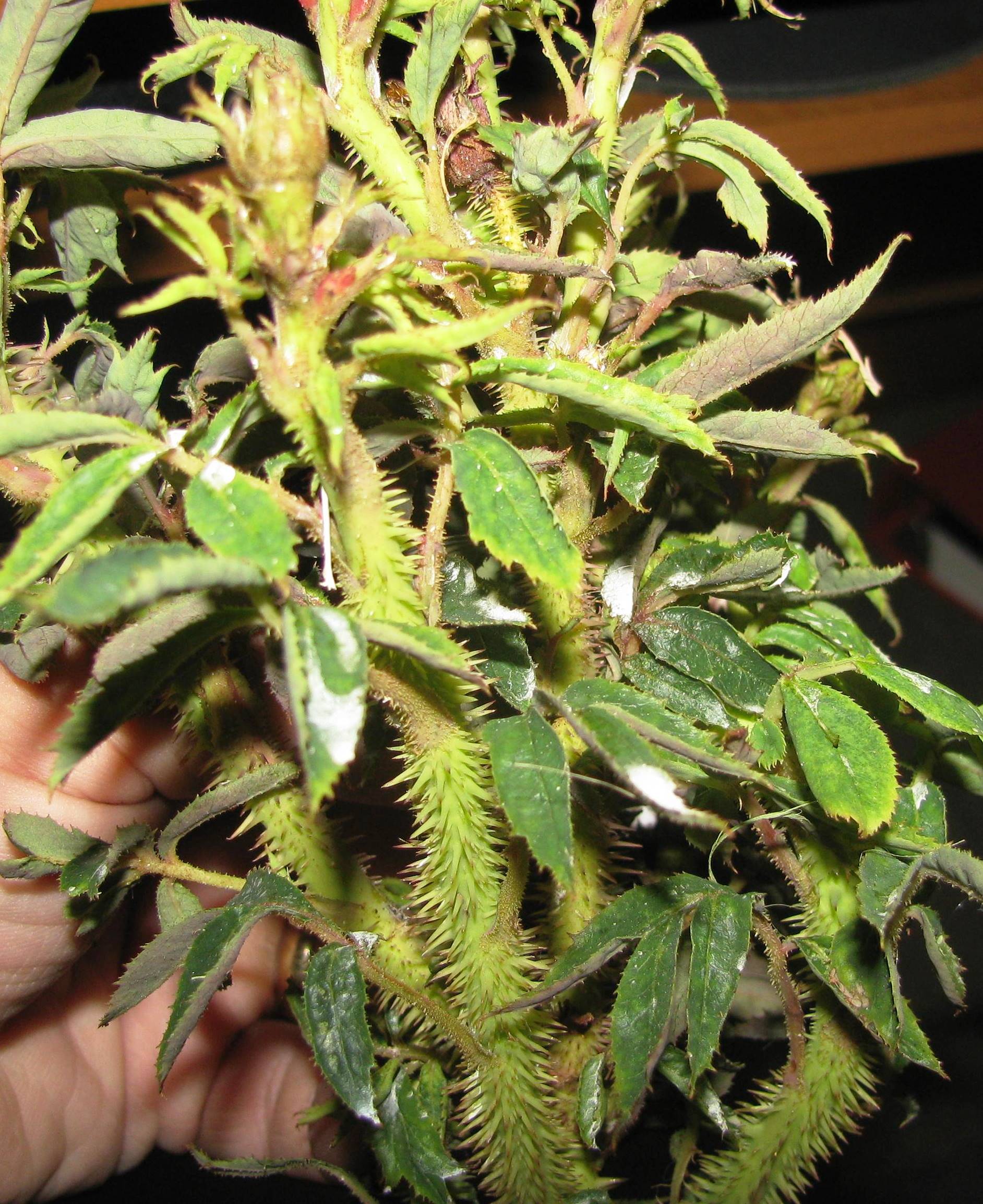 Figure 4. An excessive number of prickles (thorns) on shoots is a symptom of RRD. 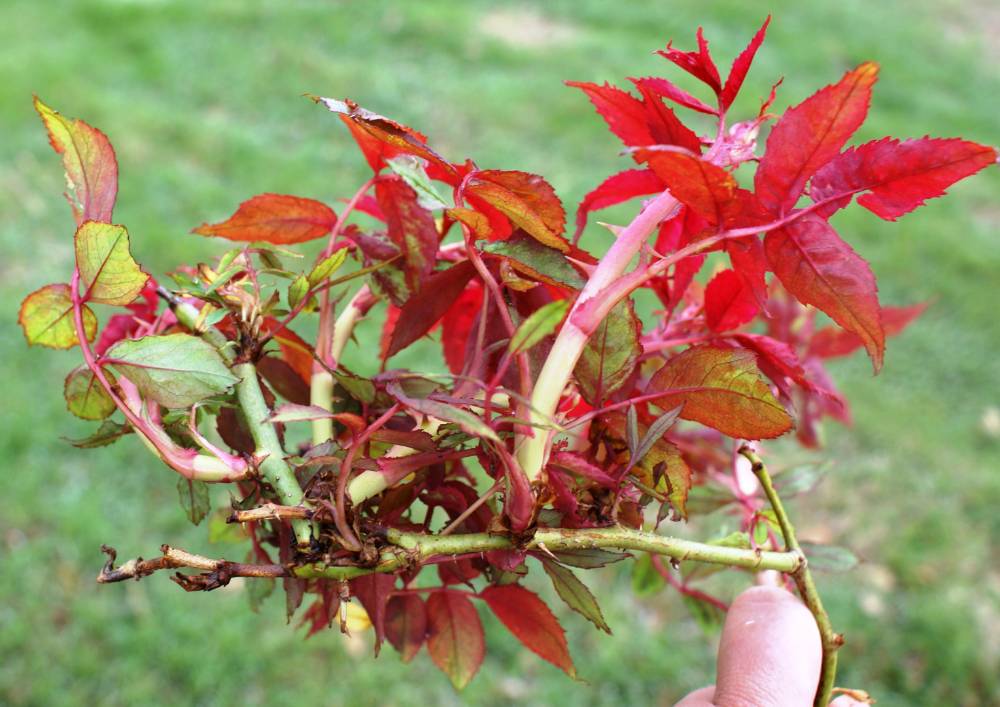 Figure 5. RRD causes rose shoots to have a cluster of shoots emerging from nearly the same point on the stem resulting in a witches’ broom (rosette) appearance. 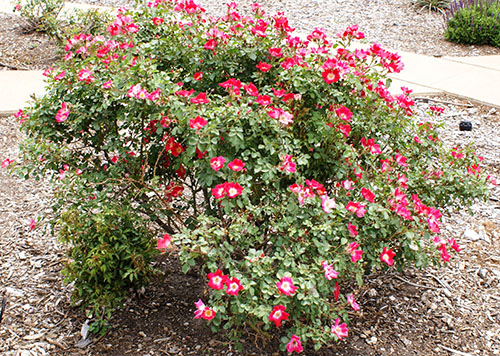 Figure 8. On a normal cane (left), the new shoot has a smaller diameter than the older growth. RRD may cause a thickening of the stem (right), so the newer growth is thicker and more succulent than older growth. 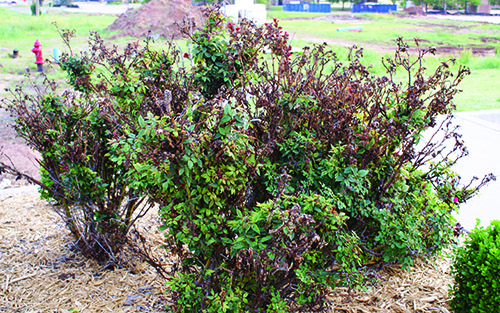 Figure 9. Diseased roses should be removed, since they harbor the virus and the mite. Often, the plants are not removed until they are visually unappealing. 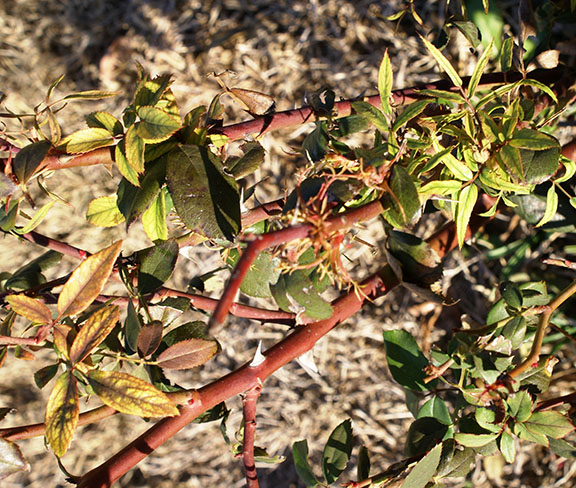 Figure 10. Leaf distortion and yellowing of a rose caused by drift from herbicide use in the landscape. 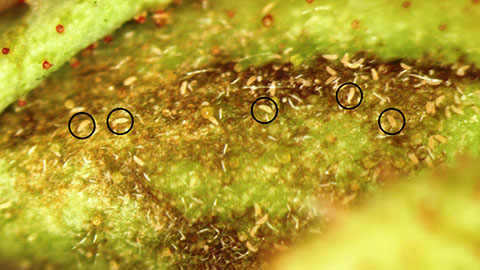 Figure 11. The eriophyid mites that transmit RRV are microscopic. Eriophyid mites are present on this magnified rose bud and a few are circled. 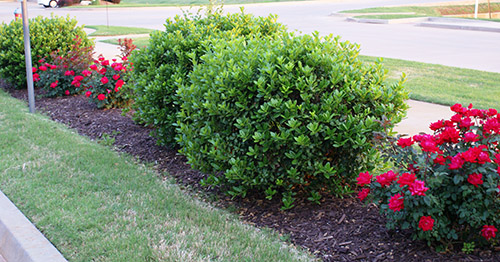 Figure 12. Mixed plantings of roses and non-host material may slow the spread of RRD in landscape plantings.

The disease is caused by a plant virus, the rose rosette virus (RRV). This virus has not been transmitted by sap; it is transmitted by grafting or feeding of eriophyid mites. Phyllocoptes fructiphilus is the primary arthropod that transmits RRV. This mite is microscopic and tends to hide in buds, on open flowers and sepals, at the base of shoots, leaf axils, or under leaf scars (Figure 11). The mite acquires RRV when it feeds on infected plants. The disease is transmitted when an infective mite vector feeds on the plant. A few weeks to months after infection, plants will begin to develop symptoms of RRD. The mites crawl short distances on rose plants, but they can be carried further distances by wind currents, blowing to new roses. Infective mites can also be carried to new sites on gloves, clothing, or tools. Both the mite and virus are specific to roses (Rosa spp.); no other hosts have been identified. The mites survive the winter by hiding near or within buds, spent flowers, leaf axils, or leaf scars. The virus may be inactive during the winter, but symptoms will appear on new growth emerging in the spring.

Management of RRD requires a multistep approach and uses integrated pest management (Table 2). All landscape roses are thought to be susceptible to RRV. Studies are in progress to determine if resistance or tolerance is present in cultivated roses. There is no cure once a plant is infected. Growers have attempted to remove symptomatic canes by pruning, however pruning is often ineffective. The microscopic mites may remain on the plant and/or recently infected canes, which may not exhibit symptoms for many months or the virus may survive in the root system. Therefore, it is recommended to remove symptomatic plants at the first evidence of the disease, including the root ball. Dead heading roses throughout the season may be useful since mites accumulate around the open blooms. Maintaining proper health and vigor of roses in the landscape may be helpful.

Miticides to control mite vectors in home gardens are not entirely effective. Monthly applications of horticultural oil may slow the spread of the disease. Commercial landscapers and nursery professionals have a wider selection of miticides that are effective in reducing eriophyid mite populations. In areas where RRD has been a problem, roses should be heavily pruned in late winter or early spring before new buds break. Do not prune too early or winter injury may occur. Debris should be removed by hand and a leaf blower should not be employed since this may blow mites onto other roses in the area. Foliage should be discarded in a sealed bag and disposed of off-site. Since the mites overwinter primarily in old blooms, many mites will be removed by heavy pruning. Following winter pruning, plants should be treated with dormant oil to reduce the population of remaining mites.

The mites will die in a few days in the absence of a host. However, they can survive on fallen debris. It is critical that all foliar material is removed and destroyed before replanting, especially fallen leaves, flower parts, and buds. The mites may also blow to other roses in the area, both cultivated and wild roses. If these roses harbor the mites or the virus, it is likely a replacement planting will become infected in the future. Therefore, wild roses such as multiflora rose should be removed, since these plants can harbor the virus and/or the mites. Other cultivated roses in the area should be scouted and removed if symptoms are present.

New research confirms that the virus is present in roots, so it is critical to remove the root ball of infected plants. Consider a one- to two-month fallow period before replanting roses since some roses can sprout from root pieces. Destroy sprouts if they develop.

When installing new roses, carefully inspect all plants, ensuring they are healthy and free of pest and disease symptoms, including those of RRD. Use proper spacing between plants and do not crowd roses. Mites are more likely to crawl from plant to plant if packed closely together. Studies show that tall barrier plants are useful in reducing new infections when the barrier plants are installed on the windward side of the garden.

It is helpful to install a mixed planting using some non-rose material to reduce disease spread. Since Rosa species and hybrids are the only known hosts, mixed plantings interfere with the disease cycle and slow the spread of disease (Figure 12).

Roses should be monitored throughout the season for symptoms of RRD. If diseased plants are replaced, a new infection may develop if other roses in the area are infected with RRV. Therefore, management is most successful when entire neighborhoods or communities are educated to recognize the disease and act quickly to remove symptomatic plants.

Stressed plants are more likely to become diseased. Promote health and vigor of roses by irrigating during periods of drought, maintain proper fertility with soil tests, and control fungal diseases or insect pests in a timely manner.

When RRD is suspected in a new area of the state, the plant(s) should be examined for the presence of eriophyid mites. The mites are too small to be seen in the landscape and examination requires a trained individual with a high-powered microscope.

Therefore, clients should cut symptomatic shoots (preferably shoots with open flower buds) that measure 6 to 12 inches long. Wrap the shoots in newspaper or dry paper towels and place them in a sealed plastic bag. If the sample is not going to be delivered immediately, it should be stored in the refrigerator. Samples can be taken to the local county Extension office and they will forward them to a specialist for examination.

Digital images are always helpful, since they may provide other clues about the problem when eriophyid mites are not detected. If the plants are symptomatic and eriophyid mites are present, the problem is most likely RRD. Due to the high cost of virus testing, the diagnostic lab will test to rule out RRV when chemical injury is suspected or if the virus appears in new areas of the state.

Suggestions for Roses in the Landscape