Reducing Mortality of Grassland Wildlife During Haying and Wheat-Harvesting Operations

Oklahoma farmers and ranchers typically harvest in excess of five million acres of winter wheat for grain and in excess of two million acres of hayland annually.  In the state, both wheat and hay harvests typically occur simultaneously with nesting and/or brooding activities.  This occurs with ground-nesting grassland birds in April through June, and with the fawning of white-tailed and mule deer in May through June.  Thus, conflicts between wildlife and farm machinery can result in abandoned nests or wounds resulting in death to incubating hens and/or broods, and injury or death to fawns.  In effect, wheat fields and hay meadows can become “sink” habitats during harvesting activities.  A sink habitat appears to offer suitable cover, food, and water to the animal, but production of young in a local population, such as that found on a small farm, is less than the mortality rate.

In Oklahoma, there are a number of birds that are ground-nesters of the tall, mid, or shortgrass prairies.   Some of these species are currently in decline, while others are typically uncommon.  At least one grasslands species, the lesser prairie chicken, has become extremely rare in Oklahoma. Two species, the northern bobwhite and the ring-necked pheasant, have considerable economic value to landowners throughout the state. All of these species can be found nesting in hay meadows.

The utilization of flushing bars mounted on tractors or self-propelled haybines can be beneficial to the survival of nesting birds and their broods. This practice has been intensely researched and applied in the 1950’s and 1960’s and is being re-evaluated in duck nesting regions of Canada and California today.  Altering harvesting routes for hay and wheat harvesting machinery will aid in the escape of incubating hens, hens with broods, or hiding fawns.

Mowing can destroy nests, eggs, adult birds, and fawns.  Ground-nesting females that are incubating eggs are extremely reluctant to leave their nests.  Nests escaping damage by haying machinery are often conspicuous and are quickly located by predators.  Warvel (1949), reported that nearly seventy-five percent of the incubating pheasants in Ohio meadows were killed or crippled in the first nesting attempt of the season during daytime hay mowing operations.  Likewise, wheat harvesting can expose hens and broods that are “bugging” in insect-rich fields to predators and to mortality caused by machinery.

The impact of mowing or combining upon grassland wildlife can be reduced if the following steps are taken: 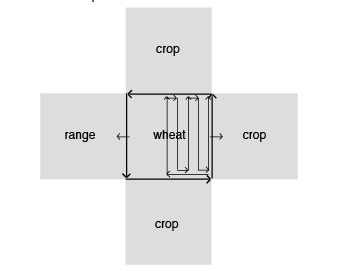 Figure 1. Illustration of “back and forth” wheat harvesting pattern versus “outside-inward” pattern.

Klonglan (1959), in a 3-year study in Iowa, attempted to determine the reasons behind the somewhat conflicting research results.  He discovered that weather and condition of the standing crop were key factors influencing success or failure of flushing bars.  In normal years and years of poor hay crops, the flushing bars demonstrated significant success in flushing pheasant hens off the nest unhurt.  However, in years when ample and timely precipitation resulted in an extremely dense hay crop, the flushing bar was unsuccessful in flushing pheasant hens.   As density and height of the hay increased, the effectiveness of the bar in flushing hens correspondingly decreased.  Apparently, pheasant “freezing” behavior hindered the effects of a flushing bar in dense cover.

Klonglan also found that flushing bars became more effective in the afternoon hours versus the hours before noon, when mowing during late May and June.  Higher percentages of hens were killed or injured from 10 a.m. to 3 p.m. than from the combined 7 a.m. to 10 a.m. and 3 p.m. to 6 p.m. periods.

There has been continued debate over whether the flushing bars become ineffective with increasing speeds of tractors and mowers.  However, Calverley and Sankowski (1995), Ducks Unlimited researchers, investigated the impact of flushing bars on mortality of nesting ducks in Alberta.  They found no difference in mortality rates between machines traveling at 2.5 mph and those traveling at 5.6 mph.  They did demonstrate, however, that the flushing bar device contributed to a statistically significant reduction in hen duck mortality.  All ducks flushed with the device escaped successfully. No research has been conducted addressing the effects of machinery speed on the effectiveness of flushing bars upon grassland birds in the southern Great Plains. 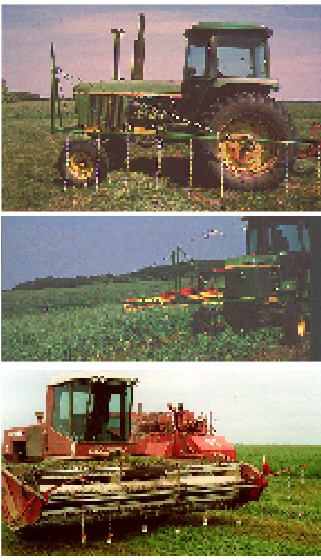 The flushing device is a simple triangular frame of square steel tubing (see figure 3).  The frame is 12 feet in length. A 4 ft. long, removable end section is adjustable to suit different mower widths. Three, foot-long galvanized chains at 20 in. intervals (others have used 6.5 in. – 10 inch intervals) are hung vertically to penetrate vegetation.  The lower 6 in. of each chain has a spliced double chain to add weight for better penetration and noise production (others have used 4 lb. cast-iron sash weights suspended from cables).   The device is held in position perpendicular to the line of tractor travel by a stabilizer bar.  The stabilizer bar is made of slightly lighter material and designed to rotate without damaging the tractor or device, should any obstruction be encountered. The flushing device is custom-mounted to the front of the tractor or to the front-end loader arms and is suspended 1 m above the ground.  Each flushing device cost approximately $200 to fabricate.  A major additional cost is the custom designing and welding of the mounting mechanism onto the tractors or self-propelled haybines.  The total cost of a fully mounted flushing device is estimated at approximately $700.

Some have suggested that alarm calls mimicking sounds of the species in concern could be broadcast from a harvesting machine periodically to flush nesting hens.  Others have suggested broadcasting hawk sounds to sensitize the birds so that they flush more easily.  Stewart and Dustman (1955) found that incubating pheasant hens placed their heads beneath their breasts as if searching for a chick when the distress peeping of a chick was presented. A distress squeal of a hen pheasant and the squeal of a weasel caused only slight movements of the head of the hen.  Freezing behavior sometimes occurred when the birds were exposed to a sound of about 60 decibels above the average background noise.  No studies have demonstrated that any auditory signal has value for frightening Ring-Necked pheasants or other ground-nesters from their nests ahead of the mowing machine.

Ducks and pheasants have been observed to flush very close to the cutter head of either a combine or haybine.  Installation of a sorghum guard, which has longer tines, might reduce mortality of all grassland bird species by either flushing birds sooner or helping them stay under the cutter (Kuhn et al. 1996).  Many grassland birds nest in small depressions in the field, and they might be enabled to escape the cutter bar if the bar is raised three inches or more above the ground.  While harvest volume will be reduced as a result of raising the bar, the cutter will dig into the dirt, such as gopher mounds, less frequently, thus reducing maintenance costs.  Quality of the hay will be higher because less stem will be harvested.   In addition to these practices, angling the cutter bar slightly upward instead of horizontal or downward might push the heads of the birds away from the cutter.

The following are methods to reduce grassland wildlife mortality:

Learn about the design principles and guidelines needed to build birdhouses for eastern bluebirds.