Hydroponics is the cultivation of plants in water using inert material like rockwool or perlite rather than soil. Hydroponic production is often found in greenhouses due to the controlled conditions of temperature, light and humidity, which allow for increased plant growth. Hydroponics in a greenhouse allows for year-round production, allowing growers to benefit from high market value for off-season production.

The crop to be selected for greenhouse hydroponics production should have a high market value, year-round consumer demand and should not have a spreading growth habit. Among vegetables, tomatoes, peppers, cucumbers, leafy greens and herbs are great choices for hydroponic production. Fruits like strawberries, blueberries and raspberries are becoming more common.

Pruning is a practice of purposeful removal of plant parts like branches, buds or roots without affecting the yield of a plant by maintaining the balance between vegetative and reproductive growth. The purpose of pruning may vary according to different types of plants. Improper pruning may harm plant health, stability, appearance and lead to a reduction in plant yield, so proper pruning is essential. Some of the reasons for pruning greenhouse hydroponic crops are to:

Pruning is important for plants growing in every environment, but is very crucial in hydroponics. Growth rates are generally higher in hydroponics. Without regular pruning, excessive growth, which is very hard to manage, can occur. The root systems of hydroponic plants are not as strong as plants growing in soil because roots do not have to spread out in search of nutrients. Plants in hydroponics are not able to support heavy loads due to poor anchorage of the roots. Pruning is also important for greenhouse production because, due to higher cost per square foot, growers need to use the area very efficiently. Therefore, pruning allows high density planting and greater quality products.

Tomato is a common hydroponics crop. Pruning is crucial for tomato production, as it ensures proper utilization of energy in growth of fruits and the main stem. Pruning is required for indeterminate types, plants which continue growing and flowering, as 50 percent of tomato yield is reduced without pruning and trellising. Indeterminate types of tomatoes, also called vining tomatoes, can grow up to a height of 10 to 12 feet, while 6 feet is a normal height. The best way to prune tomatoes is to maintain one main stem, and remove all suckers (side shoots). Hand removal of suckers 2 to 2.5 mm in length once a week is the best method of pruning tomatoes (Figure 1). At this size, suckers can be easily broken by hand without injuring the main stem. 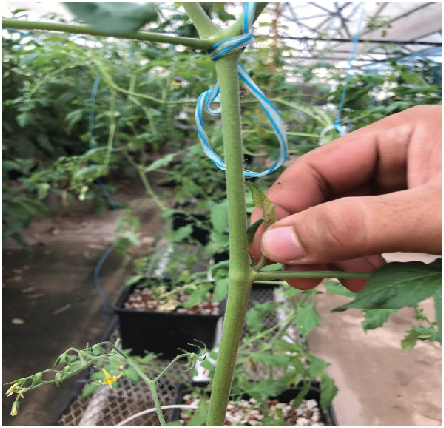 Also important in pruning tomatoes is removal of lower leaves. These are the older leaves which turn yellow and are susceptible to diseases, so removal of these leaves every other week is necessary. The best way to remove these leaves is to bend them upward first and then pull down as to prevent peeling of the skin on the stem. Do not use scissors to remove leaves. Pruning will make harvesting easier and increase air circulation within a plant, thus lowering disease development. These removed leaves should be removed from the greenhouse.

Pruning of sweet peppers in hydroponics will reduce production cost, increase yield and reduce disease susceptibility. Sweet pepper pruning is different from tomato pruning because peppers do not produce side shoots like tomatoes. After pinching (removal of the plant tip), the top two nodes start to grow. The main objective of sweet pepper pruning is to develop a strong vegetative frame for supporting fruit growth and weight during production. It is different from field-grown peppers because that all flowers are allowed to develop in field-grown peppers, while some flower nodes are pruned in hydroponic peppers. This is because hydroponic peppers are allowed to produce for a period of eight months, while field-grown peppers generally produce for two to three months. Here are the steps for sweet pepper pruning: 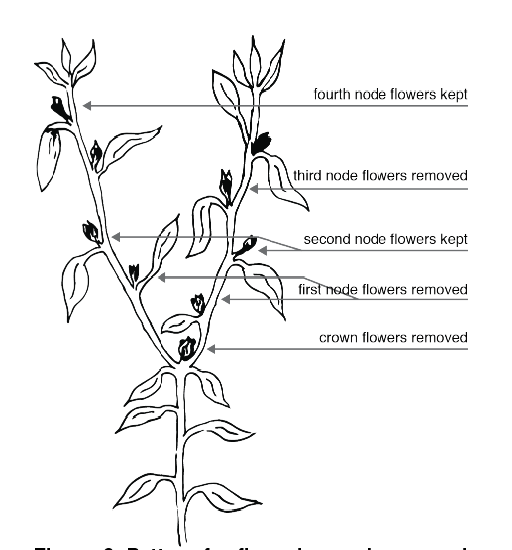 Cucumber pruning is different than tomato pruning because cucumber yield is directly proportional to leaf area. So, removal of more than one leaf at a time is not recommended in cucumber. There are various pruning systems utilized for greenhouse cucumber production: high pruning system, low- middle pruning system and umbrella renewal system. In all of these systems, the main stem is trained with a vertical piece of wire to a main support cable which is generally 9 to 10 feet high. 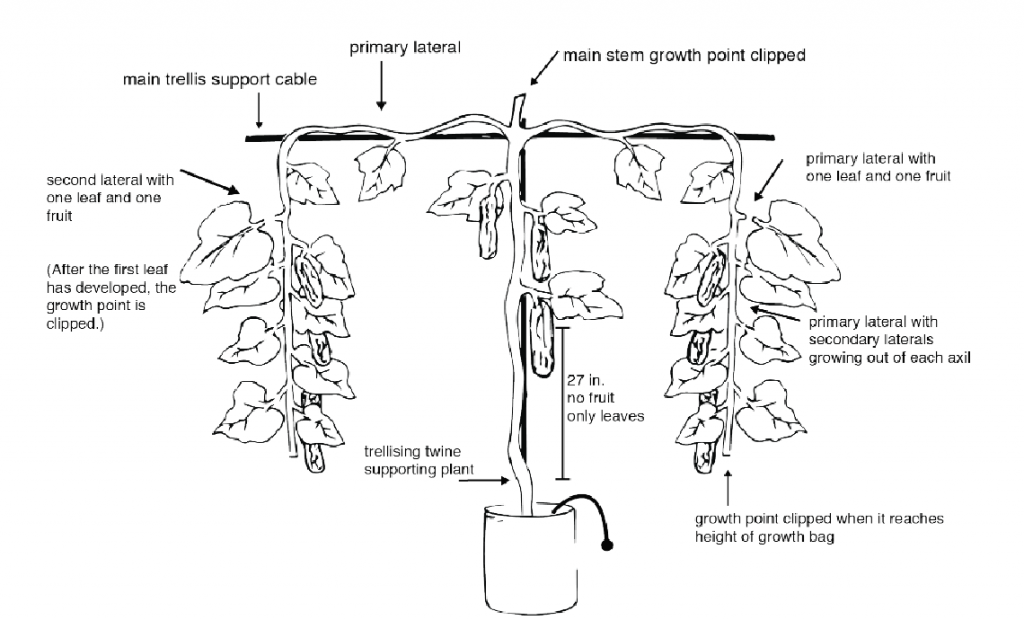 Strawberry pruning consists of leaf pruning, runner removal, flower pruning and crown pruning. Leaf pruning consists of removal of old leaves that start turning yellow and are no longer able to photosynthesize. These leaves also prevent air circulation and light interception into the canopy, thereby enhancing the chance of disease development. Growth of runners is common in strawberry, which is one method of reproduction. Growth of runners during the production period is unnecessary and a waste of carbohydrates, which can be used for flower production. Therefore, runner pruning is also important for good quality fruit production in strawberry.

Flower pruning in strawberry is done to promote vegetative growth or to promote production of large fruits. When plants are started from runners, plants need to establish a large crown. For crown development, the flowers developed during early growth are removed, so that sugars produced by photosynthesis (photoassimilates) are allocated to vegetative growth (Figure 5). The size of fruit is inversely proportional to the number of flowers. If there are a large number of small flowers produced, small fruit production is likely, so flower pruning is necessary for good quality fruit production. 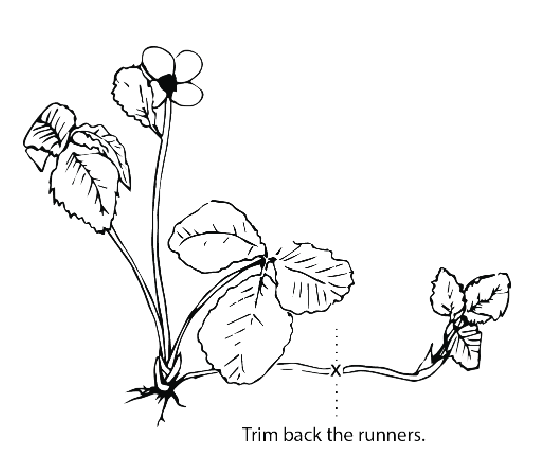 Blackberry pruning can be a bit hazardous compared to strawberry pruning because some cultivars have thorns. However, most modern blackberry cultivars are virtually thornless making these varieties is a lot easier to prune. It is recommended to wear gloves and use clean and sharp tools for blackberry pruning. Blackberries are not very fast growers, but regular pruning will allow for higher yields. Blackberries not maintained are more prone to diseases.

There are two types of blackberry pruning: tip pruning and clean-up pruning. Tip pruning is performed in early spring, while clean-up pruning is performed in late summer. In tip pruning, cutting off the tips of blackberry canes will force branching, creating more wood on which blackberry fruit will grow on. Cut canes back to a length of 24 inches and for canes shorter than 24 inches just prune the top inch. Cutting back tips will also lead to firmer canes that will be better able to support weight of fruits and leaves. During tip pruning, any diseased or dead canes should also be pruned. Clean-up pruning is necessary for regular fruit production in blackberry. Because blackberry canes older than two years will not produce fruit, it is necessary to remove canes which have already produced fruits once. This will encourage production of more first-year canes, which will lead to more fruit-producing canes the next year.