Budding is inserting a single bud from a desirable plant into an opening in the bark of a compatible rootstock to create an advantageous variety (cultivar) and rootstock combination. In fruit trees, T-budding or Chip budding are grafting techniques that use a single bud from the desired scion rather than scionwood with multiple buds. Budding can be used on many kinds of plants: apples, pears, peaches, and a large number of ornamentals.

Fruit tree rootstocks are usually budded during the seedling stage of growth when they are at least as large in diameter as a pencil. If this size is attained in June, they may be budded using cold stored scionwood and then forced into growth in a short time. When the seedling development is delayed, budding can be performed in August and early September using scionwood cut from current season growth and the buds are not forced into growth until the next spring.

In late summer, scionwood is secured from desirable varieties at the time budding is done. In the morning when temperatures are cooler, collect strong, vigorous, current season shoots. Select shoots with plump, healthy buds from areas receiving good sunlight. Very large water sprouts are not suitable for scionwood. Immediately remove the leaves from the bud stick with a sharp knife or hand shears but leave the petiole (leaf stem) intact. This stub can serve to protect the bud and also serve as a handle while the bud is being cut from the stick and inserted into the seedling. The cut surface of the bud or rootstock should not be touched since your fingers will transfer oils and salts that are harmful to the meristematic cells.  Immature buds near the terminal should be removed. Ordinarily a bud stick will have 3 to 6 buds.

Store the scionwood in a labeled plastic bag to prevent drying. Store in a cool area around 32-40 degrees until needed. Scionwood should not be stored for more than a couple of days for late summer budding. June buds can be collected and stored much like pecan graftwood as described in the Collecting & Storing Pecan Propagation Wood Fact Sheet HLA-6217. When taking the scionwood to the field, caution should be used to keep buds from drying out. Keep buds in a cooler with ice to keep cool and moist.

The “T” bud and the Chip bud are the two common methods to propagate fruit trees and many ornamentals. The T bud is one of the easiest manners of propagating. When using the T bud method, the rootstock must be vigorously growing, sometimes referred to as the “bark is slipping”. This means the bark is easily peeled from the wood without tearing. Chip budding can be performed when the bark is tight so it can be used earlier and later in the season. With practice, the chip bud can be faster and quicker to heal. The basics in handling scionwood and rootstock are the same but the cuts are quite different with each method.

Specialty budding knives and suitable budding tapes can be obtained from horticultural or nursery suppliers accessible on the Internet or at some retail nurseries. 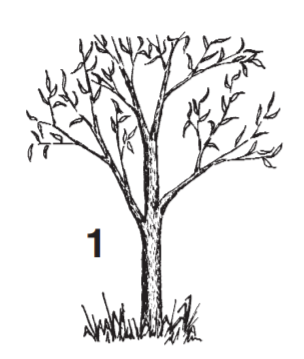 1. Preparing Stock - A young seedling as large or larger in diameter as a pencil is preferable. Remove all the growth on the lower 6-10 inches of the tree. 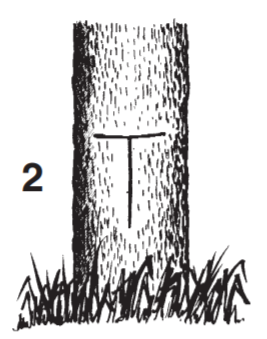 2. Making First Cut – The first cut is made lengthwise of the stem near the ground line, preferably on the north side of the stock. Next, make the cross cut by a rolling movement of the knife, which lifts the corners of the bark where the two cuts cross each other. 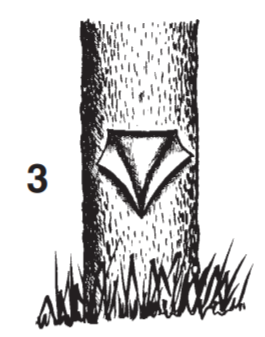 3. Open the Flaps – The same area with the flaps opened out to receive the bud. 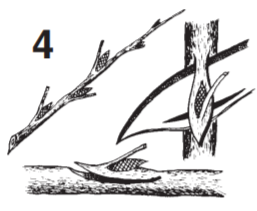 4. Cutting the Bud – Remove the bud from the stick by making the cut upward just underneath the bud. This cut should be from ¾ to 1 inch in length, extending below
and above the bud. 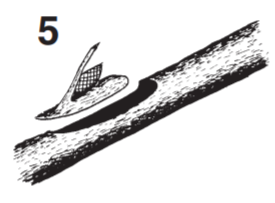 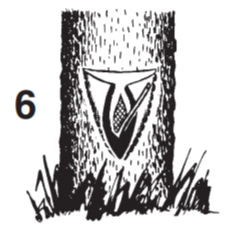 6. Insert Under Bark – Insert the bud in the flaps under the bark and push it down until
it is firmly in place. If a part of the tissue extends above the top of the “T” cut, it should be removed. 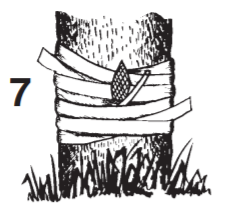 7. Wrapping the Bud – Secure the bud to the stock by wrapping with 1/8 inch rubber
budding strips or poly budding tape. Make at least two wraps below the bud and two above. The band maintains constant pressure, but expands with the growth of the tree. 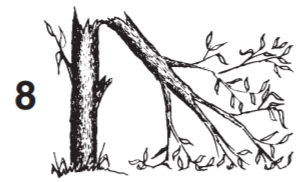 8. Forcing June Buds – when June budding, to force the bud, break the top over about one-half the distance from the ground to the top of the seedling, leaving it attached to shade the row of seedlings trees. When budding is performed during late August or early September, the buds should callus well during the remainder of the growing season and be forced into growth the following spring by removing the top if the new bud appears alive. 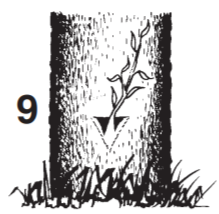 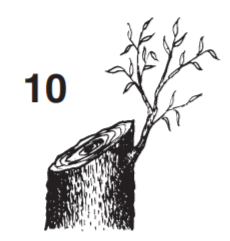 10. REMOVE THE TOP - When the forced bud starts to grow, remove the top of the seedling just above the new shoot. 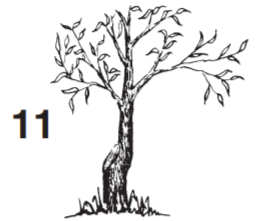 11. REMOVE NEW GROWTH - Keep the new growth removed from the base of the
seedling below the bud. Some of the shoots on the new top growth may be removed near the base to force more length of growth into the new tree. In June budding, the old
top should be removed as soon as the bud starts to grow. Keep the surplus growth removed in order to produce a larger tree during the growing season. 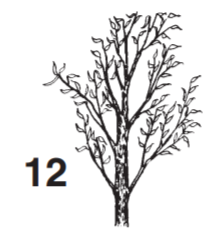 12. THE TREE IS READY - The converted tree, the new variety, after a season’s growth. The tree is ready for transplanting to its permanent location. 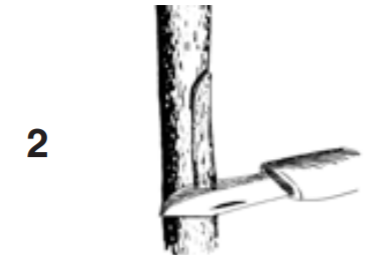 2. Making initial cut on rootstock – Choose a smooth area on the bark. Cut the stock at a 45 to 60 degree downward angle about 1/8 inch deep. 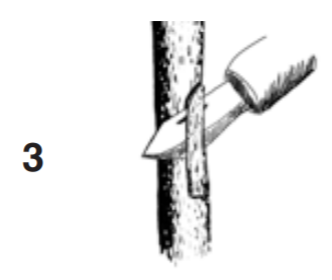 3. Second cut - Then move the knife about ¾ inch higher and cut down to meet the first cut. (Spacing is determined by species and size of buds). 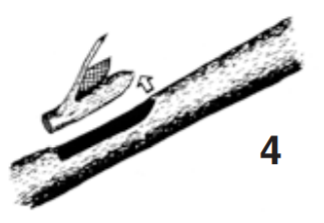 4. Prepare the bud – Remove the bud chip from the scionwood employing the same technique used for the rootstock. The size of the bud chip removed should match
the area prepared on the rootstock. Keep the bud clean. Do not touch the cut surface. The petiole will assist with holding the bud. 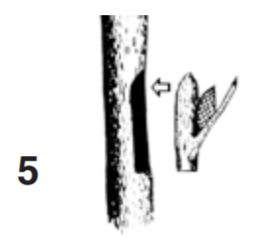 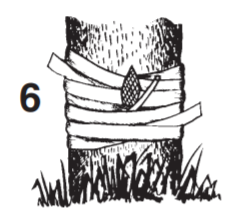 6. Wrapping the bud - Use poly tape to seal the chip bud, only leaving the bud exposed.
Proper wrapping is essential to prevent the bud from drying out.