Producers in Oklahoma and surrounding states grow winter wheat in a continuous system, where the field is planted in the fall and harvested in late spring. Then the field is left summer fallow, when it is prone to soil erosion. A study conducted in the southern Great Plains, which includes Oklahoma, demonstrated soil losses from summer fallow fields increased 18 times when compared to fields cover cropped in summer (Sharpley & Halvorson, 1994). This huge soil loss decreased soil nitrogen by four times and phosphorus content by three times. Those nutrient losses might have contributed to wheat yield reduction in the region (Patrignani et al., 2014). These production losses are the sales pitch of conservationists, who typically follow with the arguments that cover crops also sup-press weeds and “improve soil health” with time. The latter is a generalized term used to synthesize increased soil water infiltration, holding capacity and nutrient retention. Although all those arguments are supported by several scientific works, most of them were performed in the southeastern U.S., where summer rainfall is higher and better distributed than in Oklahoma, making summer cover crops a success.

Nevertheless, dry summers are a frequent concern for Oklahoma producers who rely on any fast-cash summer crop or hay forage. Moreover, investing in summer cover crops becomes even more concerning because no financial gain is expected in the near future. It is all about preserving and improving soils for future profit. That’s why farmers will opt for low input summer cover crops and skip fertilization and herbicide application. Furthermore, producers may choose to graze cover crops to recuperate some seed and establishment costs. The option of grazing cover crops becomes even more attractive and, in some cases, a necessity when a summer drought period drastically reduces forage production of perennial pastures.

The objective of this Fact Sheet is to discuss the potential of grazing summer cover crops and their effects on the fol-lowing winter wheat crop. All discussion is based on findings obtained from soil and weather conditions in Oklahoma and is focused on finding a middle ground between profitability and conservation. All findings and discussion mentioned in this Fact Sheet is a summary of Horn et al. (2020), which is an open-access article published in the Agronomy Journal.

The top three legumes and grasses asked about by Oklahoma producers in recent years were evaluated, along with two selected mixtures. A complete listing of cover crops, seeding rates and cultivars selected are provided in Table 1. The effect of these cover crops on the next winter wheat crop was compared to summer fallow fields (i.e., weeds controlled by regularly disking the soil at 4 inches every 15 days). Two tests were established in disked and cultipacked fields near Chickasha and Perkins in mid-June 2016 and 2017. No fertilizers or herbicides were applied at any time during the summer. The initial soil fertility and texture for both locations are presented in Table 2. All summer cover crops fields were split into three subfields in late July (six weeks after planting) and different simulated grazing managements were applied in each third of the fields. The simulated grazing management strategies were:

Cover crops were allowed to continuously grow until mid-September (14 weeks after planting), when they were chemically terminated by spraying 48 fluid ounces glyphosate per acre. The desiccated cover crops were kept standing for four weeks. Plots were fertilized with nitrogen (as urea) at 60 pounds of per acre and Gallagher hard red winter wheat was no-till planted into the standing cover crops at a seeding rate of 70 pounds per acre in mid-October at all locations. An additional 60 pounds per acre of nitrogen (as urea) was applied before wheat reached the Feekes 6 growth stage (jointing). At maturity in early June, wheat grain was harvested. No chemical weed control was performed during the winter wheat growing season to allow evaluation of the effect of cover crop soil cover on controlling weeds.

Table 2. Soil fertility and texture at six inches depth in Perkins and Chickasha before cover crops establishment in 2016.

All cover crops produced acceptable amounts of forage in late July 2016. As expected, legumes produced less forage than grasses (Figures 2 and 3). Severe-simulated grazing resulted in higher forage availability than recommended. However, these higher forage availability in severe-simulated grazed covers varied from negligible (1%) to significant (33%) when compared to recommended-simulated grazed cover crops. The study indicates grazing to the soil surface provides a 33% increase in forage consumption at best. However, additional data in the coming years are needed to determine if this can be expected every year.

In 2016, the total forage production (cover crop + weeds) of legumes was greater in Perkins than Chickasha (Figures 2 and 3). However, the greater legume forage yields found in Perkins werean artifact of a high incidence of weeds (29% to 51%) that inflated total forage yields. In fact, the actual legume forage yield was similar in both locations. These similarities in yields became apparent when the weed biomass was deducted from the total yields.

Good quality, weed-free forage mixtures were produced in Chickasha, 2016. However, the mixtures were 98% dominated by grasses and produced less forage than solely planted grasses. Thus, the evaluated mixtures were merely low-producing versions of the grasses. Similar mixture results were found at Perkins that year. Total forage production in mixtures was lesser than in grass cover crops and legume incidence in mixtures was low (5% to 13%). The only difference from Chickasha’s findings was that weed incidence in Perkins was much higher (18% to 33%). 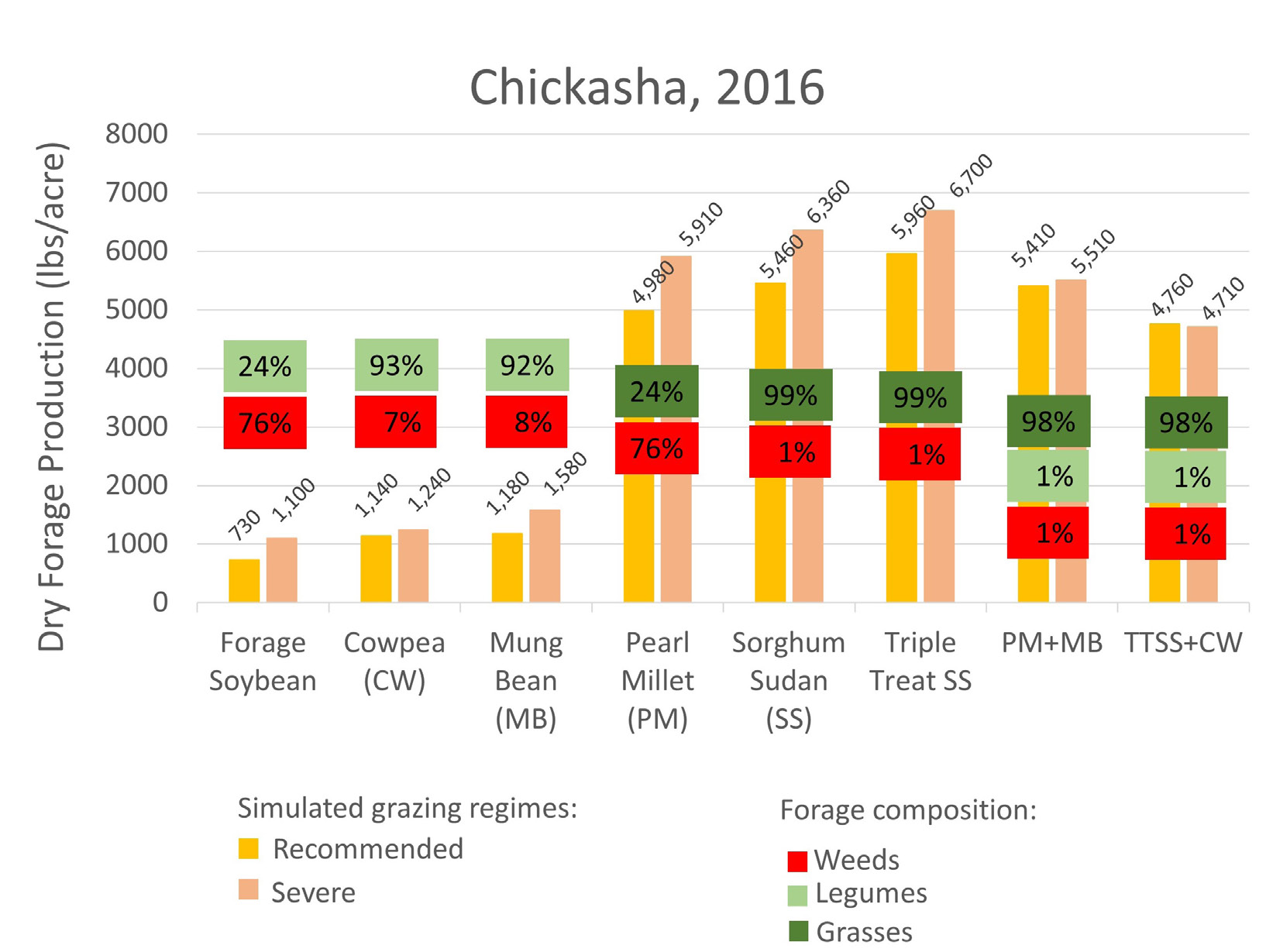 Figure 2. Forage production of tested cover crops in late-July of 2016 in Chickasha. 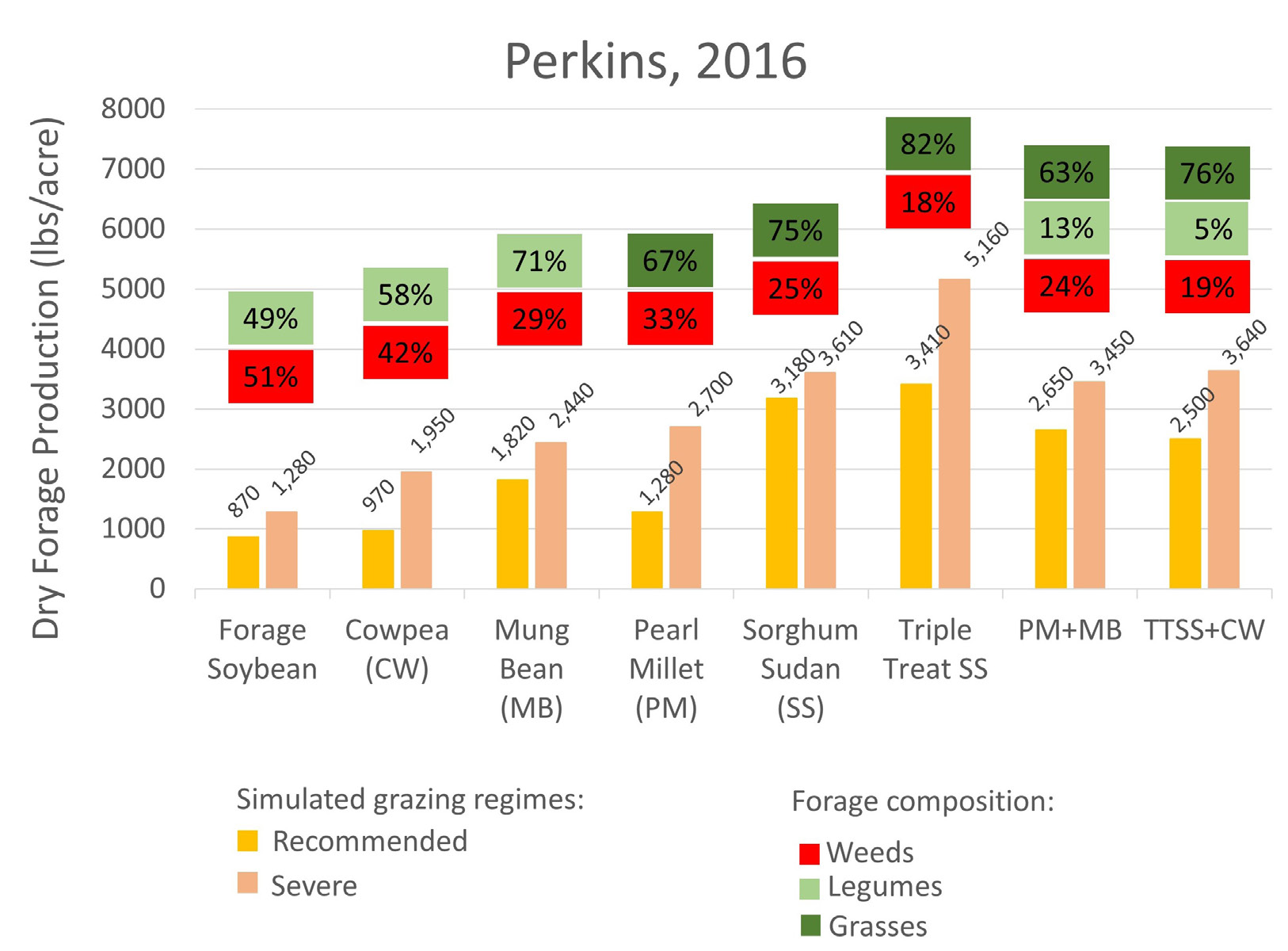 Figure 3. Forage production of tested cover crops in late July of 2016 in Chickasha.

Volunteer crabgrass was the overwhelming weed observed in Perkins, 2016 (Figure 4). Although crabgrass was labeled as a weed, it is considered a good summer forage and provides good soil cover. Therefore, the crabgrass-infested cover crops in Perkins was suitable for grazing and cover production. To learn more about crabgrass as forage, see PSS-2790, Managing Crabgrass in a Continuous Graze out Wheat System and  CR-2606, Oklahoma Crabgrass Variety Performance Test. Although the weed pressure in Chickasha was much lower, pigweeds and stinkgrass were the dominant weeds (Figure 3B), both of which are undesirable as forage and soil cover.

As previously discussed, Perkins had higher weed incidence and lesser cover crop yields than Chickasha in 2016. The difference between locations is likely due to their contrasting soils. The soil type in the Chickasha fields is a clay loam soil with good initial fertility. On the other hand, the soil type in Perkins is a sandy loam soil with low initial fertility (Table 2). Perkins fields were not fertilized and resulted in poor cover crop performance in (Figure 5). Cover crops with improved genetic potential in producing forage and competing against weeds demand an adequate amount of nutrients to express their desirable traits. Their genetics alone will not do the trick. Fields in Perkins failed to provide a proper amount of nutrients to cover crops, making them low yielding and susceptible to weeds.

In mid-June 2017, no rainfall was observed for more than two weeks after replanting cover crops at the Perkins site. This prolonged dry period resulted in cover crop failure. In Chickasha, a few showers totaling 1.5 inches of rainfall a week after replanting allowed cover crop emergence in 2017, but no precipitation was observed for 29 days after emergence. Thus, the amount of forage was so limited that a high proliferation of weeds (25% to 89%) was observed (Figure 6); and only the severe-simulated grazing was possible due to small forage production at the end of July.

This second-year planting attempt demonstrated how erratic rainfall patterns are in Oklahoma. In 2016, precipitation was well-distributed throughout the whole summer, allowing the right growing conditions for cover crops most of the time. Conversely, extended drought conditions during June and July followed by short-duration, high-intensity rainfall during early August made the 2017 season challenging for cover crop production. The best approach for overcoming these unpredictable rainfall patterns could be the implementation of flexible planting dates. For instance, delaying the cover crop planting after an drought-ending rain could be a successful approach for the 2017 season. 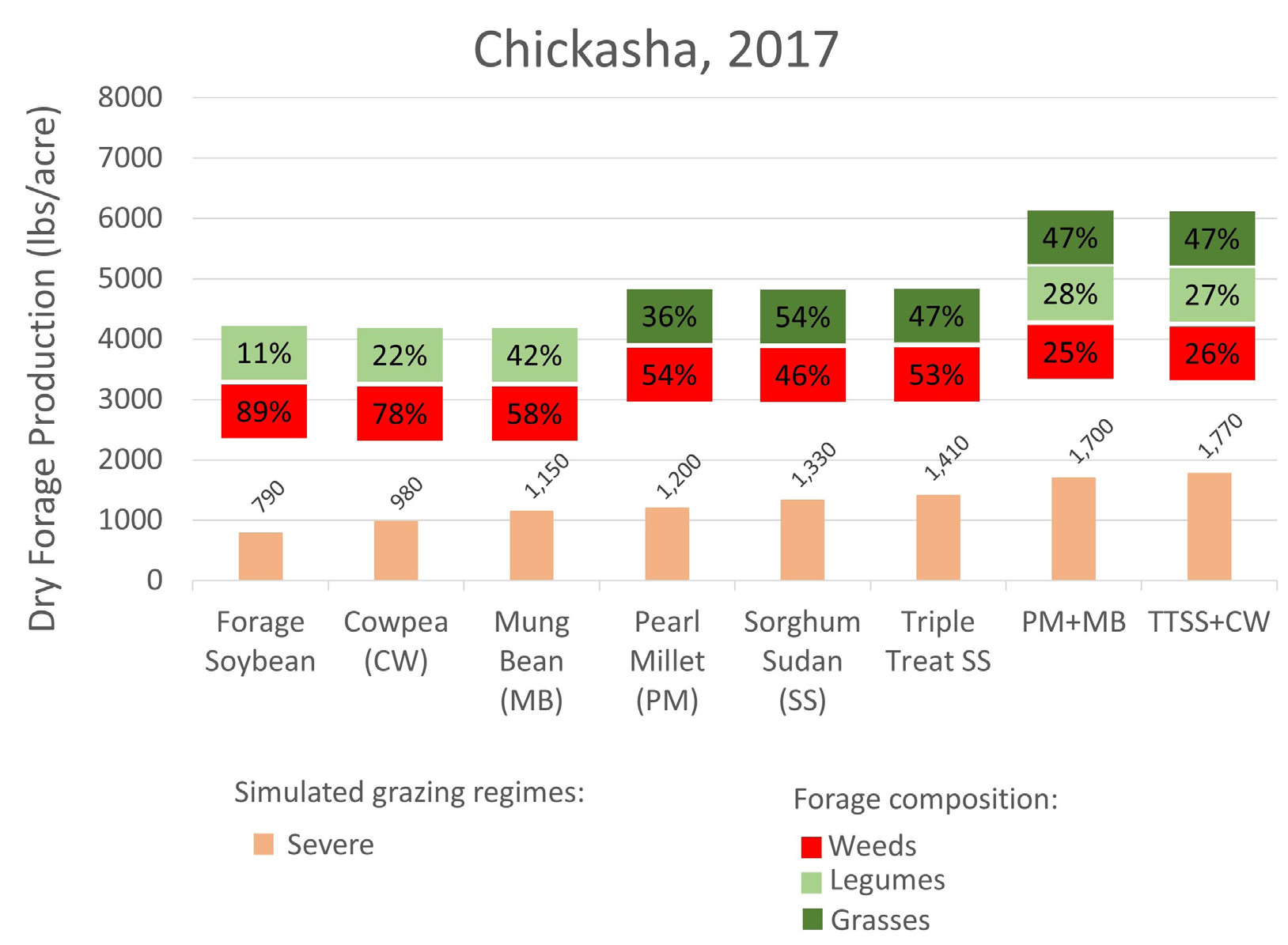 This incredible amount of cover crop regrowth was possible in 2016 because rainfall was abundant and well distributed after late July grazing. Nevertheless, it is fair to assume grazed cover crops could produce less soil cover than ungrazed if a prolonged drought period started in late July. Also, the recommended-grazed cover crops could have shown a slight regrowth advantage over severely grazed cover crops if rainfall was limited after grazing in 2016. Therefore, good management practices indicates to stop grazing at the 3-inch stubble height for legumes and the 6-inch stubble height for grasses. 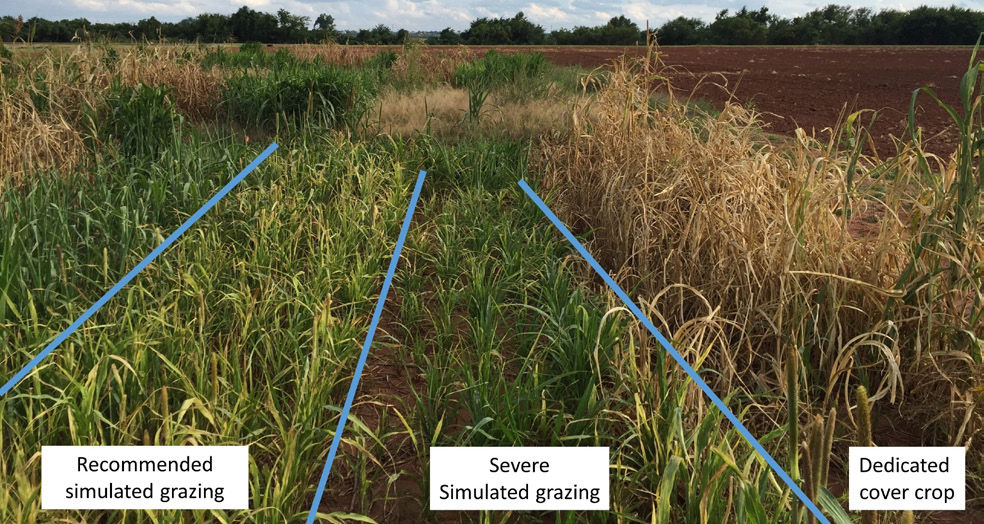 In 2017, the total soil cover production of all cover crops was considered small in Chickasha (1,000 to 1,900 pounds per acre). Also, weed incidence was high in all cover crops at 40% in sorghums and mixtures; 60% in pearl millet, cowpea and mung beans; and 90% in forage soybean. This small and weed-infested soil cover production in 2017 was attributed to prolonged dry periods during summer.

These findings revealed that opting for high-biomass-producing cover crops, such as pearl millet and sorghums, may hurt the following wheat grain production and quality. Producing high amounts of dry biomass during summer extracts considerable amounts of soil water and nutrients, such as nitrogen. Therefore, proper soil fertilization and faith in the weather are necessary when opting for a high-biomass-producing grass cover crop. Otherwise, opting for a drought-resistant, short-cycle legume cover crop may be desired. Consider that: 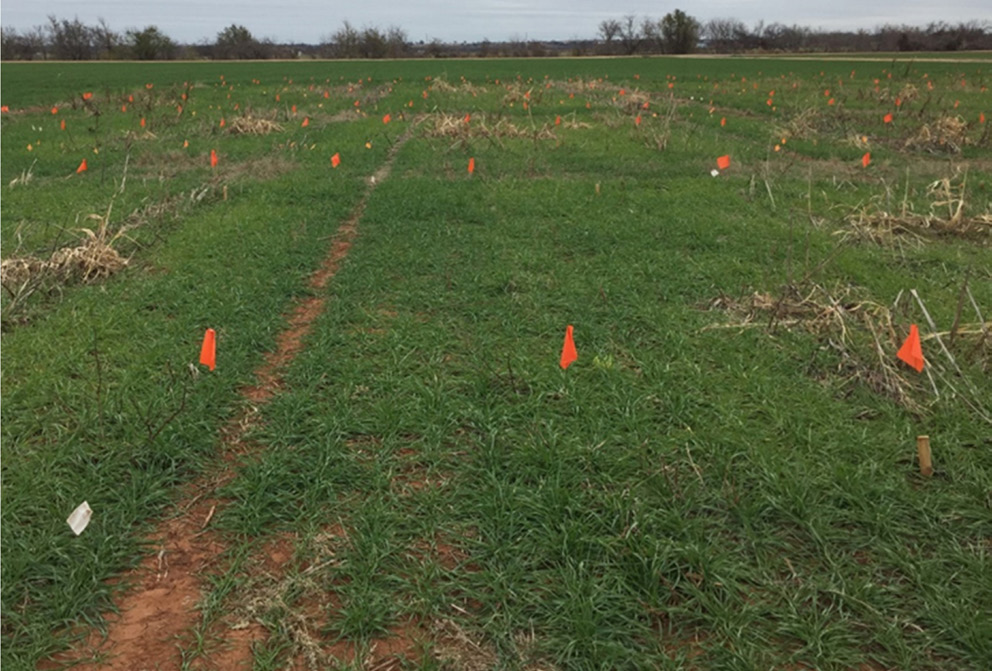 Figure 8. Wheat interseeded at cover crops at mid-November in Chickasha, 2016.