Powdery mildew is a fungal disease that affects many host plants, including ornamentals, shrubs, and trees. On some ornamental plants, such as rose, lilac, crape myrtle, oak and zinnia the disease can be very destructive. Severity of the disease depends upon many factors—variety of the host plant, age and condition of the plant, time of infection, and weather conditions during the growing season.

Although there are several different types of powdery mildew fungi, a lot of them produce similar symptoms on plant parts. Plant damage may range from an unsightly whitish powdery coverage of the foliage to drying out and browning of infected leaves. In some plants, buds may be infected and production of flowers, fruits, or nuts may be affected. If diagnosed early, powdery mildew can be effectively controlled to prevent severe damage to plants.

Powdery mildew fungi obtain nutrients from infected plants through haustoria (small root-like organs) that penetrate the outer or epidermal layer of cells. Unlike other fungi, the powdery mildew fungi can infect when very little moisture is present on the leaf surface and even under low humidity levels.

Some species of powdery mildew fungi can infect only a few closely-related host plants, while others may have a wider host range. Infection of one ornamental plant species by a powdery mildew fungus does not necessarily mean that other types of plants in the vicinity of the infected host will also be attacked.

The life cycle of all species of powdery mildew fungi is nearly identical. These fungi overwinter as small black fruiting bodies (cleistothecia) or as fungal threads (mycelium) on leaf debris and on stems, spurs, or dormant buds of plants. In the spring, the cleistothecia produce spores that initiate primary infections on susceptible hosts. Secondary spores called conidia are produced from these initial infections and cause repeated infections. Spores produced on over wintered mycelium can also start spring infections. The result of infection is the appearance of a white, powdery growth on the leaf surface. It is composed of fungal threads (mycelium) and chains of small spores. After the fungus has become established, small black fruiting bodies are produced. This completes the life cycle of the fungus.

The first sign of the disease is the development of a white to gray or slightly brownish growth of mycelium over the surface of leaves or other parts (Figures 1 and 2). Powdery mildew fungi may also attack stems, buds, and flower petals of various ornamental plants. Powdery mildew infection of broadleaf plants may cause distortion (curling and twisting) and a reduction in size of infected leaves (Figure 3). When older leaves become infected, they usually show only the white patches of the fungus. Infected leaves may become distorted, turn yellow, and fall prematurely. Infected buds may fail to open and infections can spread to mature flowers, causing a flower blight. Also, nuts of the pecan can be infected (Figure 4), causing a reduction in quality. 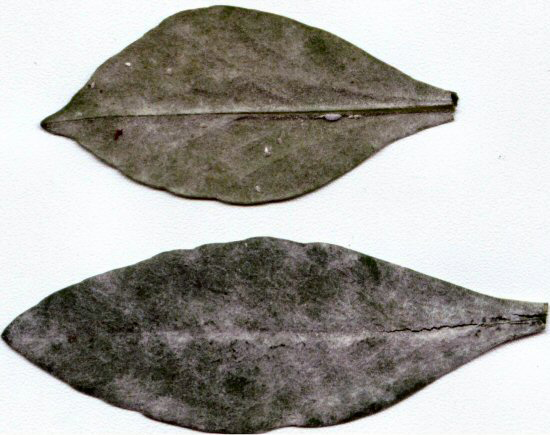 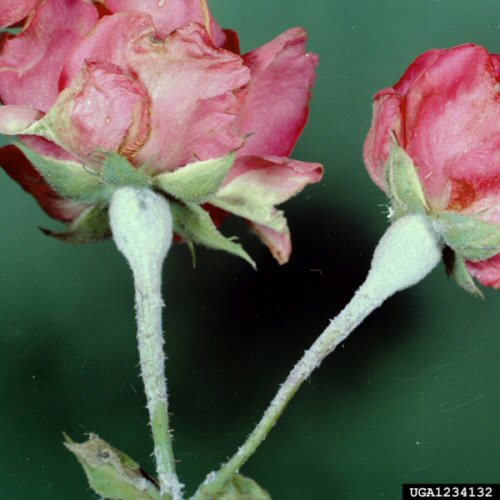 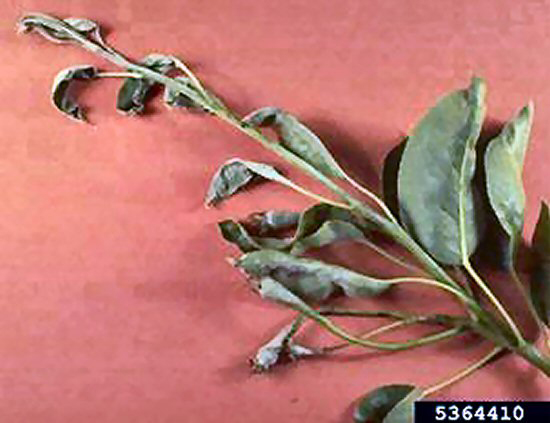 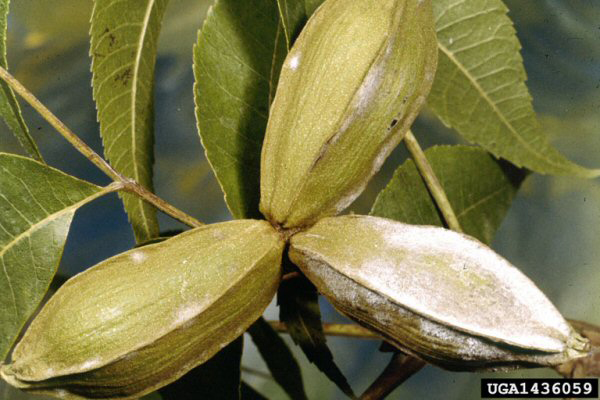 Powdery mildews are known to occur on almost all ornamental plants. Certain plant species and/or varieties are more susceptible to the disease than others. In Oklahoma, powdery mildews are common on ash, crape myrtle, lilac, oak, photinia, roses, and zinnia.

Humid conditions with widely fluctuating temperatures increase the occurrence of powdery mildew. The disease is common in crowded plantings where air circulation is poor and in damp, shaded areas. Young succulent growth is more severely affected than older tissues. Disease development is enhanced when cool, moist nights are followed by warm daytime temperatures.

Several practices will reduce or prevent development of powdery mildew. These practices involve reducing populations of the fungus in the vicinity of the host, changing environmental conditions around the host, and selecting more resistant varieties. Before plants are purchased, it may be to the homeowner’s advantage to inquire if the ornamental variety desired has any resistance to powdery mildew. If only susceptible varieties are available, avoid planting in low, shady locations. If powdery mildew becomes a problem, removal and destruction of infected plant parts, should be practiced. Pruning of crowded plant material will also help increase air flow around leaves. This reduces humidity and thus helps prevent infection. Late summer application of nitrogen fertilizer should be avoided to limit production of succulent tissue, which may be susceptible to powdery mildew infection in the fall. Water only in the mornings so that the foliage will be dry by evening.

If cultural controls fail to prevent disease build-up or if the disease pressure is too great, fungicide spraying may be necessary. The best course of action is to combine both approaches, using cultural methods as well as following a good spray schedule.
When powdery mildew has been a problem in previous years, a recommended fungicide spray schedule should be started in the spring as new growth develops. The fungicide should also be applied during the flowering period to avoid blossom blight. For suggested fungicides refer to the current circular E-832, OSU Extension Agents’ Handbook of Insect, Plant, Disease, and Weed Control. Be sure to follow the instructions on the label for use on specific applications.