Following drought, stand damage is readily apparent even on well-managed pastures. When drought occurs during active growth of warm-season grass pastures, it is almost certain that root growth will be restricted, in addition to the more obvious decline in forage yield. Extent of stand damage due to differences in soil types, fertility practices, grazing management, pasture species, and harvest management is somewhat easy to determine.

Following drought, summer pastures will exhibit varying degrees of damage. Recently established stands with sparse growth may have few plants present. Established pastures that were grazed for the majority of the summer can have moderate to severe degrees of damage. This damage will be almost entirely due to stocking rate. On the other hand, pastures managed solely for hay production should be less damaged than grazed pastures. This is due to longer growth periods during the drought that excluded grazing for several months during the drought. 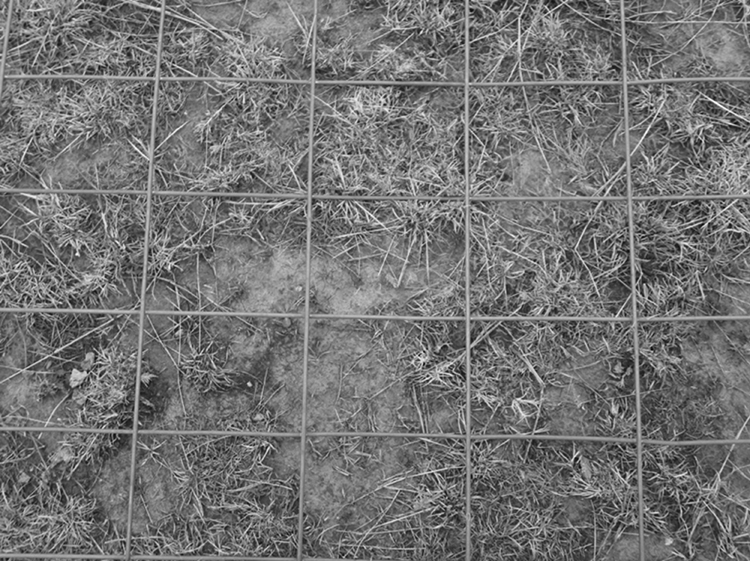 All perennial grasses have growth mechanisms that contribute to recovery of previously established stands.  Bermudagrass is unique in that it has stolons, in addition to rhizomes.  Although most of the above-ground stolons are likely dead, there are many rhizomes below ground in the plant crown that can produce new growth. The Old World bluestems and weeping lovegrass have rhizomes, but each of these plants also produces substantial seed in most years.  Similar to the bermudagrass, the rhizomes of the Old World bluestems and weeping lovegrass will produce new growth.  Much of the seed produced will be viable and capable of germinating and producing new plants if adequate moisture is present.

The best approach to post-drought pasture management is to reduce competition and focus on moisture conservation and use. First and most importantly, it is necessary that aggressive weed control measures are used to reduce competition for moisture and nutrients.  This allows the desirable plants the best opportunity for successful re-establishment of rhizomes and stolons in bermudagrass pastures and rhizomes along with germination of the seedbank in Old World bluestem and weeping lovegrass pastures.  Secondly, follow fertilization based on a proper soil test.  Since our recovery approach is to manage many of these pastures as a “new” seeding, it is important that our initial fertilization focus is on adding phosphorus (P) to stimulate root growth.  Lastly, it is important to prepare for grazing and harvest deferment.  Depending on the severity of the pasture damage, it may be necessary to restrict grazing on some of these pastures for longer than three months.

Many pastures appear as if there is no hope for reasonable recovery when conditions return to normal.  The restricted root growth is more of a concern during and immediately following drought since these are the structures responsible for extracting moisture and nutrients from the soil.  It is critical to focus on management practices that enhance root regrowth in order to facilitate pasture recovery.

Once favorable growing conditions return, there will remain lingering effects related to growth and competition.  Without a doubt, there will be increased weed competition and pressure from both grassy and broadleaf weeds.  Pasture growth will be slower, especially in overgrazed pastures due not only to weed competition, but also reduced energy reserves that promote early, vigorous spring growth.  Even with substantial rainfall, recovery of warm-season grass pastures is going to be difficult to predict.  Any pasture growth response to a management practice is going to be almost entirely dependent on available moisture.

The key to successful pasture recovery following a drought is patience.  The best approach to managing pastures that were overgrazed due the drought is to manage them as new plantings.  This includes aggressive weed control, fertility based on a proper soil test, and grazing deferment.  The obvious question is, if I can manage only one practice, which one do I choose?  The answer to this question is weed control.  However, it is important to recognize that additional fertility coupled with deferred harvest will result in more rapid recovery than a single management practice alone.

Weed control as a tool for post-drought recovery

Even though weed control is most important, it should not be made complicated by the number of commercially available pasture herbicides and premixes.  The key to successful weed control is timeliness.  From a forage production standpoint, it is best to spray a single time at an earlier date with a lower rate of herbicide, rather than too late with an increased herbicide rate.

The best control method for broadleaf weeds is with timely post-emergent herbicide application of products such as 2,4-D, dicamba, or other premixed pasture herbicides that contain these products.  For pastures with perennial, problematic, or noxious weeds, a premix with additional herbicide active ingredients and a broader level of weed control may be necessary.  Herbicides with broad spectrum control should be applied early when weeds are small.  This reduces weed growth and competition and more importantly, conserves moisture for forage grass growth.

Since drought-damaged stands should be managed as a new stand, plant P needs should be the primary consideration.  Standard P fertility recommendations are adequate for stands with slight to moderate damage, but stands with severe damage require additional P, even when soil test results indicate adequate available P levels (Table 1).

Since bermudagrass pastures respond quickly to supplemental fertility, the addition of 50 lbs nitrogen (N) per acre will increase the recovery once the stolons have reached 6 to 10 inches in length.  Nitrogen should only be applied if soil moisture is present.  Once bermudagrass pastures begin to show signs of recovery, additional N can be applied to increase production if soil moisture is present.  During drought or immediately following a drought, it is important that only enough N be applied for a 30-day production period based on the presence of adequate soil moisture.  For example, this would be no more than 75 lbs N per acre per month.

Neither Old World bluestem nor weeping lovegrass respond as quickly to fertilization as bermudagrass. However, each still have requirements for supplemental fertility. Similar to the recommendations for severely drought-damaged stands in bermudagrass, it is important to provide additional P when soil test results indicate adequate available P levels (Table 2). Additional N fertilization during the “new” establishment period for Old World bluestem and weeping lovegrass is not recommended since a small amount of N is present in many of the fertilizers used for P fertilization. During drought or immediately following a drought, it is important that additional N be applied only if adequate soil moisture is available. For example, this would be from 60 to no more than 75 lbs N per acre for the growing season.

Grazing and harvest deferment as tools for post-drought recovery

Since we are managing these drought damaged pastures as recent plantings, it is important that they have adequate time for establishment.  The single most important strategy for pasture recovery will be to avoid the temptation to begin grazing as soon as plants begin their spring growth.

Overgrazing coupled with severe removal of top growth develops plants with shallow root systems.  These plants need an opportunity to replenish their energy reserves and establish new root growth.  It may be necessary for pastures that were used heavily during the drought to not be grazed during the entire growing season.  In some cases, it may be necessary to use temporary fencing to allow for adequate grazing deferment.  Ideally, spring and summer grazing of heavily grazed pastures should not begin until the plants have at least four or five weeks of growth.

It is important to maintain a critical level of stubble height.  Under normal growing conditions, forage stubble height should be no less than 3 inches for bermudagrass and 5 inches for both Old World bluestem and weeping lovegrass.  This serves two purposes.  The first purpose is that the remaining leaf area provides the energy for plant growth.  During drought recovery, this is will increase root growth in addition to plant growth.  The second purpose is for soil coverage.  As the stubble breaks down, it forms a layer of litter on the soil surface.  This improves soil moisture retention and also reduces soil temperature.

The two best measures of pasture recovery following drought are stand thickness and forage height. These characteristics are often independent of one another, which means that a pasture may be thin and tall or it may be short and thick. While either of these two scenarios can be adequate during periods with favorable growth conditions, pasture recovery will occur more quickly when pastures are both thick and tall. To enhance the post-drought pasture recovery, it is important to consider the following pasture management practices:

Cool-season grassy weeds that are present can be grazed in winter or while the summer grass is dormant, glyphosate can be applied to control any remaining winter annual weeds with additional broadleaf weed control in the spring if needed. Following a proper soil test, any nutrient deficiencies, especially P, should be made prior to summer. Nitrogen fertilization can be applied during the summer based on available soil moisture.

While the summer grass is dormant, glyphosate can be applied to control any winter annual weeds with additional broadleaf weed control in the spring if needed. Following a proper soil test, any nutrient deficiencies, especially P, should be made prior to summer. Nitrogen fertilization can be applied during the summer based on available soil moisture.

Cool-season grassy weeds that are present can be grazed in winter or while the summer grass is dormant, glyphosate can be applied to control any remaining winter annual weeds with additional broadleaf weed control in the spring if needed. Following a proper soil test, any nutrient deficiencies, especially P, should be made prior to summer. Nitrogen fertilization can be applied during the summer based on available soil moisture.