Oklahoma’s Recovery from the Great Recession: Trends in Rural vs. Urban Areas

A recession is typically defined by economists as two consecutive quarters of negative economic growth, as measured by Gross Domestic Product (GDP).  The most recent recession, often referred to by economists as “The Great Recession,” began in late 2007 and continued until June 2009. Although national GDP growth turned positive at that point, the effects of this economic downturn would be felt for almost 80 months.  National employment levels dropped by more than six percent of their pre-recession peak numbers, and did not return to their pre-recession levels until 2014 (Figure 1). This is by far the longest recovery time for any recession since WWII. 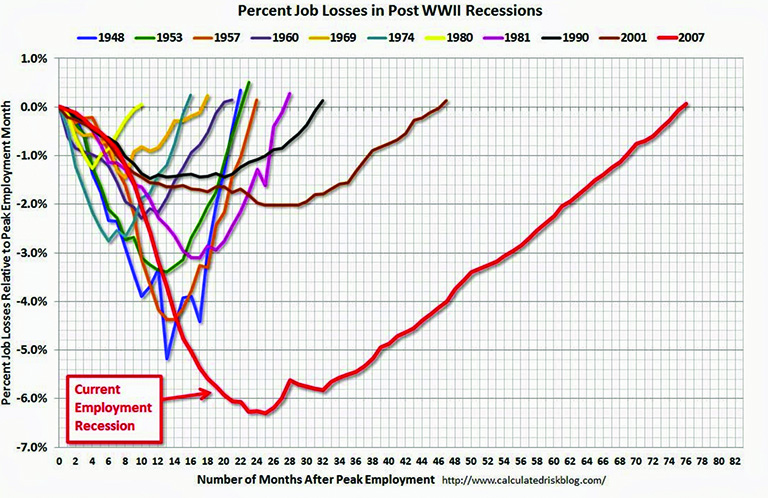 This report will document Oklahoma’s experience with the Great Recession, focusing on differences between rural and urban areas.  It will demonstrate that in terms of employment, Oklahoma was not hit nearly as hard as most other states, and that rural areas of the state have bounced back particularly quickly.

Nationally, urban and rural employment levels were affected similarly with a drop of slightly more than five percent from 2008-2009 (ERS, 2013). National signs of recovery began in 2010 in both metro and non-metro counties. However, the non-metro recovery slowed promptly as metro areas continued to improve.  From the second quarter in 2011 to the second quarter in 2012, metropolitan counties saw a 1.6 percent rise in employment (measured by number of jobs) compared to only a 0.5 percent increase in non-metropolitan counties.   National unemployment rates for metro and non-metro counties rose together to approximately 10 percent by late 2009, but fell slightly more rapidly for non-metro counties in 2010 and 2011 – mostly due to a decline in labor force participation (ERS, 2012).

Rural is defined at the community level and denotes a population of less than 2,500.

Non-metropolitan is defined at the county level and denotes counties without any cities of population more than 50,000 (Metropolitan Statistical Areas, or MSAs). Counties where more than 25 percent of the workforce commutes to an MSA are also considered Metropolitan.  Non-metropolitan counties are split into two distinct categories:

How Does Oklahoma Compare? 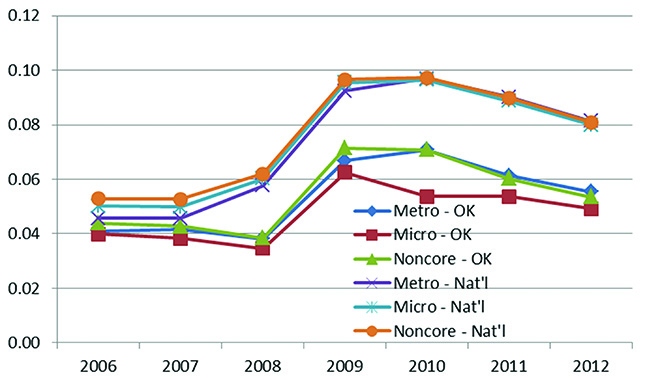 According to Bureau of Economic Analysis data, Oklahoma had completely recovered to 2008 peak job levels (2.2 M jobs) by 2012, significantly faster than the nation as a whole (Figure 1).

As an alternative to unemployment rates (which includes only those individuals who identify themselves as being in the work force), many economists argue that employment-to-population ratios are a better measure of labor market conditions (Appelbaum, 2014).  This measure includes all individuals in the working age population (age 16 and older) as opposed to only those in the workforce.  For the Great Recession in particular, long-term unemployment was strikingly high, leading many discouraged individuals to stop looking for work.  Once these people stopped looking for work, they were no longer included in the unemployment rate.  Employment-to-population ratios essentially measure the shares of adults with jobs – a different measure than only those in the work force. 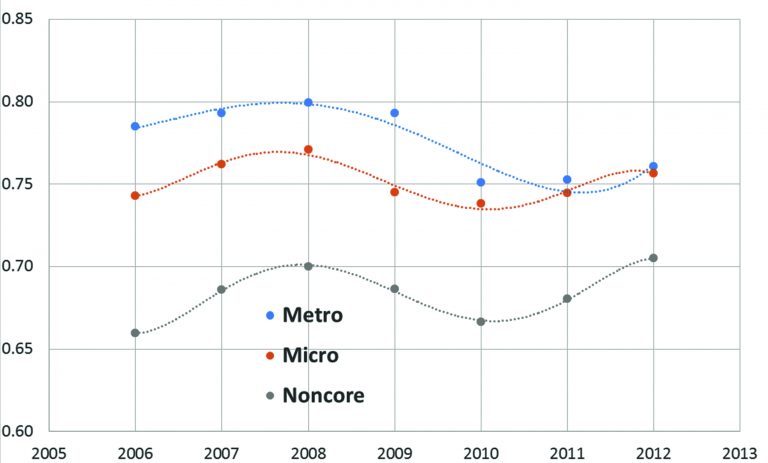 Overall, Figures 2 and 3 demonstrate that non-metropolitan counties (micropolitan and non-core) generally fared better than their metropolitan counterparts in terms of returning to previous levels of employment in Oklahoma.

Some industries across the nation were particularly hit hard by the Great Recession, including construction and manufacturing.  Others survived, and even thrived, as the recovery began, including a rush into oil and gas extraction fueled by hydraulic fracturing.  To explore whether the Great Recession resulted in meaningful industrial shifts for Oklahoma counties, we explored measures of industrial concentration known as “Location Quotients” (LQs).  LQs compare the concentration of a particular industry or occupation within a local area (like a county) to a state or national measure.

LQs can reveal what makes a particular region “unique” in comparison to the state level of concentration.  This type of analysis is important because it shows what industries are blooming in specific areas.  An LQ of greater than one implies that an area / county has proportionally more of the workforce employed by a specific industry than the region/state as a whole.   Note that LQs do not necessarily measure the ‘dominant’ industry within a county – it is entirely possible to have a sector with a large amount of employment, but a small LQ or vice versa.  Instead, LQs measure what the competitive advantage of that county might be.

The  primary interest is whether the highest-LQ industry in any Oklahoma county shifted between 2006 and 2012 – that is, if the recession or some other force caused a major change in a county’s competitive advantage.  Eighteen of Oklahoma’s 77 counties (24 percent) changed to a new highest-LQ industry during this time (Figure 4).  The average for the highest location quotient in each county of Oklahoma in 2006 was 3.91, meaning the proportion of employment in that industry was nearly four times the state average.  This average dropped to 3.80 in 2012. The highest location quotients in both 2006 and 2012 were in Comanche County (11.1 and 11.3 for military employment).  This was expected, given the dominance of Ft. Sill as an employer in the area. 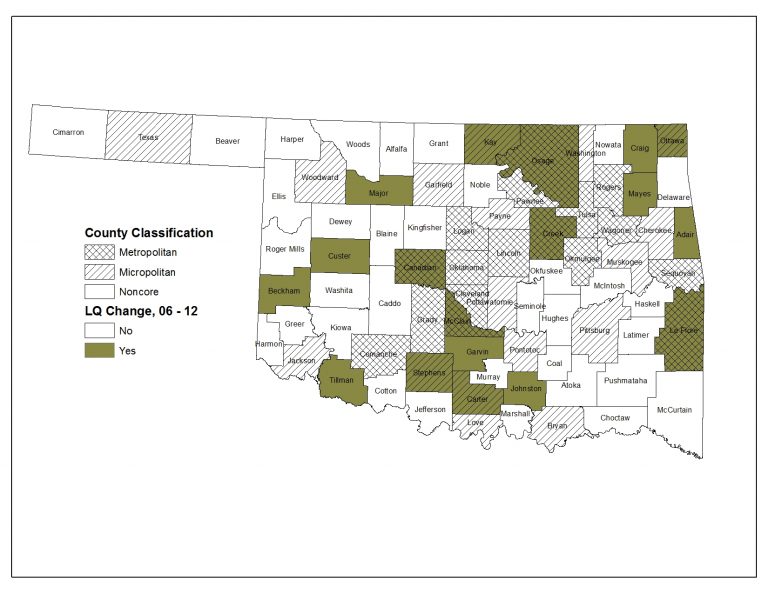 Figure 4. Oklahoma counties that changed industries with highest Location Quotient between 2006 and 2012.

Oklahoma has 17 metropolitan counties, and five of them changed their highest LQs during this period (29 percent).  Oklahoma also has 17 micropolitan counties, and four experienced a change in their highest LQ (24 percent).  Nine out of the 43 noncore counties saw a similar shift (21 percent).  (Note that these metro / micro designations changed in 2013.)  As Figure 4 makes clear, there does not seem to be a geographic pattern to where the changes occurred, although there is some clustering in the northeast and southern portions of the state.

Figures 5 and 6 show the industries with the highest LQs in 2006 and 2012, respectively.  Out of the 18 counties that shifted, five moved to farm employment; four shifted to mining; three shifted to forestry, fishing and related activities; three shifted to government; two shifted to manufacturing and one shifted to health care. This is a fairly diverse realm of industry change, showing that there wasn’t a single industry that became the new focus for competitive advantage across the state.  The industries that had previously demonstrated the highest concentrations were just as diverse, showing this shift wasn’t the result of the failure of a single industry. The two industries with the highest number of changes were farm employment and mining, showing a change in four counties each. 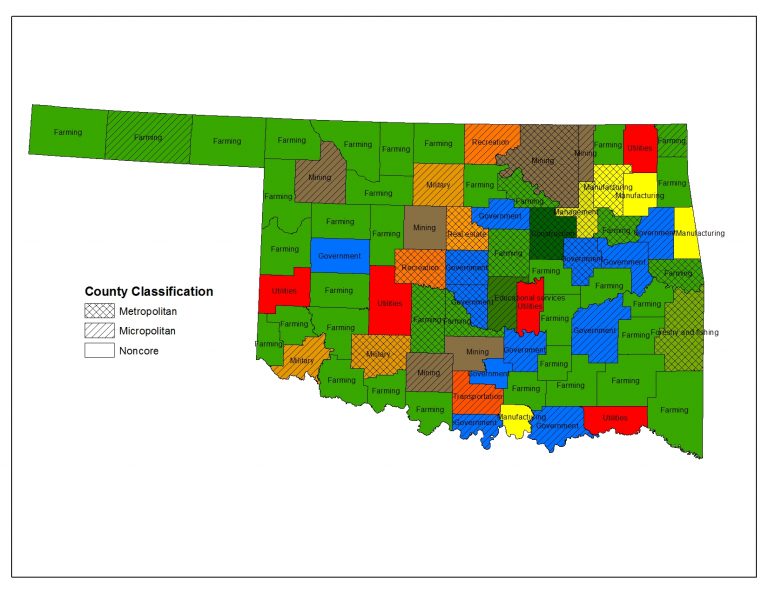 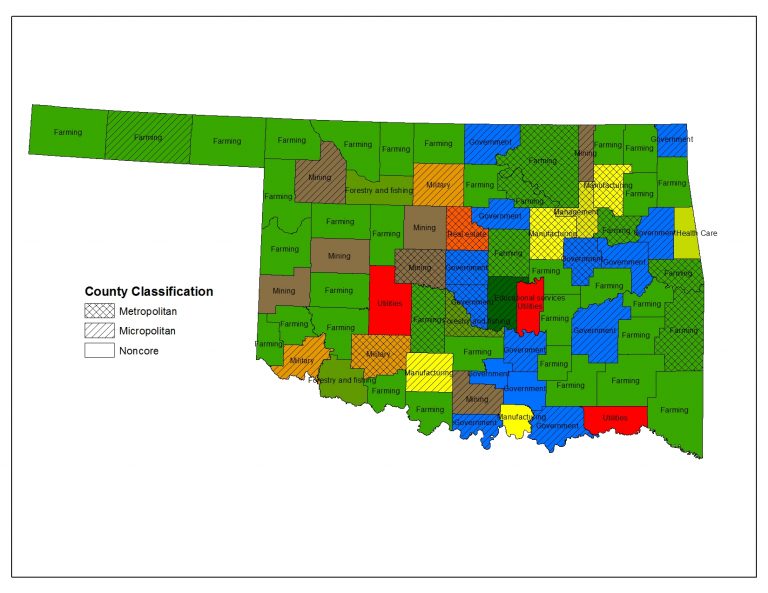 Oklahoma was late coming into the Great Recession, with signs of economic decline not becoming apparent until 2009. This is interesting to note because the rest of the nation began to have higher unemployment rates as early as 2008.  There could be several reasons for this, including the insulated nature of the financial industry in the state (many small, local/regional banks with conservative management practices), or a greater dependency on industries not dramatically affected by the recession.

Unlike the national trends, nonmetro counties (both micro and noncore) in Oklahoma showed a better recovery rate than their metropolitan counterparts. This is likely due to the success of both the farming and mining industries in Oklahoma, along with relatively well-diversified economies in many nonmetro counties.

The majority of counties (76 percent) did not change industries with the largest location quotient between 2006 and 2012, demonstrating that the Great Recession did not dramatically alter the competitive advantage for most Oklahoma counties.  Interestingly, while some counties benefited from newly found jobs in the oil and gas industry, others went away from the mining industry during this time frame (four counties – mostly in the west – switched to mining as their highest-LQ industry, and four counties – mostly in the east – switched from mining to some other industry).  Farming remains a dominant industry in many noncore counties across the state, with 31 of 43 counties having farming as their highest LQ industry in 2012 (72 percent).

As the Oklahoma economy moves forward, it will be important to continue to monitor growing and shrinking industries.  Future county- or state-level policies should take into consideration the history of economic growth in the area and how local labor markets have responded to shocks such as those seen during the Great Recession.