Native hay meadows are an important part of Oklahoma’s landscape and most occur east of I-35. Native hay meadows provide hay for livestock supplementation, habitat for wildlife and a refuge for biological diversity. Unfortunately, some native hay meadows are mismanaged because of late harvest, cutting more than once in a growing season and/or cutting too short. As a result, many of these meadows have reduced production potential.

One overlooked management practice that would greatly benefit native hay 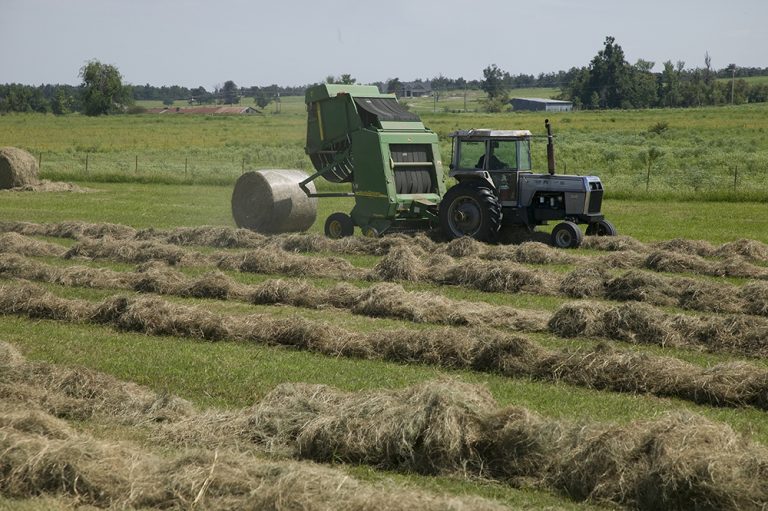 meadows would be a system that alternates hay production and cattle grazing at a light stocking rate every other year. An old range management “rule of thumb” is to never do the same thing to the same place every year. In other words, vary your management practices.

The key to managing native hay meadows is to maintain the balance between forage yield and forage quality. This is determined primarily by the time of cutting. For example, highest yield and highest forage quality never occur at the same time. Maximum hay yield occurs in late August with maximum crude protein and digestibility occurring in May. Thus, optimizing harvest of the native hay meadow requires harvest between July 1 and 10 with a cutting height of no less than 4 inches. With modern haying equipment, it is possible to harvest hay to stubble heights that are less than one inch. However, this will cause the hay meadow to decline in productivity over time and should absolutely be avoided. The reason cutting height is important is that native grasses elevate their growing points during this period. If the growing point is cut off, plant production will be reduced for next year’s growing season. Switchgrass, one of the big four native grasses, will be the first to disappear from the meadow and is an excellent “indicator” of hay meadow management.

The slow re-growth of native grass is a characteristic of native species. These grasses grow rapidly from May 1 to July 1. Following harvest, little re-growth occurs. Approximately 70 percent of the production occurs before July 1 for most years. The slow re-growth of native plants appears to support the theory that the evolutionary survival mechanism of these very palatable species is limited re-growth potential. The re-growth after harvest (July 1) occurs at the expense of root carbohydrate storage and will impact next year’s growth. If these palatable native species had rapidly produced re-growth, they would probably have been grazed repeatedly and would have eventually disappeared. Thus, native species have adapted through natural selection and developed a survival mechanism to guard against exhaustion of root carbohydrate reserves. This is the primary reason that native hay meadows should only be harvested a single time during the growing season.

Since 1929, there have been numerous research studies on fertilizing native grasslands in Oklahoma. Most of the fertilizer rates have varied from 30 lbs to 80 lbs of nitrogen per acre. When adequate moisture is available during spring and early summer growth, nitrogen fertilizer will increase hay yield and crude protein. However, research done by OSU scientists in 1958 concluded that fertilization with either nitrogen, phosphorous, or combinations of both did not provide an economical response even when fertilizers were relatively inexpensive. Today, fertilizer costs are much higher, therefore fertilizing native hay meadows is not recommended.

Properly managed hay meadows should have seed heads of desirable plants showing by the end of the growing season and appear vigorous. However, this can present of problem with forage quality for next year’s hay crop because the past year’s growth will be mixed with current year’s growth. One way to overcome this problem is to allow cattle to graze the hay meadow’s dormant growth with a protein supplement after November 1. Another technique is to burn the meadow during the dormant season. Either method will eliminate last year’s growth from being included in the current year’s hay production.

An explanation to limit feeding of beef cows, some management tips to keep the herd healthy and alternatives to corn in limit feeding.

A summary of important physical factors such as sight, smell and feel that should be considered during visual hay inspection.