During the past decade, the U.S. has seen a large increase in the use of an oil and gas extraction process known as hydraulic fracturing. During this same time, news reports and movies showed tap water catching fire. Citizens are concerned about their drinking water wells and possible risks posed by nearby hydraulic fracturing. What are these risks, and what can be done about them? This Fact Sheet will address those questions and will be updated periodically.

What is Hydraulic Fracturing?

Hydraulic fracturing is a technique used to release difficult-to-access oil and gas.  The process is also called well stimulation.  The slang terms “hydrofracking,” “fracking,” “fracing,” and “fraccing” are used by the public and opponents, but are usually considered derogatory by the industry.  Hydraulic fracturing was originally developed in the 1940s as a way to get more oil and gas from wells that were no longer productive.  Recently, fracturing has been combined with horizontal drilling to produce oil and gas from new formations that would not be economical otherwise.

In a typical hydraulic fracturing operation, a company begins by drilling a vertical hole (called a wellbore) to reach the shale layer.  The first step is drilling and cementing in place surface casing, which typically goes down 500 feet and is intended to isolate the well from any potable groundwater. The wellbore proper is then completed.  The depth of the well depends on the formation the well is trying to reach.  For example, Oklahoma’s Woodford Shale formation typically runs between 6,000 and 12,000 feet in depth.  However, it is relatively thin.  In many areas, the Woodford Shale is only 125 feet thick.  This is why horizontal drilling is important.  Horizontal drilling allows the drilling bit to turn laterally and drill horizontally through a layer of rock.  If the formation is of average thickness, a vertical well would only affect 125 feet of the formation.  Horizontal wells, on the other hand, can affect several thousand feet of the formation.  Once the horizontal portion of the well is drilled and well casing is in place, the fracturing process can begin.

The Hydraulic fracturing fluid is largely water, but includes small amounts of several other chemicals discussed below.  An important part of the fluid is its “proppant.”  Proppants are used to hold the fractures open.  These proppants can be processed sand, small ceramic spheres, aluminum oxide beads, or other materials.

The next step is to pump the hydraulic fracturing fluid back to the surface. It is then stored in lined pits or tanks until it is either reused on another hydraulic fracturing job or disposed.  In Oklahoma, the fluid is usually disposed by pumping it deep underground into a licensed disposal well.  After these steps, the well is ready to produce oil and natural gas. 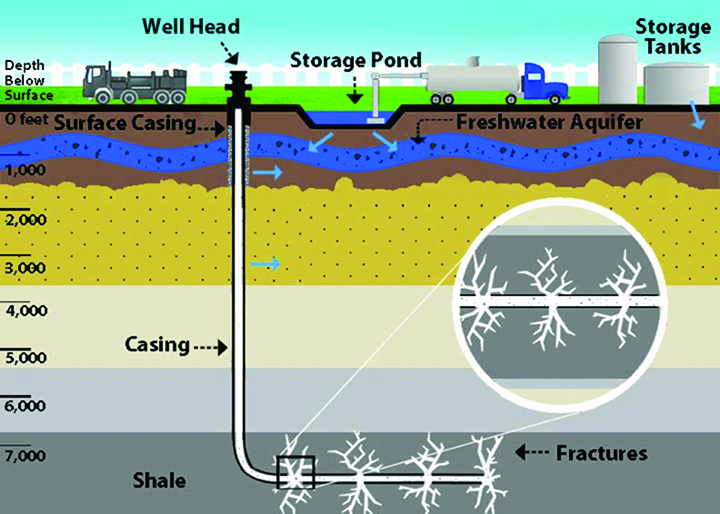 What Chemicals/Substances are Used in the Process?

Chemical additives are used to optimize the fracturing process; each chemical having a unique purpose. For example, biocides (germ killers) are added to prevent microbial growth from clogging flow paths. Friction reducers minimize friction between the fluid and the pipes. Weak acids dissolve minerals and improve fracture formation. The types and amount of chemicals added vary depending on the specific characteristics of the formation and the well. Table 1 lists the chemicals used in a fracturing operation in the Fayetteville Shale as an example of the types and amounts of chemicals used in a typical hydraulic fracturing operation. It should be noted that all of these compounds, except for the corrosion inhibitor, N,N-dimethylformamide, can be found in household products.

Table 1. An example of the volumetric composition of hydraulic fracturing fluid.

ª Based on 3 million gallons of fluid used.

For years, companies did not disclose the chemicals used in their hydraulic fracturing fluids, since they consider them a trade secret.  That trend is changing though.  More and more companies are voluntarily disclosing the chemicals used in hydraulic fracturing.  Companies are also trying to reduce the amounts of chemicals used. Awebsite has been established where companies can report the chemicals used in their fracturing fluids.  The website is run by the Ground Water Protection Council and the Interstate Oil and Gas Compact Commission.  Beginning in 2013, Oklahoma requires oil and gas companies to report their fracking fluid composition for horizontal wells to the FracFocus site or to the Oklahoma Corporation Commission. Beginning in 2014, fluid composition for all wells must be reported.

In addition to the chemicals used to create the fracking fluid, minerals in the underground formations can also become dissolved in the fluid that returns to the surface.  Common dissolved elements include sodium, calcium, and chloride. Naturally occurring contaminants, such as arsenic, may also be mobilized from the formation.

How Could this Affect Your Well or Drinking Water?

One study identified 944 chemicals used in hydraulic fracturing. Although these chemicals are a small portion of the fluid and would be further diluted by contact with any groundwater, some are known to pose health risks, depending on their concentrations and a person’s exposure. More research is needed to determine whether these chemicals used in hydraulic fracturing pose a substantial risk to human health or the environment.

While there may be a risk to drinking water wells from sub-surface activities, there are also significant risks of water contamination from the handling of drilling fluids on the surface, including storing, moving, and disposing of the fluids.  These activities are riskier because they take place much closer to the fresh groundwater. Groundwater in Oklahoma is often located within 500 feet of the surface.  Fracturing takes place well below the groundwater with thousands of feet of rock between the groundwater and the fracturing zone.  However, there are risks that connections between the well bore, the deep formations being fractured, and the fresh water near the surface may exist. These connections can include abandoned wellbores or failure of the well’s surface casing within groundwater zones.

In Oklahoma, used fracturing fluid is either disposed of through deep well injection or recycled for use in other jobs.  Deep well injection is the injection of the fluid thousands of feet below the surface.  This practice is used by several industries in Oklahoma.  Recycling fracturing fluid is a new process that is becoming more popular.  It can reduce the risks of fluid disposal, and can also reduce the amount of fresh water needed for oil and gas production.

What Does Industry do to Protect the Groundwater?

Oklahoma has rules that apply to the oil and gas industry for the protection of surface water and groundwater, including how to build, operate, and close wells and disposal pits. These requirements include lining the well bore with steel pipe (casing) and reinforcing it with cement. These reinforcements must go down to a depth 50 feet below the bottom of the fresh groundwater zone or 90 feet from the surface, whichever is greater. There are also rules that address the location and lining of waste pits and cleanup of spills¹.

Concerned about Your Groundwater Well?

It is recommended that owners of private water wells near oil and gas operations have their water tested.  These tests should be done within 6 months prior to any oil and gas activities near the water wells.  In some cases, drilling companies are now doing this testing for homeowners free of charge. If in the future, it is suspected that hydraulic fracturing has polluted the groundwater, the well may be tested again to determine if any of the chemicals in the fracturing fluid are present or if the general water chemistry has changed.

If a well is tested because of concerns about hydraulic fracturing, it is recommended that the analysis include at least those parameters shown in Table 2.

** OSU’s Soil, Water and Forage Analytical Laboratory provides tests mainly for agricultural purposes and it is not an EPA or DEQ certified facility for drinking water analysis.

*** Hydraulic fracturing is not considered a source of bacteria, but drinking water wells should be tested regularly.

Agencies Responsible for Regulating the Process of Hydraulic Fracturing

The Oklahoma Corporation Commission regulates oil and gas extraction in the state. Their mission is “to provide information, permitting, investigation, and compliance services to the oil and gas industry, mineral interests, landowners, and the general public so together we can develop the oil and gas resources of the state in a fair and orderly manner while protecting the environment and ensuring public safety.”  Information on their activities in the state can be found at Oklahoma Corporation Commission.

The Oklahoma Water Resources Board issues permits for water used in oil and gas exploration including hydraulic fracturing. Typically, these are provisional temporary permits issued to the company for 90 days. However, a land owner can also obtain a permit for the use of water on his land that will be sold to an exploration company. Permits can be obtained online.

How Much Water does Hydraulic Fracturing Use?

Several factors affect the volume of water needed to hydraulically fracture a well. Wells to deeper formations and/or longer horizontal legs require more water. Many horizontal legs are one mile in length and well depths range from less than 1,000 feet to more than 12,000 feet. Some well sites have multiple wellbores that also require more water. Typical volumes for horizontal wells in different shale formations range from 2 to 5 million gallons of water per well. While this is a large amount of water, it is less than the amount of water used annually to irrigate one quarter-section of most crops in a dry environment.

The Oklahoma Department of Environmental Quality (responsible for water quality

Modern Gas Shale Development in the United States: A Primer from the US Dept. of Energy’s National Energy Technology Laboratory

A guide for understanding alfatoxins, the affects that they have when in the feed and reducing the risk of aflatoxin exposure to wildlife.