Grasshoppers have been a visible, frustrating pest of rangeland, field crops, and gardens since Oklahoma was first settled. While we do not encounter spectacular, widespread grasshopper outbreaks like those seen in the Great Plains 100 years ago, they occasionally build up in numbers and cause problems over hundreds of thousands of acres of rangeland, pasture, and row-crops in Oklahoma. It is a challenge to manage grasshoppers because it is difficult to predict if, and when, they will become a problem. Often large numbers of grasshopper nymphs hatch in an area, but as time, weather, and natural enemies take their toll; they fail to develop into a severe problem.

Grasshoppers can damage crops anywhere in Oklahoma, but are more likely to become a threat in areas that receive less than 30 inches of annual rainfall (see Figure 1). Because Oklahoma is subject to periods of drought, other parts of the state may fall below that 30-inch threshold for several years. In addition, the timing of rainfall can substantially lower survival of eggs and nymphs in a given area. Thus, we sometimes see grasshoppers become a problem in isolated pockets across the state for a few years, and then subside.

Over 130 species of grasshoppers reside in Oklahoma. Most never attain pest status because they are either not large enough or don’t become numerous enough. In rangeland and pastures, grasshopper problems develop from a “complex” of species that tend to occur together and build in numbers large enough to cause damage. The most economically important species in rangeland and pastures are the twostriped slant-face, migratory, two-striped, redlegged, differential, and Packard grasshoppers. 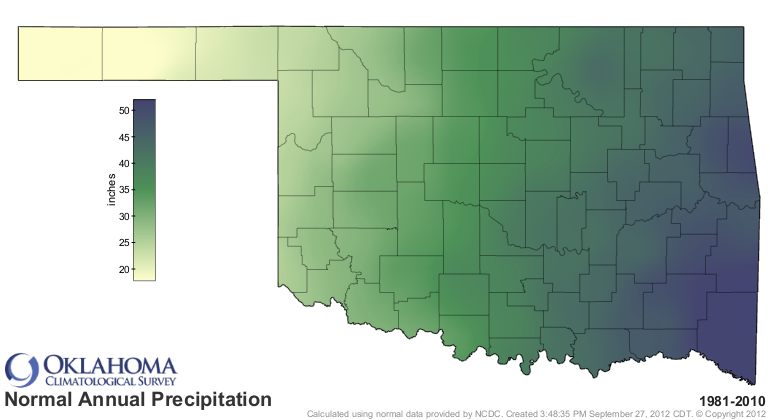 Grasshoppers produce one generation each year (except for the migratory grasshopper, which produces 2 generations per year). Grasshoppers have three stages; the egg, nymph, and adult. The majority of grasshoppers overwinter as eggs, but a few overwinter as immature nymphs. In late summer and fall, eggs are deposited in the soil in “pods” that contain from 8-30 eggs. Embryos begin to develop, become “quiescent” through the winter, and resume development in spring. Eggs hatch in the spring, with specific hatching time affected by weather, especially soil temperature. Each species develops at its own rate, so we tend to see a continuous flush of hatching grasshoppers over several months. Cold winters have little effect on eggs because the pod and surrounding soil provide insulation from extreme cold.

Nymphs start to feed within a day of hatching, usually on the same plants that they will feed on as adults. These small nymphs are most vulnerable to weather, disease, predators, and parasites. They grow through 5 nymphal instars, shedding their exoskeleton each time, and become adults in 40-55 days after hatching.

Grasshoppers compete for forage with cattle. If enough grasshoppers are present, they can reduce the quality and quantity of forage that is produced. This can affect the rancher’s ability to use the pasture effectively for grazing. Grasshoppers consume up to 50% of their body weight every day in forage. Cattle consume abut 1.5-2.5% of their body weight in forage, so pound for pound, a grasshopper will eat 12-20 times as much plant material as a steer. Another way to look at it is that 30 pounds of grasshoppers will eat as much as a 600-pound steer. In addition, some grasshoppers feed on the most desirable forage plants in the rangeland, leaving the less desirable plants. Their feeding, if coupled with drought conditions, can cause long-term deterioration of the forage plant community.

Grasshopper populations can be assessed through several methods. The square yard method requires the surveyor to walk in a straight line across an area, visually delineate a square yard area about 9-12 feet in front of the surveyor, and simply count the number of grasshoppers that can be seen jumping out of the space. About 30 samples should be taken each spaced about 75 feet apart. Take an average of the counts to determine grasshopper population densities.

Ranchers may find it hard to judge whether grasshopper control is economically warranted. Since grasshoppers compete with cattle for forage, they can reduce the “quality” of the rangeland in much the same way that cattle can through overgrazing. On the other hand, grasshoppers serve as a valuable food source for wildlife, especially game birds, a fact that must be considered when making grasshopper management decisions in rangeland.

Ranchers can minimize grasshopper damage by properly managing their range according to accepted practices. Healthy, desirable rangeland is less prone to long term damage. The following publications are available from Oklahoma State University:

Grasshopper control in rangeland is probably never justified until numbers exceed 12 per square yard. Even then, the threshold for treating varies with the cost of the insecticide treatment, the projected forage yield, and value of the area. The best time to control grasshoppers is from mid-May through about July 1, while they are immature. Grasshopper control is more effective if practiced over large areas because grasshopper adults can fly for miles to search for suitable food. If infestations are detected early, an insecticide application in the egg-hatching areas (fencerows, grassy terraces and roadside ditches) can effectively reduce numbers so that chemical control may not be needed later. There are three options that a producer might consider:

Spot Treatments in Hatching Areas or Border Sprays: Grasshopper eggs are often deposited in concentrated egg-laying sites, such as pastures, ditches, and field margins that were not tilled. Grasshopper nymphs tend to remain concentrated in their hatching areas for some time after they emerge, so applying an approved insecticide as a spot treatment in those areas can effectively reduce grasshopper numbers in a local area.

RAAT Treatments with Diflubenzuron: Two recent developments offer an economical and environmentally friendly way to manage grasshoppers in rangeland or pasture. The first development is the registration of diflubenzuron (Dimilin) for use in rangeland and pastures to control grasshoppers. Diflubenzuron has several qualities that are appealing from a human and environmental safety standpoint. It works by interfering with the molting process of grasshoppers, and must be ingested to be effective. Because of diflubenzuron’s specific activity on the invertebrate molting process, it is very non-toxic to vertebrate wildlife. It must be directly ingested to be effective, so it has minimal impact on beneficial or non-target insects. Finally, it is inexpensive to purchase compared to other registered products.

The second development is a grasshopper IPM program called a Reduced Agent and Area Treatment (RAAT). This is a chemical control strategy in which the rate of the chemical is lowered, and applied in alternating treated and untreated strips. A RAAT treatment will probably reduce application costs by 50-60%. It takes advantage of the grasshopper’s natural tendency to move as they feed. As grasshoppers move from untreated to treated areas and eat foliage treated with diflubenzuron, they are killed once molting occurs. Another benefit of a RAAT application is that it does not cover the entire landscape with a pesticide application. This reduces any impact of the application on non-target organisms. The bottom line is that 65-70 percent less insecticide is applied compared to conventional broadcast treatments. The RAAT system provides up to 85% control of grasshopper numbers, depending upon the rate of growth of the forage, the size of the grasshoppers and the coverage obtained. RAAT applications can be made with aerial or ground equipment. Currently, diflubenzuron is the only insecticide that specifically allows a RAAT application.

Broadcast Applications: A producer can apply an approved insecticide as a spray or bait in broadcast application to control grasshoppers. However, such an application should be economically justified beforehand because it is expensive. It may be justified in improved pasture, where the producer is harvesting hay as a cash crop. A producer should consider the cost of supplying hay versus spraying before making such a decision to treat in a grazing situation.

Although grasshoppers may defoliate alfalfa in areas adjacent to field borders, they pose a more serious threat in fields used for seed production. In these areas, grasshoppers will preferably feed on fruiting structures when the crop is in bloom, causing heavy losses of the seed crop along the field margins. Similarly, if grasshopper populations remain high into the fall, seedling stands of recently-planted alfalfa can be devastated. Although many chemical options are available for grasshopper control in alfalfa, the greatest impact can be realized by targeting populations in areas adjacent to alfalfa fields before grasshoppers reach maturity in June. Regardless of the age of an alfalfa stand, this management approach will help in avoiding applications targeted at adult grasshoppers, which are difficult to control. In the case of fields used for seed production, early management in border areas will prevent serious losses of seed and preserve beneficial organisms and pollinators.

For a list of the chemical options available for grasshopper control in alfalfa, find a copy of OSU Extension Fact Sheet EPP-7150 or consult the following website: www.agr.okstate.edu/alfalfa. 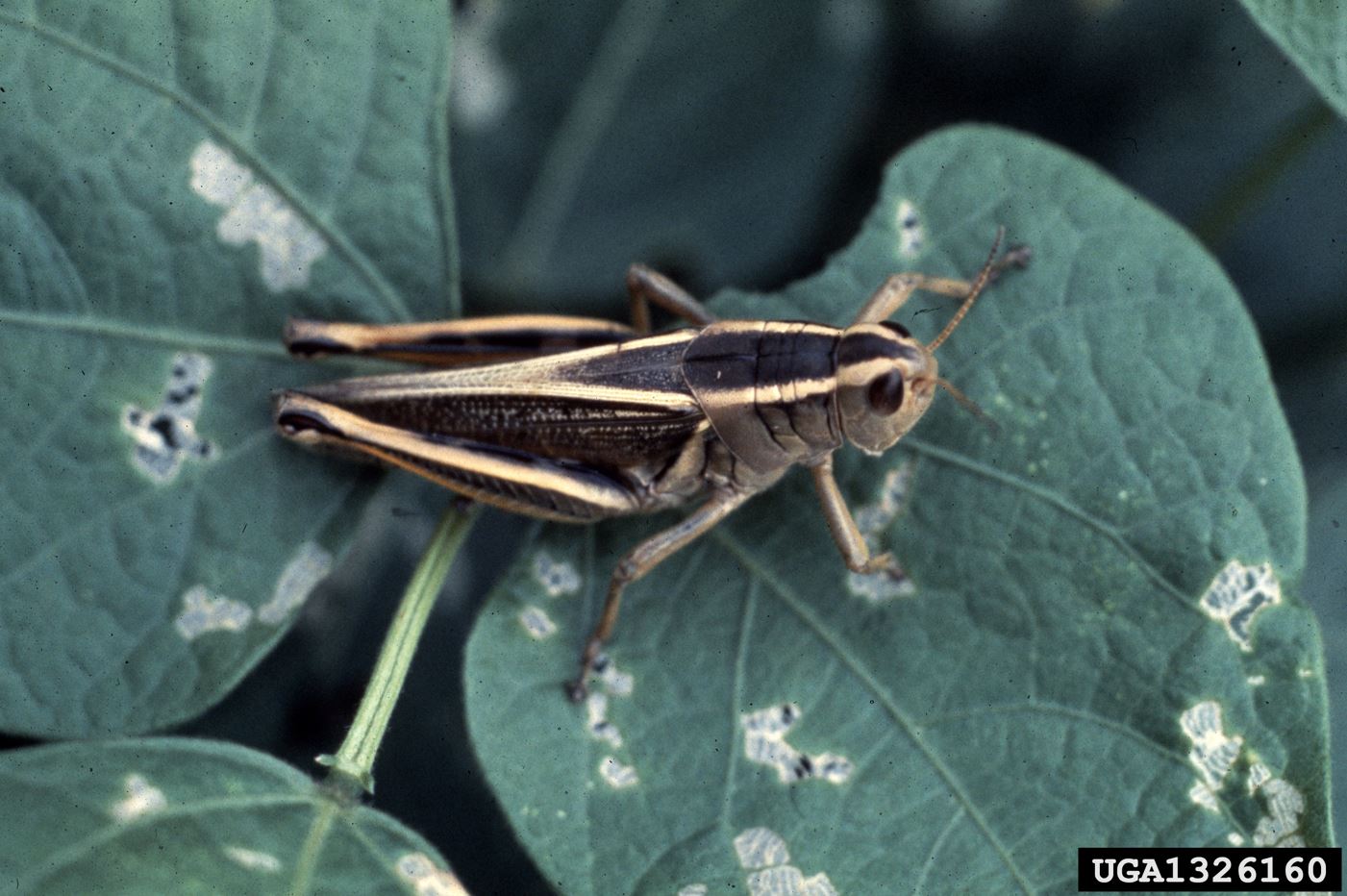 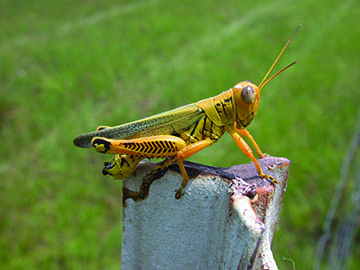 Grasshoppers can become a problem in row crops and small grains. They tend to injure corn, soybean, and wheat, and do not feed heavily on sorghum or peanuts. Corn and soybean are likely to suffer defoliation in late summer and fall, including damage to the ear of corn or the soybean seed pod. Winter wheat is more vulnerable to damage in the fall which can result in stand loss. More often than not, damage occurs in the first 50 to 100 feet on the field border as grasshoppers move in from roadside ditches.

There are no fixed thresholds for control, but the following guidelines were provided by the University of Nebraska: