Forage species are primarily stocked in private waters throughout the Southeast as a food source for largemouth bass and other predator species. Unfortunately, the ideal forage species for all management situations does not exist. Therefore, managers often attempt to maximize largemouth bass production by stocking a multi-forage base. In many southeastern states, private landowners must rely on private hatcheries as sources for appropriate forage species.

The bluegill is the best known 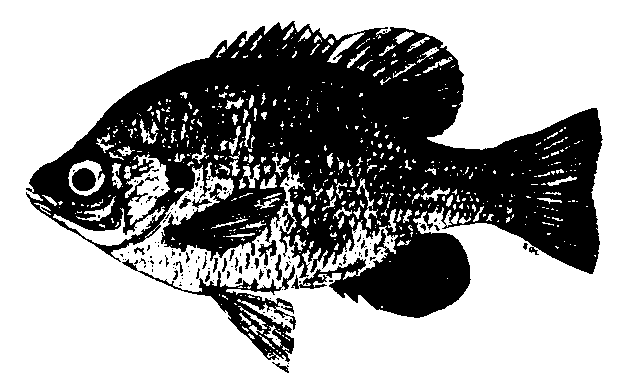 member of the sunfish family, originally ranging from the Mississippi, Great Lakes, and Eastern Seaboard drainage basin. However, because of its adaptability, the bluegill has been widely introduced across the United States.

The bluegill has a deep, compressed head and a very small mouth. Its ear flap is broad, short, and colored blue or black. A distinct, irregular dark spot is present on the posterior of the dorsal fin. Colors may vary with sex and water quality, but normally several vertical bars are visible along the sides. The bluegill is widely stocked as both a sport and forage fish.

Bluegills are highly regarded as a forage species because of their capability of spawning numerous times during the warm months. Spawning is initiated in the spring when water temperatures reach 75° F and continues until water temperatures cool in the fall. Bluegill are colony spawners, with males often fanning out 50 or more circular nests in areas 1 to 5 feet in depth.

Bluegill mature at lengths of 3 inches with females capable of laying between 10,000 and 60,000 eggs per spawn. Eggs hatch in three to five days depending on water temperature. No parental care is provided after hatching.

Young bluegill feed primarily on plankton switching to a diet of insects and other small aquatic life as their size increases. Bluegill also feed on the eggs and fry of other fish species.

The bluegill is a sunfish preferring static, clear waters of ponds, reservoirs, and sluggish streams. This species seldom strays far from shore and prefers structures such as weed beds, fallen timber, pilings, etc. 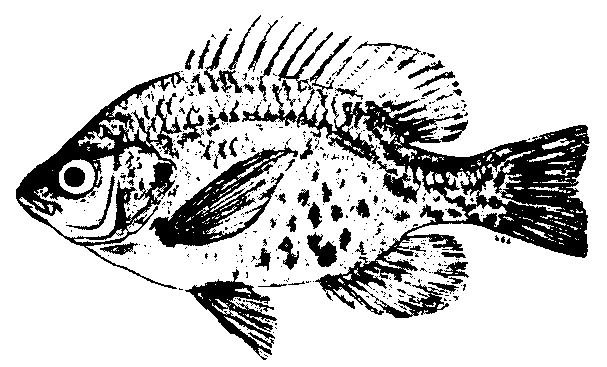 may be found from Missouri to Indiana and south to Florida and Texas.

The redear sunfish is dark olive above, yellow to green on the sides and shading to almost white on the belly. The ear flap is black with a red to orange spot. Like the bluegill, the redear sunfish has a small mouth. This species is stocked as a sport and forage species throughout its range.

The spawning habits of the redear sunfish are similar to those of the bluegill, although this species does not have such a prolonged spawning period. Redears are also more of a bottom dweller than bluegills and therefore spawn in deeper water. A preferred food item of the redear is aquatic snails, hence the name “shellcracker” is often used for this species.

The threadfin shad is a member of the herring

amily and ranges from Florida to Mexico and northward. Introductions of threadfin shad as a supplemental forage species have greatly increased its range. The threadfin is susceptible to winterkill at water temperatures of 42° F, limiting its range northward.

The threadfin shad appears to be an excellent forage fish because it is short lived, grows only to a maximum size of 7 to 8 inches and schools in large numbers. The threadfin shad is very similar to gizzard shad in appearance but can be distinguished by its terminal mouth and yellowish fins.

A pelagic (open water) schooling species often stocked as a supplemental forage, threadfins spawn in the spring and early summer with a secondary spawn often occurring in the early fall. Spawning usually occurs early in the morning on available vegetation. The eggs adhere to submerged and floating objects. Females lay from 2,000 to 24,000 eggs.

The golden shiner is a member of the

minnow family that originally ranged from Saskatchewan to Quebec and southward to Florida and South Central Texas. Its value as a commercial baitfish has led to an increase in its range west of the Rockies.

The golden shiner is a deep-bodied minnow with large silver or gold-colored scales that are rather loosely attached. The lateral line is deeply decurved.

Golden shiners prefer ponds and the shallow water of streams throughout its range. Females grow faster than males with maturity occurring at 1 year of age. Spawning begins when water temperatures reach 70° F and continues through June. The females lay up to 10,000 eggs in vegetated areas. Young hatch in four to eight days and like adults, feed on both plant and animal life.

The fathead minnow is indigenous to

Central North America, west of the Appalachians and south to Mexico. However, the species has greatly increased its range because of its common use as a bait and forage fish.

The fathead minnow is cylindrical in shape and has a terminal mouth and small, crowded scales. Color is typically olivaceous above, grading to tan or creamy white below. However, strains of bright red individuals (called Rosey Reds) have been genetically selected and bred over the past several years because of their increased visibility. Total length seldom exceeds 4 inches.

Both sexes reach maturity at one year of age. Mature males are larger than females and become dark in color and develop breeding tubercules on the head during spawning season.

Spawning begins when water temperatures warm to approximately 65° F and continues during cool periods throughout the summer. Females produce from 200 to 500 eggs per spawn and prefer to lay their eggs on the underside of submerged objects. The females will spawn repeatedly and have been observed to lay over 20 batches of eggs/year. Fatheads feed on small aquatic organisms.

Management and production practices of Old World Bluestem in the forage and beef industry.

The differences and adaptability of bermudagrass varieties in Oklahoma.

Consider the most important soil and weather factors when deciding which Bermudagrass variety to establish.