Selecting the most appropriate variety of Bermudagrass is important when establishing perennial pastures. Variety will dictate the potential forage yield and quality for many years to come. Establishment method (sprigging vs. seeding), winter hardiness, site-specific adaptations, growth morphology (grazing vs. hay types) and forage quality are all traits that must be considered when deciding which Bermudagrass variety to plant. The fact sheet PSS-2600, Selecting an Appropriate Bermudagrass Variety for Pastures, discusses traits important for choosing the most appropriate variety for a specific location.

The purpose of this document is to compare the genetic differences in forage yield potential among commercially available sprigged and seeded Bermudagrass varieties. This information can give producers an indication of forage production potential of several varieties. The forage yields reported here are the results of research comparing varietal genetic potential, management factors such as planting date, seeding rate, soil fertility and environmental factors, such as temperature, rainfall amount and distribution. These environmental and management factors vary greatly from location to location and among Oklahoma’s geographic regions. A total of 13 varieties are being tested in four different locations across Oklahoma (Figure 1). Fact sheet PSS-2600 contains brief descriptions of the agronomic characteristics of all tested varieties. 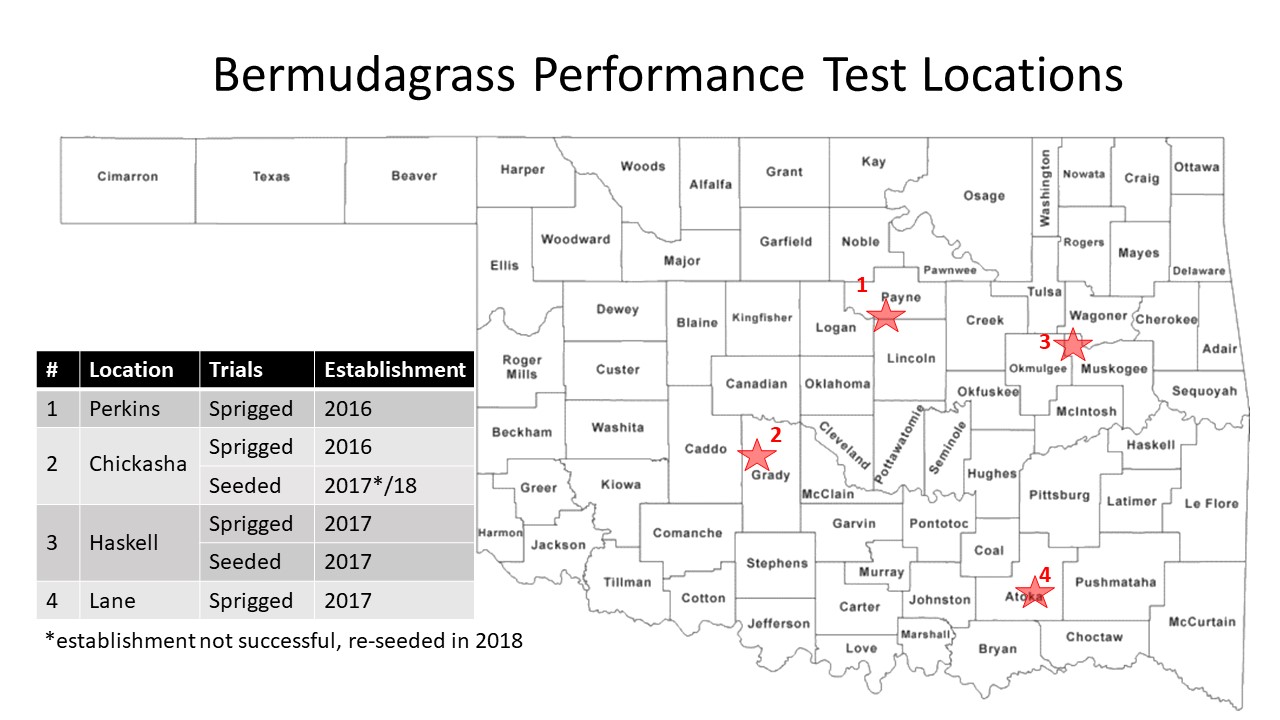 In 2016 and 2017, Bermudagrass variety performance tests were established at four locations. Forage yields have been, and will be, measured in the same plots for four successive years. The experimental design was a randomized complete block with four replications. Plots were established in a conventionally tilled, firm seedbed and lime, phosphate (P) and potash (K) were applied, according to soil test recommendations (Table 1), and incorporated 3 inches deep during seedbed preparation. Sprigged plots were planted at four sprigs per 10 square feet, which is similar to a rate of 40 to 50 bushels of sprigs per acre. Seeded plots were seeded at 15 pounds of pure live seed per acre, which corresponds to the highest recommended seeding rate among participating companies. When stolons were 3 inches long, 30 pounds of actual nitrogen per acre (65 pounds of urea per acre) was applied. Each year, after Bermudagrass broke dormancy and produced the first green leaves (at green-up), nitrogen was broadcast at a rate of 200 pounds per acre (440 pounds of urea per acre).

Plots were hand-weeded during the establishment phase to avoid potential herbicide injury. After establishment, preemergent (pendimethalin) and postemergent (glyphosate) were applied in late winter or early spring (before green-up), respectively. Early season weeds at green-up in early May were controlled by mowing at 2 to 3 inches. In-season weeds were controlled by hand-weeding and/or selective postemergent herbicides such as 2,4-D and dicamba.

Forage was measured by hand clipping 1 inch above the soil surface in three 1-square-foot quadrats per plot. Plots were mowed and cleaned to simulate hay harvest immediately after sample collection. Samples were oven-dried until all samples were completely dry and total dry forage yield was assessed. Forage sampling occurred every six weeks, which generally resulted in three or four cuttings per year, depending on temperature and rainfall amount and distribution through the season.

On July 15, 2016, Bermudagrass varieties were sprigged in Perkins. This was later than optimal. To alleviate the potential of sprig death from drought, a total of 3 inches of moisture through rainfall, supplemental irrigation or a combination of both was applied weekly during the first eight weeks after sprigging (mid-July to late August). In the first year of forage production, yields ranged from 4.08 to 7.44 tons per acre. No pests or environmental challenges were observed in 2017. In 2018, Bermudagrass dry yields ranged from 4.29 to 4.97 tons per acre. The reduced forage of 2018, compared to 2017, was primarily due to smaller second and third cuttings. Herbicides failed to control weeds during early stages. Mare’s tail (Conyza Canadensis L.) infestation reduced the second cutting forage yields. Consequently, field plots were hand weeded at four weeks of regrowth. Low rainfall during the first four weeks of regrowth reduced the third cutting yields.

On July 18, 2016, sprigged Bermudagrass varieties were planted in Chickasha. Weekly irrigation of 1 to 3 inches, combined with 5 inches of summer rainfall during the first seven weeks after sprigging (early July to late August) allowed successful establishment. Yields during the first production year ranged from 5.00 to 7.69 tons per acre. Absence of rainfall from late June to late July decreased the second cutting production in 2017. Armyworm (Pseudaletia unipuncta) infestation occurred in late August, but effective control was achieved by applying Lambda-cyhalothrin. The second-year production yields ranged from 6.57 to 9.79 tons per acre. Lack of rainfall from late June to early August decreased the third cutting production.

On May 18, 2017, sprigged Bermudagrass performance trials were established in Haskell. The test received 13 inches of rainfall during the first eight weeks after planting, which aided in successful establishment. Low weed pressure and no insects or diseases occurred 2018. This, combined with a well-distributed rainfall throughout the growing season, allowed good forage production. The first-year production ranged from 4.95 to 7.59 tons per acre.

On May 20, 2017, a sprigged Bermudagrass performance test was established in Lane. In the establishment year, the test received 12 inches of rainfall during the first seven weeks after sprigging. The first-year production ranged from 5.24 to 7.31 tons per acre in 2018. No pests or abnormal conditions were observed in 2018, which ensured a good production year.

On June 28, 2017, a seeded Bermudagrass performance test was planted in Chickasha. In Oklahoma, seeding Bermudagrass is recommended from May to Mid-June. Consequently, seedling emergence occurred too late in the season and the test was not successfully established. Soil crusting from a short duration, high impact, 2-inch rainfall event 10 days after seeding prevented seedling emergence until late July, when soil cracks allowed seedling emergence. Bermudagrass seemed well established in late September, however, the stand did not regrow in 2018. A new test was established May 6, 2018 at Chickasha. This early planting was key for a successful establishment because it allowed fast seedling development at milder temperatures and a longer growing period for developing rhizomes and roots. Seedling emergence occurred after one week and a total of 4 inches of rain in the first five days. Bermudagrass stands achieved 90 to 100 percent groundcover in the next eight to nine weeks, after a total precipitation of 8 inches. Bermudagrass green-up was observed in all plots May 2019. Yields from this test will be reported in the future.

On May 18, 2017, seeded Bermudagrass performance tests were established in Haskell. Three inches of rainfall in the first two weeks allowed good seedling emergence. This was followed by a total of 11 inches of rain in the next eight weeks, resulting in well-developed rhizomes and roots before dormancy, which are essential for winter survival.

Low weed pressure and no insects or diseases were observed in 2018. This, combined with well-distributed rainfall throughout the growing season, allowed good forage. The first-year production ranged from 4.39 to 6.99 tons per acre. All varieties survived the previous winter; however, Bermudagrass stands were uneven across plots for all seeded varieties.

Differences among varieties across locations were observed; however, it is too early to conclude which varieties are more adapted to each location. Bermudagrass takes three to four years to establish and to show its final yield potential. These Bermudagrass variety performance tests will be continued to assist producers in making future variety decisions. 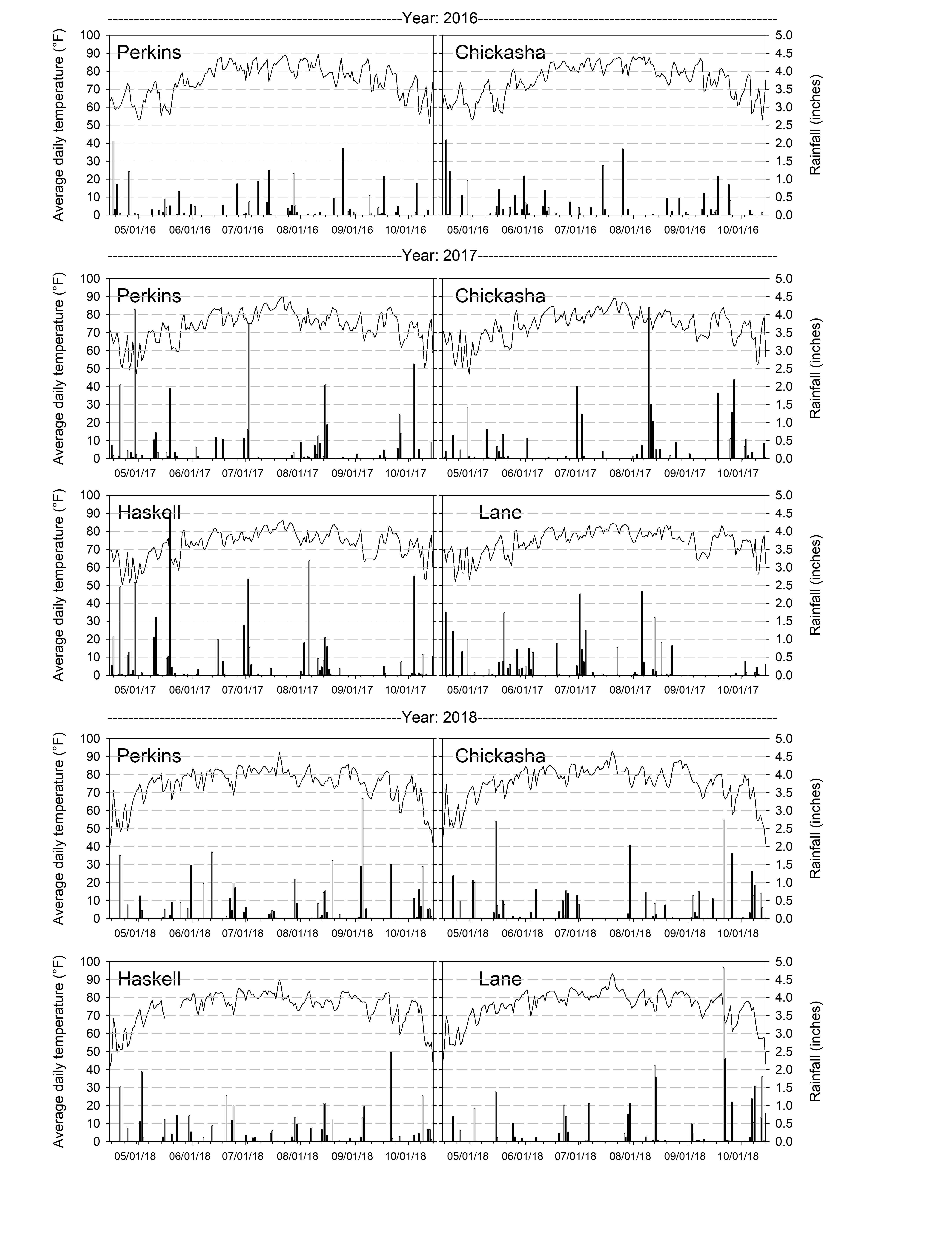 The differences and adaptability of Bermudagrass varieties in Oklahoma.

Consider the most important soil and weather factors when deciding which Bermudagrass variety to establish.

Learn how to identify, control and prevent the highly invasive bermudagrass pest, sandburs.