Evaluating the Economic Impact of Telemedicine in a Rural Community

“Telemedicine” is defined as using electronic communications to exchange medical information from one site to another.  By taking advantage of this technology, rural residents can greatly increase the spectrum of healthcare services available to them. Studies have shown that the presence of a telemedicine center can increase the perception of healthcare in rural communities (Nesbitt, 2005). However, the benefits of such a center to rural individuals and communities include much more than simply improved health services. The local economy is also enhanced via the addition of telemedicine capability.  This fact sheet provides a methodology that allows rural areas to estimate the economic impact of telemedicine on their community.

Forms and Benefits of Telemedicine

Telemedicine generally involves the interaction of a patient and a local provider in one location (usually rural) and some type of physician in another location (usually urban).  Telemedicine services are comprised of two basic types of technology.  One, called store-and-forward, digitally captures and stores the image, and then forwards it to a remotely-located physician for analysis and diagnosis. The most common use of this technology is in teleradiology (Figure 1), where digital X-rays are read by radiologists in remote locations.  The X-rays are often created by using a specialized scanner known as a digitizer.

The other common technology is known as real-time, meaning that the patient and physician are interacting at the same time.  This two-way interactive television (IATV) method uses screens set up in different locations connected with a high-speed telecommunications line. This creates the impression of a face-to-face interaction between provider and patient.  A third party assists in these real-time visits to operate the equipment, and make notes of any special instructions or prescriptions given by the physician. One of the most common telemedicine procedures using real-time technology is telepsychiatry (Figure 2). Rural hospitals often use a combination of store-and-forward and real-time technologies to optimize the care they provide.

Telemedicine can deliver many different types of services.  These include (but are not limited to):  radiology, psychiatry, dermatology, home health, pathology, internal medicine, cardiology, pediatrics, obstetrics and gynecology, oncology and neurology.  Two of the most common applications of telemedicine in rural areas are teleradiology and telepsychiatry.

Rural hospitals can potentially benefit from telemedicine by increasing the number of services, offering a quicker turnaround time for tests and consultations, and having a means to educate and inform primary care physicians and other providers.  This study identifies (and quantifies) four distinct benefits of telemedicine use in a rural community:

Discussion of these benefits follows.

The methodology outlined below seeks to estimate the community-level economic impact that telemedicine has in a rural area.  Data to support the study come from Oklahoma State University’s Telemedicine Network.  Figure 3 shows the 22 current network sites and the 13 additional sites that are interested in becoming part of the network in the future.

The methodology was developed from data provided by five rural hospitals that are part of this network.  Table 1 gives an overview of sample communities and telemedicine activity. 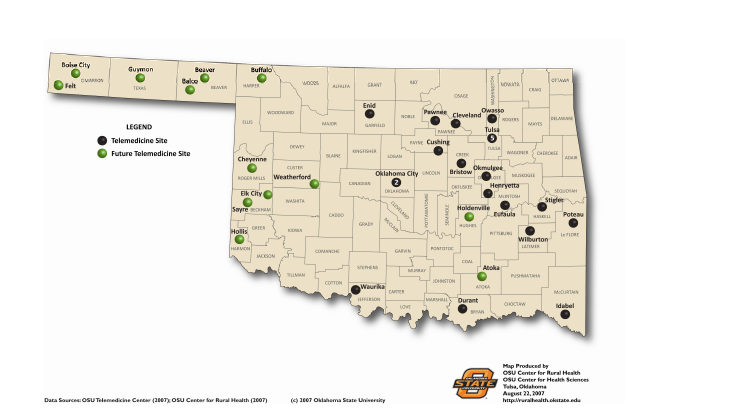 Hospital cost savings from outsourcing specialty physician services:  Because specialists such as radiologists and psychiatrists command large salaries that rural hospitals struggle to pay, outsourcing these procedures via telemedicine offers a cost-saving alternative.  Table 2 illustrates the potential annual savings by comparing specialists’ salaries to payments for telemedicine encounters. The rates per encounter represent averages paid by the hospitals in the study, as actual rates will vary significantly by hospital.

Note:  FTE stands for full-time equivalent.  0.4 FTE is equal to 2 days per week.

Patient savings on travel time and expenses:  A large benefit of telemedicine is its ability to enhance the turnaround time for results to reach the patients.  Because travel time and expenses are reduced, services are provided quicker and the results are obtained in a more timely fashion. When considering the community as a whole, transportation savings can amount to a significant quantity of money. Table 3 presents travel cost savings estimates for four teleradiology sites and two telepsychiatry sites in Oklahoma. Only five percent of all radiology encounters are used, as historically this percentage has required the immediate assistance allowed by telemedicine.  If these patients had arrived at a facility without telemedicine, they would have been sent on to the nearest location due to the severity of their injury. The other 95 percent would simply get X-rays and wait for the radiologist to come and read them later in the week, and therefore do not qualify for savings in this category. Since the rural hospitals we met with did not have a rotating psychiatrist, 100 percent of telepsychiatry visits can be used to estimate the transportation cost savings from telemedicine.

Patient savings from fewer missed hours of work:  When rural patients travel for health services, they are absent from work. Potentially, work income can be lost during that time. The methodology for estimating missed work income is similar to that for travel cost savings, but instead of driving distance and cost per mile, total driving time and average hourly wages are used. Table 4 presents the nearest substitute location and distance from that site in miles, and estimates the total savings based on these factors and an hourly wage.

More dollars are captured in local economy from using local health services:  Eilrich, Doeksen, and St. Clair (2007) indicate that the location of a patient’s initial screening primarily determines where they have their laboratory or pharmacy work performed.  Because a telemedicine patient does not leave the area to receive their original diagnosis, resulting follow-up work is much more likely to end up at the local pharmacy or lab.  Table 5 presents typical follow-up procedures and medication prescriptions resulting from psychiatric and radiology visits based on discussions with site physicians. Along with listing typical follow-up measures, physicians estimated the percentage of patients requiring these follow-ups. Low- and high-cost estimates for the follow-up procedures and prescriptions were gathered based on publicly available price lists.  Also note that this information has been annualized by assuming a number of yearly encounters (84 psychiatric visits and 2,400 teleradiology reads), which will vary by hospital. One inherent assumption is that no additional work would have been performed locally in the absence of telemedicine.

The impacts discussed above will vary based on the community where telemedicine is employed. In particular, the number of encounters, distance to the nearest substitute location, and average wage rate will be different. Each category is applied to five distinct rural hospitals in Table 6, which summarizes the impacts discussed above and illustrates the importance of community differences. Pharmacy and lab totals used here are the low-end estimates, thus actual impacts could be significantly larger than those shown in Table 6.

In general, each community recognizes at least $145,000 per year in savings or other economic opportunities generated by adopting telemedicine.  Clearly, the addition of telemedicine services to a rural hospital not only improves the medical services offered, but boosts the local economy as well.

Table 7 summarizes some of the major equipment costs of teleradiology or telepsychiatry at the hospital level.

Reimbursement for telemedicine remains an issue for both public (Medicare/Medicaid) and private payers.  There is some good news for hospitals, as the Consolidated Appropriations Act of 2001 included language that permits Medicare to reimburse teleradiology in rural “originating sites” (including hospitals). Additionally, Medicare provides reimbursement for remote face-to-face, patient interactive services such as telepsychiatry as of 2006.  Medicaid, however, is a different story – only 27 states have enacted provisions that allow for reimbursement of telemedicine through the Medicaid program, and only 12 of those reimburse for psychiatric programs. Although private payer programs are slowly increasing in number, Oklahoma is one of five current states with laws in place mandating reimbursement for telemedicine procedures.

Acceptance by Medical Community and Patients

Studies conducted by Gustke et al. (2000) and Nesbitt et al. (2005) indicate a growing acceptance among the users of telemedicine and also found that telemedicine could be used as a tool for recruitment and retention of health professionals in rural areas.

Telemedicine can serve rural communities in a number of ways.  These include:

The actual economic impact of telemedicine for a particular rural area will vary greatly depending on the type and quantity of the encounters, the distance to alternative providers, average county incomes and the percentages of patients using the services.  The methodology outlined in this fact sheet can provide an estimate of how important an existing telemedicine center is to a rural community, or can be used as a tool to determine whether or not a hospital should implement a telemedicine system in their community.

Whitacre, B., Hartman, P., Boggs, S.  2007.  “The Economic Impact of Telemedicine Capability in a Rural Hospital.”  Study developed for the National Center for Rural Health Works.  Available at http://www.ruralhealthworks.org/dl_economic.html.  December 2007.