Equine Infectious Anemia (EIA) is a contagious viral disease that affects horses worldwide. EIA is a disease of all equidae. Other livestock are not known to be affected by this virus. EIA is also known as swamp fever because of the higher incidence of this disease in the Gulf Coast states. The highest number of cases occurs in warm climates because of the prevalence of blood sucking insects that are the primary transmitters of this disease. Cases of EIA occur all over the nation, but 80 percent of the cases are in the nine southeastern states. Once infected, horses will remain lifelong carriers of the virus. There is no cure for EIA. Although many infected horses show no symptoms, they remain contagious for life, endangering the health of other horses. For this reason, the United States Department of Agriculture and state animal health regulatory agencies require euthanasia or strict lifelong quarantine for horses testing positive for EIAV. At this time, the State of Oklahoma requires all equidae (horses, ponies, mules, and donkeys) “entering the state for any purpose other than consignment to a veterinarian’s clinic or an approved slaughter facility must be accompanied by a record of a negative official test for EIA, commonly known as the Coggins Test, conducted within the previous 12 months.”

There are acute, chronic and inapparent forms of this disease. In the acute form, horses may have a high fever, depression, loss of appetite, small areas of hemorrhages on the mucous membranes, swelling of the legs (stocking up) and edema (collection of fluid) along the ventral abdomen. The acute form of this disease usually occurs within seven to 30 days post exposure to the virus. In the chronic form of the disease, horses may suffer recurring signs of intermittent fever, depression, lack of appetite with weight loss, anemia and weak-ness, often seen as incoordination of the hind quarters. Some horses become infected with EIA without detectable clinical signs of the disease and are inapparent carriers of this virus. The majority of clinical signs associated with EIA infection are related to the reaction of the horse’s immune system to the virus. The severity and frequency of these recurring episodes decrease with time. Abortion or failure to conceive also may occur in EIA infected mares. Horses generally recover from either the acute or chronic form of this clinical disease, but will remain lifelong carriers of the virus.

EIA virus is found in the blood of all infected horses, even the inapparent carriers. The virus is transmitted to noninfected horses primarily by blood sucking insects. Insects such as horseflies and deer flies are the most significant transmitters, but others such as mosquitoes and gnats can spread the virus. When an insect’s blood meal is interrupted, the possibility of transmitting the EIA virus is augmented. The horsefly with its painful bite results in frequent interruption of feeding episodes. The fly can carry blood from an infected horse to the next horse it feeds on, thus transmitting the disease. Horses in the acute phase of the disease are more infectious because of the high level of virus circulating in their blood. Other methods of transmission include the use of virus-contaminated instruments such as needles, syringes and dental and tattooing equipment. In EIA infected pregnant mares, approximately 10 percent of their foals are born infected with the virus, apparently due to placental transmission of the virus. Transmission of the virus also may occur through natural breeding of mares and stallions, but is not a primary method.

The laboratory tests used to diagnose EIA are the Coggins or AGID test and the ELISA test. These tests are accurate in detecting EIA infected horses. EIA was difficult to diagnose and identify until 1970, when the agar-gel immunodiffusion test, commonly known as the Coggins test, was developed. More recently, enzyme-linked immunosorbent assays (ELISA tests) reduced the time for a lab result from at least 24 hours to less than one hour. Accurate tests allow us to identify and remove positive reactors from herds and effectively block the spread of EIA among tested populations. When laboratory tests are performed before there has been sufficient time for antibody production against the virus, which is during the initial 45-day exposure period, false negatives can occur. False positives occur when foals with circulating colostral antibodies from suckling EIA infected mares are tested. These colostral antibodies are no longer present at approximately six to nine months of age. In Oklahoma, blood samples used for the detection of EIA must be drawn and submitted to an approved lab by a licensed, accredited veterinarian. Confirmed EIA positive horses are placed under quarantine, isolated and branded on the left neck or shoulder with a “73A.” Horses are branded using a hot iron or freeze brand at least two inches high, and within 30 days of the date the laboratory completed the test, unless the equidae is euthanized. These positive horses must be euthanized, shipped for slaughter, or kept in isolation at least 200 yards from all negative equidae for the remainder of life. According to the Department of Agriculture rules: “The quarantine restricts not only the infected equidae but all other equidae on the premise and all equidae epidemiologically determined to have been exposed to an EIA positive animal. All exposed, contact or adjacent herds must be tested not less than 60 days or more than 120 days following the identification and removal of the last positive animal.”

To control the spread of EIA in Oklahoma, positive horses must be detected and removed from the horse population. To effectively detect infected horses, especially inapparent carriers, will require more testing. Owners can take the following preventative measures to reduce the chances their horse will contract EIA:

The Department of Agriculture has two other EIA requirements that affect horse owners. A record of a negative official EIA test conducted within the previous 12 months must accompany all equidae entering equine exhibitions. Equine exhibitions are defined as, but not limited to, fairs, livestock shows, breed associations, rodeos, racetracks, or other events where equidae congregate. A current EIA test also will be required at the time a horse changes ownership (foals less than six months of age, accompanied by and nursing a negative tested mare, are exempted from the testing requirement). The rule states “All equidae which are sold, bartered, traded or offered for sale within Oklahoma, must be accompanied by a record of a negative official test for EIA conducted at an approved laboratory within the previous 12 months.”

At this time, there is no effective treatment for EIA. Infected horses are lifelong carriers of this virus. There is currently no vaccine approved in North America to protect a horse against EIA. Investigators are working toward the development of a vaccine. The problem with vaccine development is that it not only needs to protect the animals against EIA, but investigators have to be able to distinguish between an EIA titer caused by disease and a titer caused by a vaccine. An effective vaccine would help eradicate the threat of EIA for the horse population. 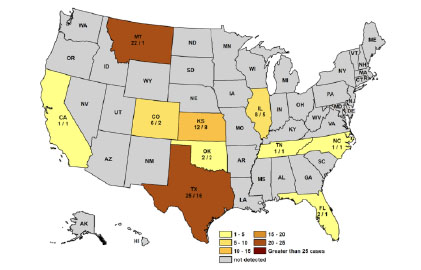 A guide on pre-and-post weaning foals and recommendations for proper care and management through weaning season.

How to understand the physiology, estrous period and recordkeeping practices for proper management of a mare’s reproductive cycle.