Physician offices across the nation are currently assessing the practicality of adopting Electronic Medical Records in their practices. Electronic Medical Records (EMRs) are computer-based patient records located in a single database at a given practice.  EMRs allow for electronic note-taking, prescription and test ordering, and viewing lab and x-rays.  (For more information see Oklahoma State University  CR-1013, EMRs: What are They?)

EMRs became a popular topic in the healthcare industry during the 1990s.  However, the use of EMRs was not quick to catch on in some practices.  Many medical professionals were hesitant to adopt EMRs due to high start-up costs, high initial physician time costs, and technology requirements (Miller and Sim 2004).  Recently, the number of physicians adopting EMRs has significantly increased, in part due to government incentive programs that help offset the cost of EMR equipment.  This same legislation set penalties for non-adoption scheduled to begin in 2015. The end goal of EMR adoption is to improve health outcomes, improve the quality of health care service, and reduce health costs as health care entities (primary care offices, hospitals, pharmacies, etc.) begin to share health data.  As the health care world moves towards interoperability among EMRs, it is useful to assess how adoption is proceeding among an integral component of the health care chain – physician offices.

This Fact Sheet uses physician-level data from 2009 through 2011 to observe EMR adoption rates in physician offices across Oklahoma.  The data comes from annual telephone surveys of roughly 12,000 physicians in Oklahoma and contains observations from all 77 Oklahoma counties.  The surveys were conducted by SK&A, a private company specializing in health-related data.

Where is Adoption Happening?

Oklahoma physicians have seen steady growth in EMR adoption between 2009 and 2011 (Figure 1).  In 2009, 35 percent of Oklahoma physicians had adopted EMRs.  By 2011, that number had increased to 54 percent, which is the same as the 2011 national average (Jamoom et al. 2012).  The gap between adoption in metro and non-metro counties has remained small during the three-year study period.  According to the 2011 data, adoption continues to be greater in Oklahoma’s metro counties by less than one percentage point.  This difference is not statistically significant.

The aggregate metro and non-metro rates, however, mask significant variation in adoption rates by county (Figure 2).  Note that the metropolitan counties in Figure 2 are symbolized by diagonal lines through the county, and that the total number of observations, regardless of EMR adoption, is represented in parentheses underneath the county name.  Impressively, several non-metro counties have 100 percent adoption from physicians within their borders – although other counties have 0 percent adoption.  Small numbers of observations in these counties can significantly impact these results.  The majority of Oklahoma counties (both metro and non-metro) have adoption rates between 40 percent and 60 percent.  The adoption rates of local physicians will be particularly important for nearby hospitals, pharmacies, and other health care providers as U.S. legislation begins to push for interoperability between these entities. 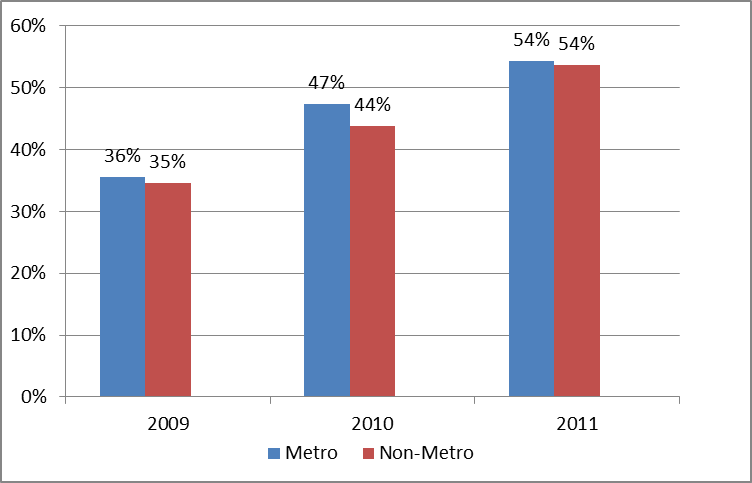 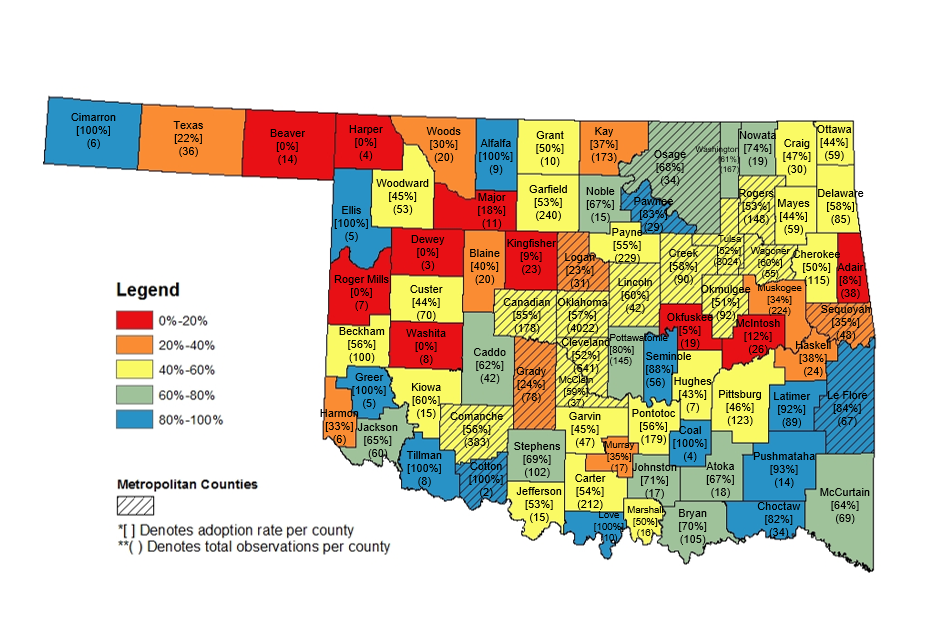 However, other characteristics such as physician age, specialty, and number of physicians per office can also play a role. Research has shown that younger physicians, those in primary care, and physicians in multi-practice offices are more likely to adopt (Decker et al. 2012). The data indicates that the largest share of Oklahoma physicians is between 50 and 60 years of age (although roughly half of all survey participants chose not to share their age). Figure 3 demonstrates, however, that higher shares of younger adopters are consistently found in metropolitan counties. Nearly half of all adopters (48 percent) in metropolitan areas are less than 50 years old, compared to only 40 percent of non-metropolitan adopters. This trend is likely highly correlated with the larger share of physicians age 55 and older in rural areas (OSU Center for Rural Health, 2013). The median age for all surveyed physicians in metropolitan Oklahoma (52) is lower than that for all non-metropolitan physicians in the state (55). This trend holds for those that have chosen to adopt EMRs, with median ages of 50 (metro) versus 52 (non-metro). 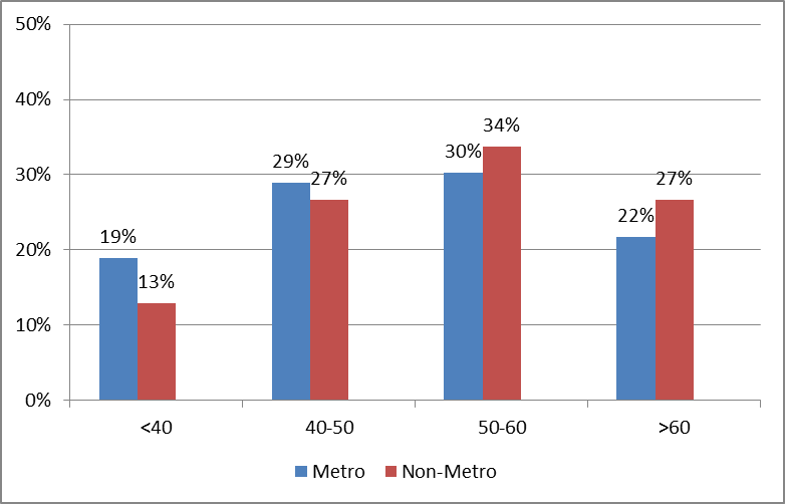 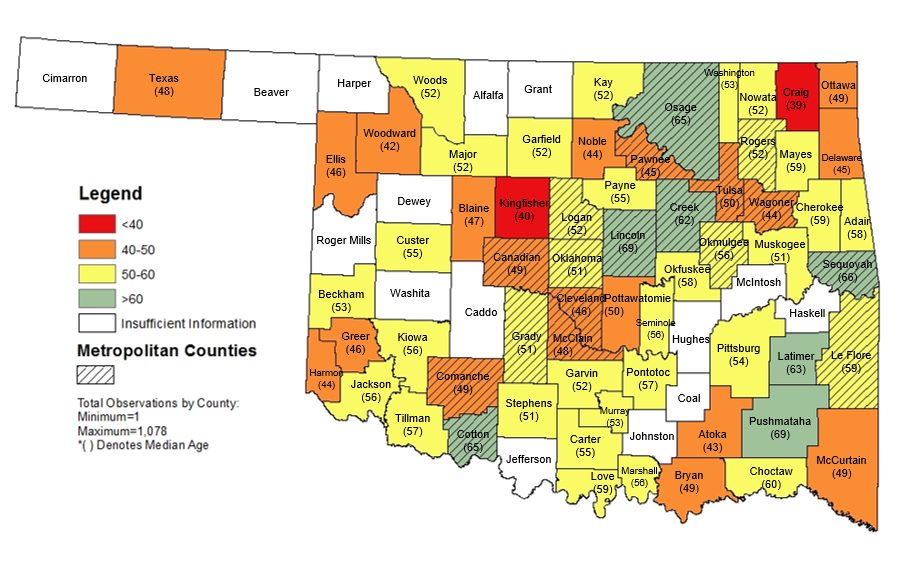 When selecting an EMR vendor, many similarities arise between metro and non-metro counties.  Of the physicians who reported the EMR vendor selected, Allscripts was the most common selection for both metro and non-metro counties.  Epic Systems Corporation was also commonly reported in both areas.  The table below displays the top three EMR vendors selected by metro and non-metro physicians. For each of the vendors displayed, a high percentage of survey respondents indicated that they were using the EMR to capture data (more than 90 percent), e-prescribe (85 to 90 percent), and view labs (80 to 85 percent).

A primary reason for the substantial increase in adoption rates observed between 2009 and 2011 could be the federally funded incentive program reaching its expiration date.  The 2009 American Recovery and Reinvestment Act (ARRA) provided funding to health care facilities to encourage EMR adoption.  The funding, known as reimbursement incentive payments, is offered separately by Medicare and Medicaid to individual physicians.  (For more information see Oklahoma State University CR-1023, Electronic Health Records Incentive Program: the Payment Clock is Ticking!)  Each incentive program has different start dates and sundown dates.  Eligible professionals must also demonstrate “Meaningful Use” prior to 2015 or face a Medicare reimbursement reduction (CMS, 2013).  The most recent  (2011) data suggest that of the non-adopting physicians in Oklahoma (which make up 46 percent of all physicians in the state), only a minority (43 percent) reported being aware of the incentive program.  Thus, improving awareness of the impending Medicare penalties may be an important issue to address for Oklahoma physicians that have not already adopted EMRs.

“Meaningful Use” is a set of three stages measuring how efficiently a physician utilizes EMRs.

As Oklahoma adoption rates continue to rise, there are still many physicians (46 percent as of 2011) who choose not to adopt.  Their rationale for not doing so varies dramatically.  Aside from “no single main factor,” the cost of EMRs was the top reason for physicians choosing not to adopt EMRs.  While the majority of physicians not using EMRs were located in metro counties, rates of non-adoption varied dramatically across the state (Figure 1).

The overall adoption rate of EMRs for physicians in Oklahoma is continuing to increase and the existing metro – non-metro gap is relatively small.  The next steps to watch are Stage 2 and 3 of “Meaningful Use” as hospitals and physician offices move forward with EMR adoption.  Interoperability will begin in Stage 2 to provide standardization for EMR users.  Adoption of EMRs by other health care entities (home health and hospice care, pharmacies, etc.) will become more important as interoperability is implemented in hospitals and physician offices.  EMR adoption by other health entities is varied.  As of 2007, 44 percent of home health and hospice care agencies had adopted electronic records (Bercovitz et al., 2013) while recent data suggests that around 80 percent of critical access hospitals have received EMR incentive payments (HHS, 2013).  Assessing the impacts of EMR adoption (and non-adoption) will also be important as the technology becomes more commonplace.