The use of natural enemies such as spiders, predatory insects, and parasitoids to control insect pests is fairly well known among plant producers and home gardeners. One category of natural enemies that is less known, however, is the entomopathogens, or “insect pathogens.”  This group consists of microbial disease agents such as bacteria, viruses, fungi, and entomopathogenic nematodes (EPN) that make insects sick and ultimately kill them. Some of these disease agents are currently available as commercial insecticides, however, many occur naturally in the soil and simply require conservation or augmentation to provide control of soil-dwelling insect pests.

Entomopathogenic nematodes are considered insect pathogens rather than insect parasites because symbiotic bacteria that exist within the gut of these nematodes are released when the nematode enters an insect host and are ultimately responsible for the death of the insect. Entomopathogenic nematodes purchased commercially are likely to be non-native strains that may displace native EPN.  By conserving and/or augmenting the native EPN species present in your system (e.g., garden, small or large production facility, or animal pasture), you can promote pest suppression of soil-dwelling insect pests with minimal disruption to the ecological balance of the soil community.

Entomopathogenic nematodes are widely distributed throughout the world and have been isolated from many types of natural and managed habitats in a wide variety of soils. They are naturally occurring pathogens and specific to insects, and are not harmful to the environment, humans, or other vertebrates. Because EPN specifically target soil-dwelling insects and are not harmful to other animals, they are exempt from registration with the Environmental Protection Agency as a commercial insecticide.

Entomopathogenic nematodes are small roundworms, barely visible with the naked eye.  The only free-living form of these nematodes is the infective juvenile (IJ), which requires an arthropod host to complete its life cycle.  These nematodes function as a naturally occurring biological control agent of arthropods that live all or part of their lives in the soil. Two families of EPN, Steinernematidae and Heterorhabditidae, each contain many different species that exist commonly in Oklahoma soils. Infective juveniles from different species exhibit different host-finding behaviors. Some hunt for an insect host on the surface, while others burrow into the soil looking for an arthropod host.  Because of variations in host-seeking behavior, it is important to use the correct species of EPN against the specific type of insect pest targeted for control. Table 1 specifies which EPN species are most effective against different types of insect pests.

Once an arthropod host is located, the IJ enters the host’s body through natural openings, such as the mouth, anus, or spiracles (pores for gas exchange). Once inside the insect host, EPN release bacteria that are housed within their gut; the species of bacteria is unique to the family of nematodes and not known to exist anywhere but in the gut of these nematodes. These bacteria ultimately kill the host, usually within 48 hours, and preserve it for the duration of the nematode’s life cycle. Completion of the life cycle may take 5 to 10 days for Steinernematidae species and 10 to 15 days for Heterorhabditidae species (Figure 1).  Nematodes develop through two to three generations inside the dead insect before emerging as IJ’s from the insect cadaver (Figure 2). The general size of the emerging IJ’s can be examined under a microscope to aid in identification of EPN, as some species are distinctly large or small (Table 2).  Tens of thousands of new IJ’s may be released from one infected host. 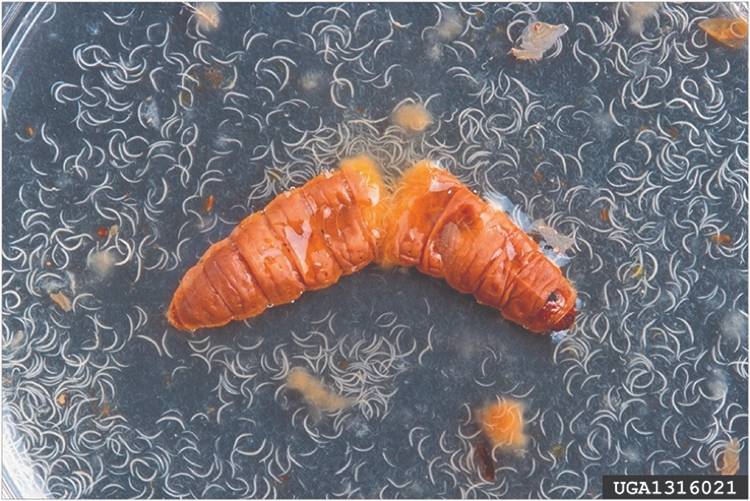 The symbiotic bacteria, Xenorhabdus spp. (in Steinernematidae) and Photorhabdus spp. (in Heterorhabditidae), are virulent against a broad range of arthropod hosts.  Once released by the nematode, the bacteria kill the host insect via bacterial infection and release a wide variety of compounds that act to preserve the insect cadaver in the soil.  The bacteria also provide a nutrient source for the developing nematodes.  All nematode-infected insect cadavers will have a distinct consistency (firm and rubbery) and stay intact for more than a week, while the nematodes complete their life cycle. Insects that die from something other than EPN infection will typically rot and disintegrate within a day or two of death.

Insects infected with EPN typically exhibit symptoms that are specific to a particular nematode species. For example, cadavers of the greater wax moth larva (waxworms), Galleria mellonella, infected with Heterorhabditis spp. of nematodes will turn a purplish color due to metabolites produced by their symbiotic Photorhabdus bacteria.  Waxworms infected with Steinernema carpocapsae often exhibit a beige color, while those infected with Steinernema glaseri or Steinernema feltiae will turn dark brown (Figure 3).  Again, the color change is due to the symbiotic bacteria associated with each nematode.  Table 2 lists more examples of the symptomatic appearance of insect cadavers. 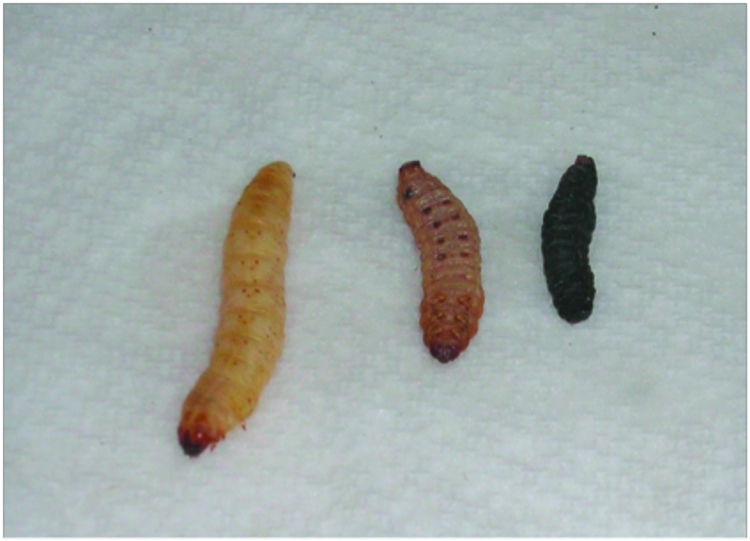 Entomopathogenic nematodes are sensitive to a variety of stressors.  Application of nematicides, some broad-spectrum insecticides, and intense tillage are examples of management practices that can negatively impact beneficial nematodes.  Thus, reducing these disturbances can help conserve EPN as well as arthropod predators and parasites. Another conservation strategy is to use soils rich in organic matter, since they tend to be less compacted and have more pore spaces between soil particles; EPN tend to congregate within these pore spaces on or near the soil surface.  Pore spaces may also form around plant roots, worm tunnels, or underneath mulch. Research has shown IJ’s to be tolerant of short exposures (2 to 6 hours) of most agrochemicals including herbicides, fungicides, acaricides, and insecticides in solution.  Applying these pesticides with adequate amounts of water will promote their survivability.

How to Detect Entomopathogenic Nematodes

The use of a living organism to survey for a biological agent is termed “bioassay.” Waxworms are caterpillars of the greater wax moth and are often used to detect the presence of soil pathogens at a given site. Waxworms in their natural state are parasites of honey bee hives, feeding on the wax and normally never coming in contact with the soil. Thus, waxworms have no natural immunity to soil pathogens and will most likely become infected when they come in contact with EPN. Because symptoms of EPN infection include a color change, waxworm caterpillars are ideal organisms for bioassays. Waxworms may be purchased online through a variety of different vendors (simply perform an internet search for waxworms or Galleria mellonella and a variety of suppliers should be displayed). Occasionally, they may be purchased at bait shops or pet stores. Any extra waxworms not used for bioassay purposes should be placed in the freezer overnight (to ensure that they are dead) and then discarded.

Entomopathogenic nematodes occur in soils worldwide and it is very easy to survey any area for their presence. . Species commonly collected in Oklahoma soils are listed in Table 3. Rather than examining soil samples for IJ’s, which are very tiny, the soil is baited with a living organism that will attract IJ’s from the soil and then exhibit symptoms indicating infection.

Data provided by K. Risser, Graduate Research Assistant in the Dept. of Entomology and Plant Pathology at OSU.

1. Place infected cadavers on a moist piece of paper towel in a covered dish (Figures 4 and 5).

Figure 4. Infected waxworm cadaver paced on a moist piece of paper towel (or filter paper) in a covered dish. The top of the dish is labeled with date and location of the soil sample that yielded the infected cadaver. 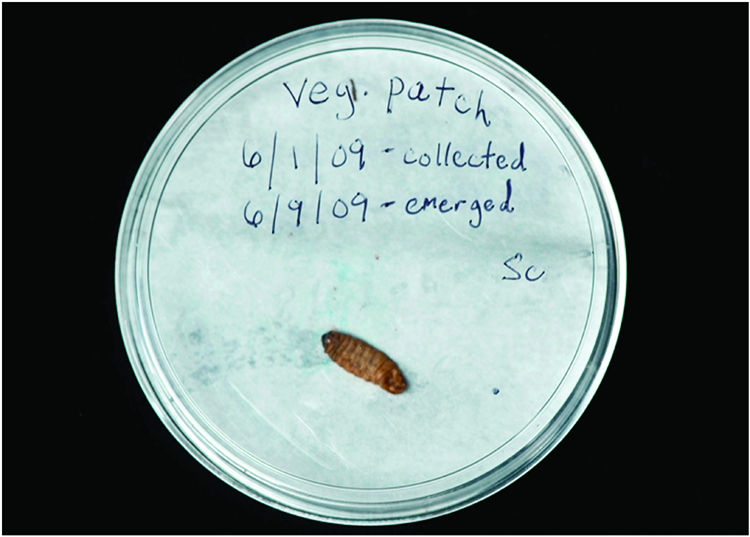 2. Place the dish loosely inside a plastic bag and seal it most of the way to hold in moisture, but not so much that air cannot get into the bag (Figure 6). 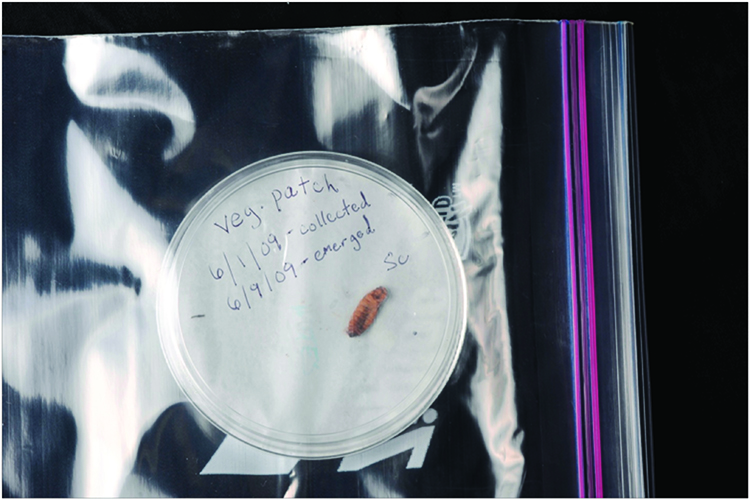 3. Place the bagged dish in a dark place at room temperature and check it daily.

4. When IJ’s begin to emerge, place the bottom petri dish into a larger “catch” dish that has a little water in it (Figure 7). For best results, very carefully remove the damp piece of paper towel containing the cadaver, flip the bottom dish upside down in the larger catch dish, and then place the piece of paper towel on the bottom/exposed surface of the flipped petri dish. Doing so will allow emerging infective juveniles to move directly into the water. 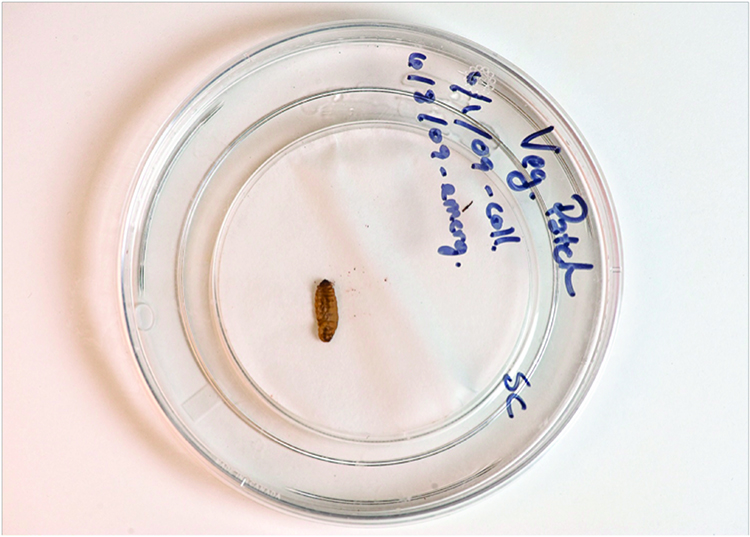 Figure 7. The bottom portion of the small covered dish has been inverted, with the moist piece of paper towel placed on the bottom of the dish. This portion of the dish is placed inside a larger covered dish containing a thin layer of water at the bottom. As new infective juveniles emerge from the infected cadaver, they will migrated down the small dish into the layer of water, where they can easily be poured into a storage flask.

5. Nematodes will crawl into the water, where they may be poured off into a flask containing tap water that has been allowed to sit for at least 48 hours. The flask should be stored in the refrigerator with a loosened cap so nematodes have access to oxygen. The flask should not be filled completely,and nematodes should not be too concentrated in the flask (i.e., the water should not appear to be thick and cloudy). Use multiple flasks to accommodate these storage requirements. Be sure to label flasks with the same data on the covered dish from which the nematodes emerged (Figure 8). 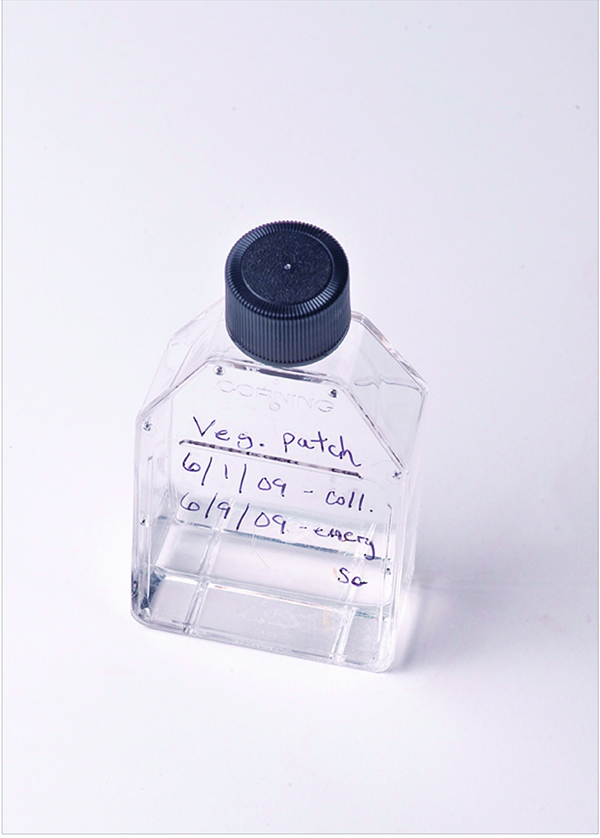 Figure 8. Newly emerged infective juveniles poured off the collecting dish may be stored in a water solution in a flask or bottle.

6. Nematodes in solution may then be used to inoculate healthy waxworms by pouring a couple milliliters of the collected nematode solution over 5 to 10 waxworms which should be placed on a clean damp piece of paper towel in a clean pre-labeled petri dish. Repeat steps 1 to 5.

7. Nematodes in solution may be diluted and applied to the garden in a watering can.

8. Application of nematodes in solution should be done in the evening since EPN are sensitive to desiccation and intense solar radiation. Stored nematodes should be used within three weeks for optimal efficacy.

Information regarding production and pricing of honey. Its goal is to assist beekeepers with honey collecting, budgeting, and marketing.

The most commonly found beneficial insects, their role in pest control and how to use these insects within Oklahoma ecosystems.