Cover crops have been used as a management tool for production agriculture for several decades. However, with the increasing adoption of preemergent and postemergent herbicides in the 1950s and 1960s, this practice greatly decreased. Potential benefits of growing cover crops include improved soil health, increased nutrient cycling, improved water infiltration and increased biological diversity. While many of these aspects have the potential to increase cover crop adoption, it is difficult to place an economic value on these benefits. According to surveys given to southern Great Plains producers, consultants and industry representatives, the two main causes of hesitation among growers for adoption of cover crops were cost of entry and risk of no or a negative return on investment. To offset the cost, there has been a growing interest in using cover crops as a weed management tool to 1) combat challenges with management of herbicide resistant weeds and 2) potentially lower costs associated with in-season herbicide applications.

Cover crops have two methods of aiding in the management of weeds. The primary method is through physical suppression. Allelopathy has been highly documented as an additional means to management problematic weeds, however, it is not universally accepted or understood and should be considered a secondary method. 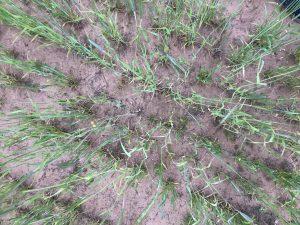 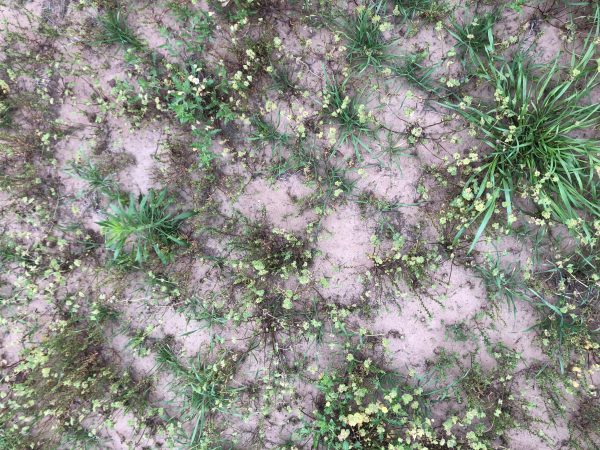 Physical suppression is the primary form of control for most cover crops, it is also the most understood. Physical suppression can be especially effective in controlling weed pressure during fallow periods. This mechanism involves direct competition between the cover crops and the weeds. Competition limits necessary resources, including sunlight, nutrients, water and space that allow the weed to thrive. Typically, this involves the use of a vigorous, quick-growing cover crop that can canopy early in the season and limit the ability for the weeds to establish. Most grass and brassica cover crops are well suited for this type of control since they have rapid vegetative growth. Other cover crops, such as legumes, will typically canopy but will require a much longer period to do so, allowing weeds to establish and limit the success of the cover crop as a weed management tool. Selection and management of cover crops are important because this type of weed management requires relatively high amounts of residue to be competitive with the weeds. Higher planting rates will help (Price et al., 2016). Many believe greater competition could be achieved with multi-species mixes. This may be beneficial in areas where a successful establishment of a certain species is questionable. However, a potential result of planting multiple species is slower canopy cover as any one species may not establish successfully. In Oklahoma, because of known success, small grains would typically be the best option of ensuring a quick and successful canopy in a fall planted cover crop.

Cover crops also can provide weed management benefits into the following cash crop. As covers are terminated or senesce naturally, the residue that remains can continue to provide physical suppression of weeds. The ability and length of control for each cover, however, will vary greatly. Those cover crops that have a narrow C:N ratio (i.e. legumes, brassica or early vegetative grasses) are more easily broken down and will degrade rapidly, which provides minimal value for in-season weed control. Cover crops with more long-term residue, such as small grains, will provide more lasting residue, which can be valuable for in-season weed control. If weed control is the primary driver for planting cover crops, producers should focus on grassy cover crops or mixes where grasses are the predominant species.

Cover crops, through direct competition or physical suppression, can be effective at suppressing annual weeds; however, perennial weeds are more difficult to control and only temporary suppression should be expected.

All plants produce chemicals that may influence the growth and development of other plants. These can be released through the roots as root exudates or released following the breakdown of above- or underground residues. Chemicals can decrease germination or emergence as well as restrict early season growth of seedlings. It has been documented that allelopathic chemicals can continue to decrease root growth following emergence, even decreasing growth and development throughout the season.

Several chemicals can be associated with these allelopathic effects. For example, glucosinolates can be released from the residue of canola and other brassica species and broken down into isothiocyanates, a well-documented allelopathic chemical that is known to decrease plant growth and microbial activity (Darby and Gupta, 2017). For small grain cover crops, such as cereal rye, concentrations of DIBOA (2,4-Dihydroxy-7-methoxy-1,4-benzoxazin-3-one) have been known to accumulate, which has been documented to decrease the germination and emergence of several broadleaf and grassy weeds (Copaja et al., 2006; Tabaglio et al. 2008). It also has been documented that concentrations of these chemicals greatly decreased as the crop matured (Copaja et al., 2006).

The success of using cover crops as a weed management tool varies greatly due to several abiotic and biotic stresses. However, one of the most important factors, as well as one of the easiest components to evaluate, is cover crop species biomass production.

All cover crops species can be used to successfully help manage weeds in season. However, as physical suppression is the primary method of control, species that possess rapid vegetative growth followed by a dense canopy during the period of desired control are favored. Furthermore, control of weeds during the cash crop through physical competition requires a dense vegetative cover following senescence. A trial conducted on a producer’s field in Oklahoma showed that using a small grain cover crop or mixes that contained small grains had 95 percent, 75 percent, and 57 percent fewer weeds compared to the check at one, two and four months following burndown herbicide applications(Figure 2). Brassica species (i.e. radish) will typically produce adequate vegetative biomass and coverage to control weeds; however, these covers frequently will be affected by winter kill resulting in less canopy cover during spring as well as less residue through early periods of the cash crop.

Table 1. Impact of cover crop species on total weed counts at V2-3 and R2 soybean growth stages and soybean yield in Perkins, Oklahoma. Weeds were measured in a 3-square-foot area. Weed counts were conducted immediately prior to herbicide applications at the associated growth stage.

The benefits of cover crops also can be observed in the subsequent soybean yields. When no in season herbicide applications were made, the triticale, wheat, sorghum sudan, cereal blend as well as the rye-based mixes significantly increased yields over the plots without cover crops. When supplemental in season herbicide applications were made, fewer cover crops benefited over the check, only triticale, sorghum sudan and the rye/pea mix. This highlights the potential benefits of using cover crops to aid in weed management and increase cash crop yields.

Cover crops can be an important management tool when added into systems that prioritizes conservation management or soil health. A majority of the documented benefits of cover crops have focused on either crop yields or soil health with little information on the other benefits they can bring to production systems. This is especially true from a financial standpoint, where cost of cover crops can be high compared to the return from solely a crop yield. However, if growers are able to gain additional benefits, such as weed management from cover crops, this could potentially offset the costs associated.

Darby, H., and A. Gupta. 2017. Using high glucosinolate mustards as a cover crop to reduce weed and disease. University of Vermont Extension.

The various insecticides for proper management of insect and mite pests and the instructions for using them in relation to a canola crop.