Boards of directors and management of cooperatives are not evaluating these non-traditional opportunities as they would a new grain bin. In looking at investment opportunities cooperatives should use multiple tools. These tools are:

Net Present Value, while a good method, is complex to calculate and seldom used, therefore only the first two methods will be discussed.

Payback period is the simplest method of evaluating an investment. It measures the length of time an investment takes to pay for itself by dividing the cost of the investment by the annual cash flows generated by the investment. The shorter the payback period the better and while there is no exact benchmark, a general rule of thumb is to invest in opportunities with a payback of less than three years.

A company that is looking for a quick turnaround on their investment will find payback period to be very useful; however it has a major weakness. It ignores the cash flow beyond the payback period. If the investment will only create revenue for three years, it has no long-term value and could eventually become a financial drain.

The internal rate of return looks at the cash flows over the life of the project. Companies should invest in opportunities with rates of return higher than the interest rate paid on capital plus a premium for risk.

The interest expense, or time-value of the money, is a measure of what the company could be earning had they invested elsewhere. Interest expense is important to take into account when considering various alternatives, because a business wants to invest in an opportunity with the highest possible return in relation to other opportunities.

The best way to evaluate an alternative is a combination of payback period and internal rate of return, but how do cooperatives really evaluate alternatives? Oklahoma State University recently performed a survey of cooperative managers and board members in Oklahoma to find out how they evaluate investment opportunities.

There were 35 cooperatives that responded to the survey, which covered several topics. These topics included:

Cooperatives were asked to place a level of importance on certain factors that they considered when making an investment decision. Five factors were listed with one being of little importance and five being very important.

When asked to rank important factors when considering a new investment the most important factor listed was the projected rate of return on the investment. Other factors, in order of ranking, are projected payback period, risk, potential to increase customer base or market share, and potential to increase service to members. However, all factors ranked above a level of importance of four.

The quality of information used in making an investment decision is an important consideration. When asked to indicated what tools boards used in making a decision, the overwhelming response was that their primary tool was the general manager. It also indicated that boards relied on verbal recommendations as opposed to written recommendations. The result of this section is listed in figures 1 and 2. 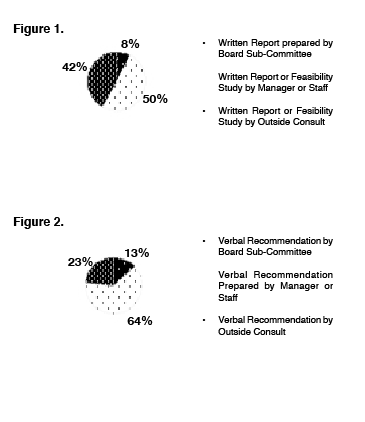