All irrigation waters contain some dissolved salts. Dissolved salts are present because some chemical elements have a strong attraction for water and a relatively weak attraction for other elements. Two such chemical elements, for example, are sodium and chloride. The amounts of these elements contained in water must be very high before sodium will combine with chloride to form the solid material sodium chloride, common table salt. The total amount and kinds of salts determine the suitability of the water for irrigation use. Water from some sources may contain so much salt that it is unsuitable for irrigation because of potential danger to the soil or crops. Irrigation water quality can best be determined by chemical laboratory analysis.

The Oklahoma State University Soil, Water and Forage Analytical Laboratory has developed chemical procedures for determining water quality. Test results, their interpretation, and a general recommendation on suitability of the water for irrigation use are reported.

The two most important measures for determining irrigation water quality are:

The total dissolved salt content is estimated by measuring how well the water conducts electricity. Salty water is a good conductor of electricity. Electrical Conductivity (EC) is measured in units of micromhos/cm (µmhoms/cm). The ppm salt concentration of the water is estimated by multiplying 0.66 times the EC value. For example, water having an electrical conductivity of 1000 micromhos/cm would contain about 660 ppm salt. Other analytical procedures are used to measure the amounts of individual chemicals, such as sodium, in the water. The list of chemicals (and their symbol or formula) routinely measured to determine irrigation water quality follow:

The most damaging effects of poor-quality irrigation water are excessive accumulation of soluble salts and/or sodium in soil. High soluble salts in the soil make soil moisture more difficult for plants to extract, and crops become water stressed even when the soil is moist. When excessive sodium accumulates in the soil, it causes clay and humus particles to float into and plug up large soil pores. This plugging action reduces water movement into and through the soil, thus crop roots do not get enough water even though water may be standing on the soil surface.

These two aspects of irrigation water (total salts and percent sodium) are grouped in relation to the levels present and their effects on crops and soils. This classification system is based on research conducted in Oklahoma, other states, and by the USDA Salinity Laboratory at Riverside, California. The diagram in Figure 1 illustrates the classification system. Since the degree to which sodium is damaging to soil is strongly influenced by the amounts of calcium and magnesium present, the sodium adsorption ration (SAR) is also used.

Figure 1 is used by taking the percent sodium reported on the water test and locating that value on the left side of the figure. Draw a line across the figure at this point. Next, find the value for the electrical conductivity along the bottom of the figure and at that point draw a line straight up and down. The water class is indicated where the two lines cross. 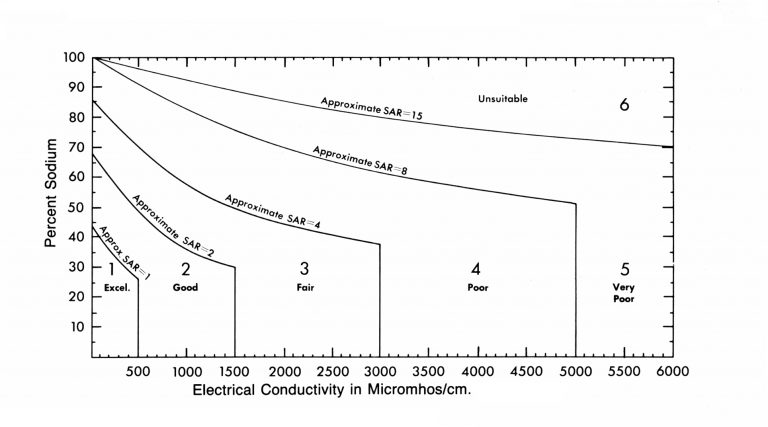 Oklahoma irrigation waters are grouped into six classes on the basis of soluble salt content and sodium percentage. Interpretation of these classes in relation to their use follows:

Class 1. Excellent. The total soluble salt content and sodium percentage of this water are low enough that no problems should result from its use.

Class 2. Good. This water is suitable for use on most crops under most conditions. Extensive use of Class 2 water on clay soils where little or no leaching occurs may eventually cause a saline or sodic soil problem. Normal rainfall will usually dilute the soluble salts and eliminate the risk of salt accumulation. If the water’s sodium percentage is high (above 30percent), gypsum can be used periodically to remedy the problem.

Class 3. Fair. This water can be used successfully for most crops if care is taken to prevent accumulation of soluble salts including sodium, in the soil. Good soil management and irrigation practices must be followed. Class 3 water can be used with little danger on permeable, well-drained soils. The water table should be at least 10 feet below the surface to allow accumulated salts to be leached below the root zone by adequate irrigation when rainfall is limited.

Class 4. Poor. Use of this water is restricted to well-drained permeable soils for production of salt tolerant crops. Irrigation practices must receive careful attention to avoid salt accumulation. Excess water must be applied when rainfall is not adequate to cause periodic salt leaching.

Good soil management practices must be used to maintain good physical condition of the soil. Soil fertility levels must be maintained at adequate levels. Use of this water on medium textured soils may cause soil salinity problems if good practices are not followed. This water is not recommended for use on fine textured soils.

Class 5. Very Poor. Use of this water is restricted to irrigation of sandy, well-drained soils in areas of the state which receive at least 30 inches of rainfall. This water should not be used without advice from a trained in irrigation water use.

Class 6. Unsuitable. Water of this quality is not recommended for crop irrigation.

The diagram of Figure 1 uses the primary criteria for classifying irrigation water, however, other components of the water which are less commonly a problem must sometimes be considered.

Residual Sodium Carbonate. When total carbonate levels exceed the total amount of calcium and magnesium, the water quality may be diminished. When the excess carbonate (residual) concentration becomes too high, the carbonates combine with calcium and magnesium to form a solid material (scale) which settles out of the water. The end result is an increase in both the sodium percentage and SAR. The USDA has established guidelines (Bulletin No. 197) for modifying water quality classifications based on residual sodium carbonate (RSC) expressed in units of milliequivalent (meq). Residual carbonate levels less than 1.25 meq are considered safe. Waters with RSC of 1.25-2.50 meq are within the marginal range. These waters should be used with good irrigation management techniques and soil salinity monitored by laboratory analysis. Risk is lowest with waters for which the RSC is at the low end of the range and which are being applied to permeable, well-drained, coarse-textured soils in high rainfall areas. RSC values of 2.50 meq or greater are considered too high making the water unsuitable for irrigation use. Modification of RSC by soil applied gypsum may permit use of waters with RSC values above the safe level.

Boron. Boron is present in water as boric acid and in this form may be toxic to plants even at very low concentrations. Plant species differ in their tolerance to boron as identified in Table 1. Classification of irrigation water in relation to its boron content and crop tolerance is shown in Table 2. Boron toxicity is not common in Oklahoma although boron is routinely analyzed in our irrigation water test.

Table 2.  Classification of Irrigated Water Based on Boron Concentration in Relation to Plant Tolerance

Conditional use of Low Quality Water

Gypsum.  When water contains high concentrations of calcium and sulfate, some of these two chemicals will combine in the soil and form gypsum. Therefore, the harmful soluble salts left in the soil will be reduced somewhat, and there will be less risk in using this water. Water which is high in gypsum can be used on clay textured soils.
Irrigation water which has a high sodium hazard (high SAR or RSC) may be used if the soil contains gypsum or if gypsum can be added to the soil. The amounts of gypsum required will depend on the excess sodium or residual carbonate in the water and how much water is applied.

The amount of gypsum needed to off-set residual sodium carbonate in an acre-foot of water can be calculated using the formula:

The value of RSC, given in meq, is reported on the irrigation water analysis report. For example, if 24 inches (2 acre-feet) of water is applied during the growing season and the water has a RSC level of 2 meq, the gypsum required per acre-foot of water would be:

For the 2 acre-feet of water applied, twice as much would be needed.

The gypsum could be added every four years at the rate of two ton per acre.
Many soils and waters in western Oklahoma contain native gypsum. Water which is of low quality because it contains excess residual sodium carbonate or excess sodium may be used on these soils with less risk. Water high in total salts, however, has more risk and should not be used on these soils.

Water Table. It is extremely important that the water table be at least 10 feet below the surface when low quality water is used. This allows water movement below the root zone if leaching becomes necessary and it eliminates movement of salts from the water table to the soil surface.

Type of Crop. Crops vary in their tolerance to salts as reported in PSS-2226. Low quality water may be used on tolerant crops after they are established. Using low quality water during germination and seedling development should be avoided, however, since most plants are very sensitive to salts at this stage of growth.

The Oklahoma Extension Service offers an irrigation water test through a County Extension Office, about one pint of water in a clean container is required. A small fee is charged to cover testing costs. Testing and reporting the results generally takes about three to five working days. A brief interpretation is provided on the report. More detailed interpretation can be found from an online interactive program at: soiltesting.okstate.edu/water-test-interpretation-program.