Black leg is a common disease of canola in most areas of the world where the crop is grown. It is widely regarded as the most important disease of canola, based on its history of severe yield losses in Canada, Europe and Australia before resistant varieties were developed or after new races of the pathogen overcame resistant varieties. In Oklahoma, black leg was first reported on cabbage in 1945. In October 2009, the disease was found on winter canola in northern Oklahoma, where it reduced yield by up to 50 percent in fields. Since 2009, the disease has become widespread in the state and has been confirmed in most canola-producing counties including Alfalfa, Caddo, Canadian, Cotton, Garfield, Grant, Kingfisher and Major Counties.

Black leg disease, also known as Phoma stem canker, is named after the dark lesions that develop on lower stems near the soil line of affected plants. However, the disease has stages of development that affect both leaves and pods, in addition to stems. Black leg is caused by two species of the fungus Leptosphaeria. Initially, aggressive and mild strains of the fungus were recognized based on severity of stem cankers. The aggressive and mild strains were later separated into different species. L. biglobosa is the mild species and generally affects plants later in the season by causing superficial stem cankers with only minimal yield impact. L. maculans is the aggressive species, which can attack plants at all stages of development and produce stem cankers that can girdle the stems and reduce yields. The outbreak in 2009 was caused by the aggressive species, and subsequent surveys have confirmed that L. maculans is the most frequent cause of black leg in Oklahoma, being isolated 90 percent of the time from plants with black leg symptoms.

Information contained in this fact sheet describes the biology and control of black leg of winter canola in the Southern Great Plains. The response of canola varieties to black leg and fungicide use recommendations are not included herein because variety and fungicide recommendations can change from year to year. To prevent black leg from negatively impacting seed yield, it is important to be familiar with its symptoms, the disease cycle and disease management practices described below.

Symptoms first appear on foliage as circular grey-colored spots on leaves about 0.5 inches in diameter (Figure  1). Black pepper-like specks appear in the center of the spots which are the reproductive structures (fruiting bodies) of the fungus (Figure  2). Often, early symptoms of black leg in the fall are not obvious because only a few scattered leaves are affected. When symptoms are severe, numerous leaf spots develop in the lower canopy, resulting in lower leaf yellowing and death. As the spots age, they become tan in color with more pronounced black fruiting bodies (Figure  3). Leaf spots may occur very early in the fall on seedling cotyledons, on rosette-stage young plants and/or on lower leaves of flowering plants in the in the spring, depending on weather conditions. The leaf spot stage of the disease is not damaging itself, but serves as a warning for stem canker development, which occurs on stems of affected plants in the spring.

As the crop begins to mature, following flowering in the spring, elongated lesions or stem cankers develop near the soil line (Figure  4). These stem lesions are tan to gray in color and may have a dark border. A dark decay is evident inside of affected stems that are cross-sectioned. Black pepper-like fruiting bodies of the fungus often develop within the lesions (Figure 4). Plants with stem cankers are weak and may lodge or snap off in the wind (Figure  5). Cankers that extend deep into the stem may also result in premature ripening and incomplete pod fill. Pod lesions may develop when disease pressure is severe, leading to contaminated seed. Pod lesions appear tan to grey in color, often with a dark border and black pepper-like fruiting bodies within the lesions. 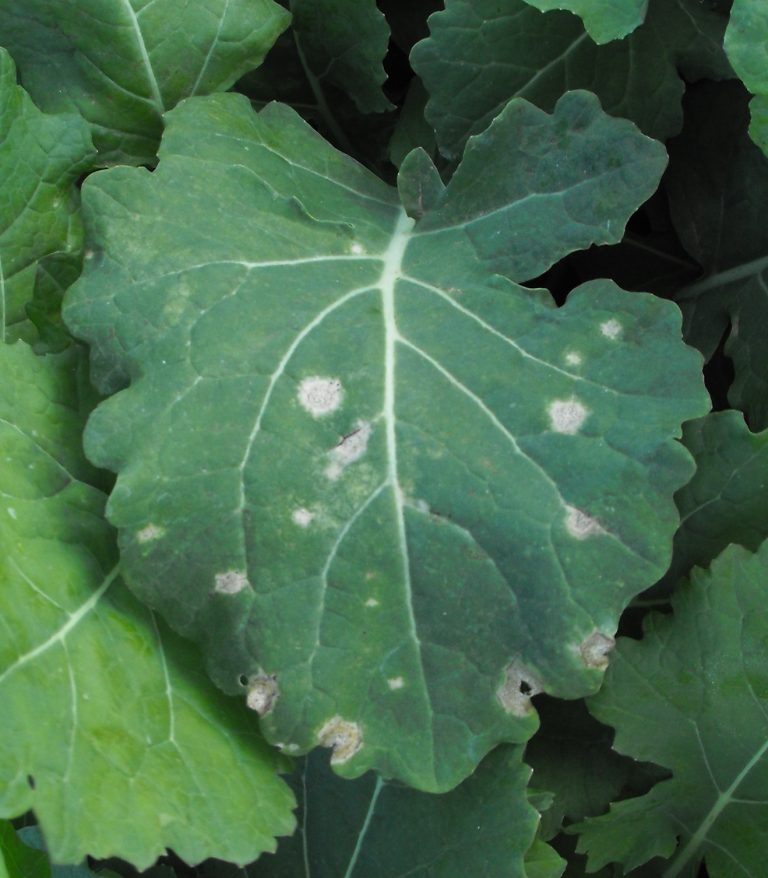 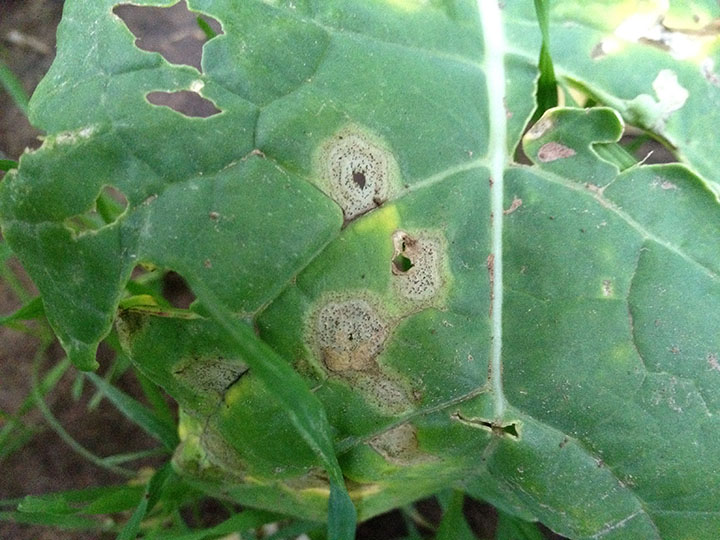 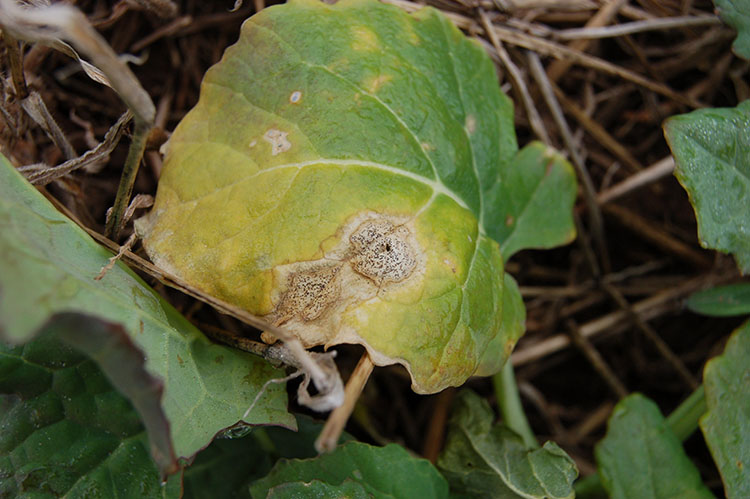 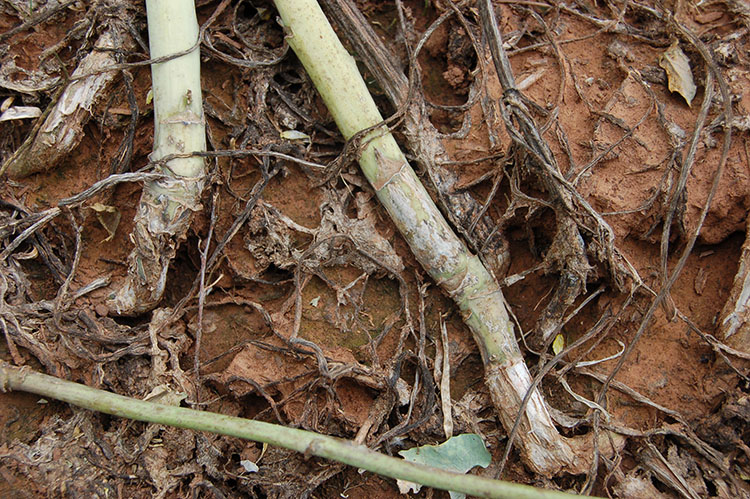 Figure 7. Stems of a susceptible variety girdled and constricted by black leg causing the plants to lodge.

The first infections of a new crop can arise from either infested seed or from airborne spores produced and released from black leg-infested crop residue. In canola, black leg outbreaks are attributed to infested crop residue on the soil surface, and seed contamination is only important for initial introduction of the disease into new areas. The airborne spores, called ascospores, are produced via sexual recombination in fruiting bodies on the stubble after the fungus ‘ripens’ on the stubble after harvest (Figure  6). Stubble ripens during periods of high soil moisture and moderate temperatures. During very hot and dry summers, fungus ripening on stubble may be delayed, resulting in late (spring) appearance of leaf spots. Ascospore release generally coincides with canola planting in the fall and most spores are released from September through April. The spores may travel long distances on wind currents, but most land within 1,500 feet from their point of release. Weather conditions following planting also influence if and when leaf spots appear. Ascospores are released soon after a rain and extended periods of leaf wetness and warm temperatures (70 F) are required for leaf infection.

The fruiting bodies that develop within leaf spots produce clonal, or asexual spores called conidia. Conidia are produced in a sticky matrix and are not airborne, but rather move only short distances by rain splash to adjacent leaves and plants. After leaf spots appear, there is a latent (symptomless) period when the fungus grows internally from the leaf through the leaf petiole into the stem base where a canker develops. Because stem disease is slow to develop, an early appearance of leaf spot in the fall increases the likelihood that basal stem cankers will become severe and cause yield loss. Stem lesions partially or completely girdle the stem base, restricting the flows of water and nutrients necessary for complete pod fill and may result in lodging or premature maturity. As with many diseases in other crops, blackleg is generally only an issue every few years, when weather conditions favor the causal fungus’ spore production and dispersal. 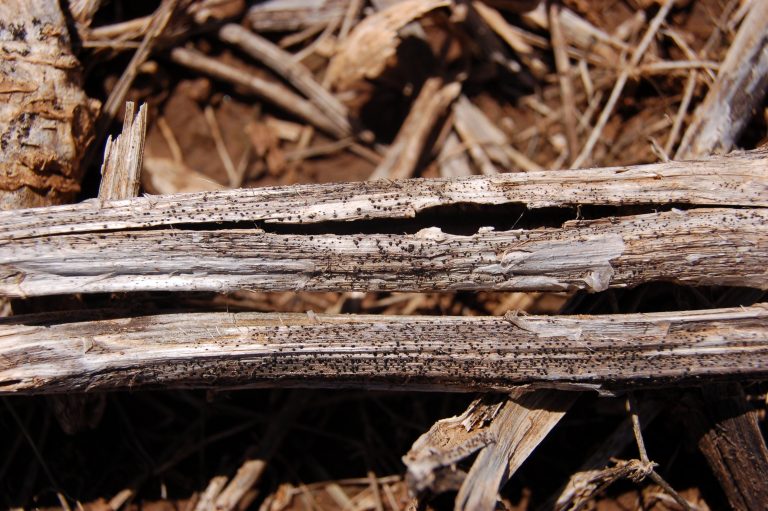 Figure 8. Fruiting bodies on canola stubble that produce the airborne spores that cause leaf spot.

The black leg fungus can affect a variety of Brassica crops including canola, cauliflower, turnip and cabbage. It can also attack related crop and weed species in the mustard family, such as Sinapis (white mustard), Raphanus (radish), Descurainia (tansy mustard, flixweed), Sisymbrium (rocket), Thlaspi (pennycress), and Capsella (shepherdspurse). Alternate hosts may be important in maintaining the pathogen in the absence of canola.

Blackleg is best controlled by integrating a variety of methods. The following recommendations should be followed as crop management allows.

Fungicide seed treatment: Seed treatment will help prevent the spread of black leg from infested seed to seedlings, but will not protect seedlings from infection by airborne spores produced on infested canola stubble. However, seed treatment is important for protecting against the introduction of new races of the pathogen from other geographic regions carried on seed. Most canola seed sold in the region is treated with combination seed treatments that contain fungicides for control of seedborne black leg and seedling damping off, and insecticide for control of early-season aphids.

Scouting: Beginning at the two- to four-true leaf stage of crop development, fields should be periodically inspected for leaf spot symptoms of black leg. Check for symptoms at points nearest to standing canola stubble from previous crops and about 10 to 14 days after significant rainfall events. Leaf spot from black leg should not be confused with winter dormancy related senescence and dieback of leaves in cold weather. In the U.K., foliar-applied fungicides for black leg control are recommended when 10 percent of leaves show leaf spot symptoms in the fall.

Residue management: Infested canola stubble left standing on the soil surface is a source of airborne ascospores that can infect nearby plants for up to two years. Crop management practices that reduce the longevity of old crop residue on the soil surface should be beneficial for reducing black leg. While plowing residue under is often recommended, it is unlikely to be adopted because the beneficial soil health and conservation effects from minimum and no-till crop management are highly valued by both farmers and government agencies.

Crop rotation and site selection: Rotate out of canola for at least two years with non-host crops, such as wheat. Longer rotations ensure that infested stubble has sufficiently degraded and spores are no longer produced.

Weed control: Volunteer canola and weedy mustards should be controlled in and around canola fields so they do not serve as sources of spores and reduce the effectiveness of crop rotation. When canola follows wheat, use short residual herbicides for the mustards in the wheat.

Foliar fungicide application: A foliar fungicide may be warranted if black leg symptoms are easily observed at the seedling and rosette stages in the fall, or if a susceptible variety is being grown. The best application timing appears to be at mid- to late-rosette stages in the fall, about the time glyphosate is applied to Round-up® ready varieties and hybrids. Consult the Extension Agents Handbook of Insect, Plant Disease, and Weed Control (Circular E-832) for more information on fungicides registered for use on canola. Results of fungicide performance trials are available at OSU Canola.


auto-loaded widget needs a div on your web page with this id
Print-friendly PDF
Topics:CanolaCropsFungicidesGrains & OilseedsInsects, Pests, and DiseasesPesticides

The various insecticides for proper management of insect and mite pests and the instructions for using them in relation to a canola crop.