Pear trees are planted in the landscape for their ornamental spring blooms or edible fruits. They are tolerant of most soils and adapt readily to many regions. However, pear trees are susceptible to a disease called pear rust that causes spots on leaves and destruction of the fruit. The disease can cause premature leaf drop and total crop loss.

The leaves may be infected as they emerge from the buds. If a leaf is infected while very young, the degree of spotting and tissue distortion may be severe. If the leaves are larger when infected, the spots will be more spread out over the leaf (Figure 1). These spots will enlarge over the next few months and may coalesce. Leaves, flowers and young fruits are susceptible to the infection. In late spring, tube-like projections are visible on the fruits or underside of leaves (Figure 2). By May, new infections no longer occur on pear leaves, so young leaves growing at the tip of the branch may appear unblemished (Figure 3). Shedding of heavily spotted leaves in the summer is common when hot dry weather occurs.

The rust on pear trees (Pyrus spp.) is caused by several different fungi in the genus Gymnosporangium. Rust fungi in this genus have complicated life cycles that alternate between two different hosts. One host is in the family Rosaceae (e.g. Pyrus) and the other in the coniferous Cupressaceae, usually a Juniperus species, which have common names of “juniper,” “cedar” and “redcedar.” Eastern redcedar (J. virginiana) is the most common conifer host in Oklahoma.

Figure 1. Initial spots on pear leaves due to pear rust.

The fungus survives the winter in galls it forms on the Juniperus host. In late February through early May, these fungal galls produce conspicuous orange gelatinous spore-bearing structures. Different species of Gymnosporangium cause different symptoms and signs on the cedar trees, including gooey orange galls (cedar-hawthorn rust, G. globosum), orange swollen branch galls (cedar-quince rust, G. clavipes) and needle rust (Asian pear rust, G. asiaticum) (Figure 4). Note, although cedar-apple rust with its larger, spherical juniper galls occasionally affect pear, it is not the major cause of rust on pear trees in Oklahoma. Other Gymnosporangium spp. may be present in other parts of the United States, but only the three mentioned have been identified in Oklahoma on pear.

tube-like projections are visible from pear fruits (left) or the underside of leaves (right).

When the fungi are active on the junipers, the fungus produces spores that are carried on the wind to broadleaf rosaceous tree hosts (including pear trees) the leaves, flowers and fruits of which can be infected. Yellow, orange and/or red leaf spots will develop, which enlarge in the spring and early summer. By May, opposite of each spot, bumps will develop on the underside of the leaves or on fruits and these later develop orange-pink to white spore-bearing structures or tubes. Spores will fall from these tubes and can be blown to the juniper host (Figure 5). The initial infection of the juniper in late spring or summer is symptomless, and eventually results in fungal galls that do not mature for 18 months to 20 months. However, most junipers host numerous rust infections of different ages and the orange gelatinous stage of the disease is visible annually on junipers in the spring.

Figure 4. Orange spore-forming structures of cedar-quince (top) and cedar-hawthorn rust (left) are present in early spring. Spores from these structures are blown on the wind and can infect pears.

Cultural management for pear rust is achieved by separating the broadleaf and conifer hosts. The spores may blow for ¼ a mile or greater, so this option is seldom fully achievable. Planting resistant hosts is effective for management of many plant diseases, but resistance to pear rust is unknown. Research trials to monitor cultivar susceptibility were planted in 2021 in Stillwater and will provide this information in a few years. Some pear cultivars, such as Bartlett, appear to have moderate resistance to pear rust in Oklahoma gardens. 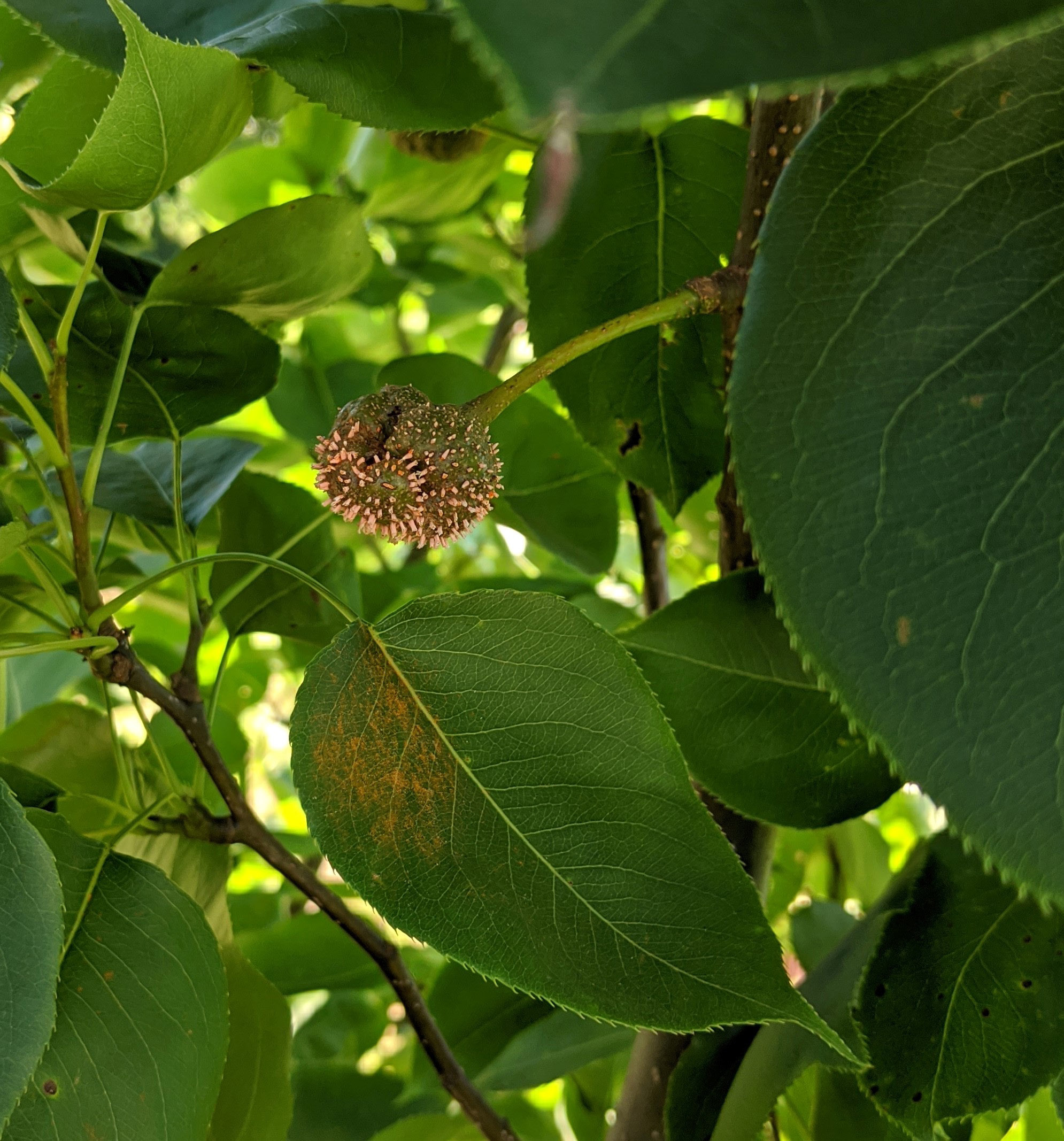 Figure 5. A rust-infected Asian pear fruit is releasing spores, which appear as orange dust on the leaf below. These spores are blown on the wind and can infect the juniper host.

In landscapes where pear rust has been a problem in the past, preventative fungicide applications to pear trees are recommended. Since there are many different types of pears (ornamental, edible but non-bearing and edible bearing), care must be taken to select a product suitable for the plant type. Fungicides must be specifically labeled for the disease (rust) and site, and a plant treated with an off-label application (i.e. treating an edible pear with a product labeled for ornamental use) can result in fruit that cannot be consumed that season. Consult with your local OSU Extension educator if additional guidance is needed.

The first fungicide application should be applied as leaves and blooms are emerging from buds. A systemic fungicide is preferred, since the product can move inside the plant to protect new areas of the emerging leaves and blooms. Additional fungicide applications are suggested seven days to 14 days later. Shorter intervals are used when new growth is rapidly developing or rainfall has occurred. To prevent the development of fungicide resistance, a rotation of at least two different fungicide classes is recommended. The pears are generally susceptible through early May. In late May into June, the pears release spores that infect junipers. To protect junipers, fungicide applications should begin in late May and applications seven days to 14 days apart may be needed until July. It is not helpful to treat pears in the summer since fungal galls on junipers only produce spores in the spring. Existing pear rust leaf spots may continue to enlarge, but new leaves will remain uninfected.

Although pear rust can cause varying levels of defoliation, the long-term effect on tree health is unknown. Many trees selectively shed some leaves in summer to reduce stress from heat and drought. However, the rust-related defoliation can be devastating to edible pears since an entire crop loss may result. Therefore, growers who want to produce edible pears will likely need annual applications of fungicides in the spring to early summer.

The role foliar diseases plays in growing wheat plants and the effective fungicides that prevent those diseases from harming the plant.

A summary on the findings of an alternative approach to using a fungicide to facilitate wheat production.