Poultry litter is a mixture of poultry manure, uneaten feed, and bedding material such as wood shavings or rice hulls. It contains approximately 4 percent nitrogen, 2 percent phosphorus, and 3 percent potassium and has long been used as a fertilizer on pastureland. In some locations, such as eastern Oklahoma, the rate of growth in the poultry industry has been rapid. There are concerns that the amount of poultry litter being produced will exceed the capacity of nearby pastures receiving litter applications and potentially effect the quality of surface or ground water.

Nitrates in drinking water can be a health hazard, especially for pregnant women and infants. Because nitrates can readily move downward through soils, care must be taken when applying nitrogen fertilizers on sites where depth to groundwater is shallow. Phosphorus is the nutrient most often responsible for excessive growth of algae in streams and lakes. This leads to problems such as bad tastes and odors in drinking water, fish kills, and lowered oxygen levels which prevent bass and many other desirable fish species from being able to reproduce and survive. The term for this excessive nutrient enrichment is eutrophication.

This publication reports on some preliminary research into the application of poultry litter to a pine plantation and attempts to answer the following questions: 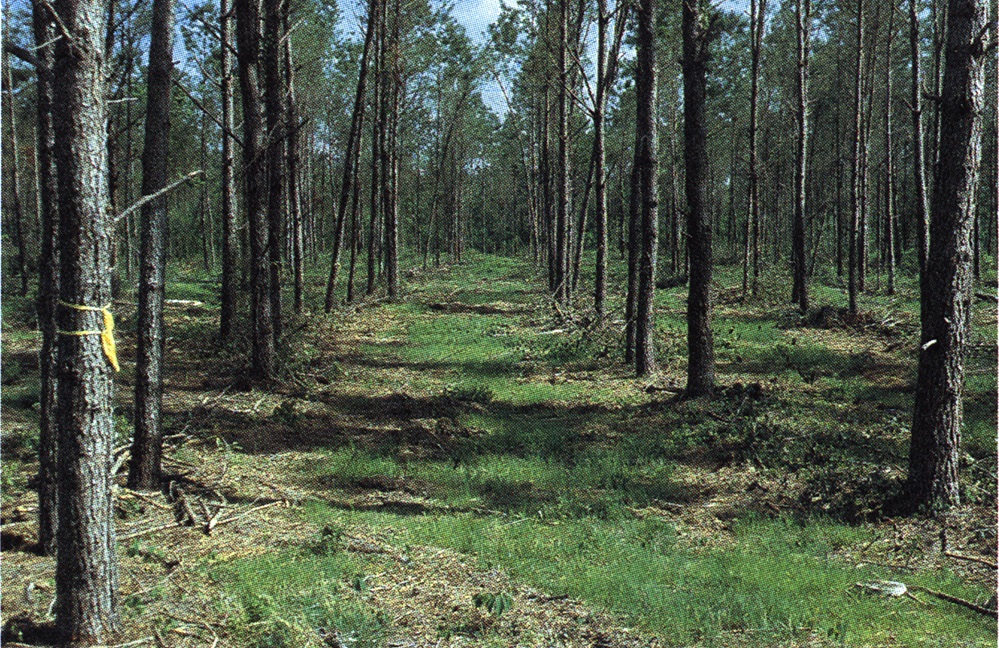 Figure 1. After thinning equipment could be driven down the rows where trees had been removed. 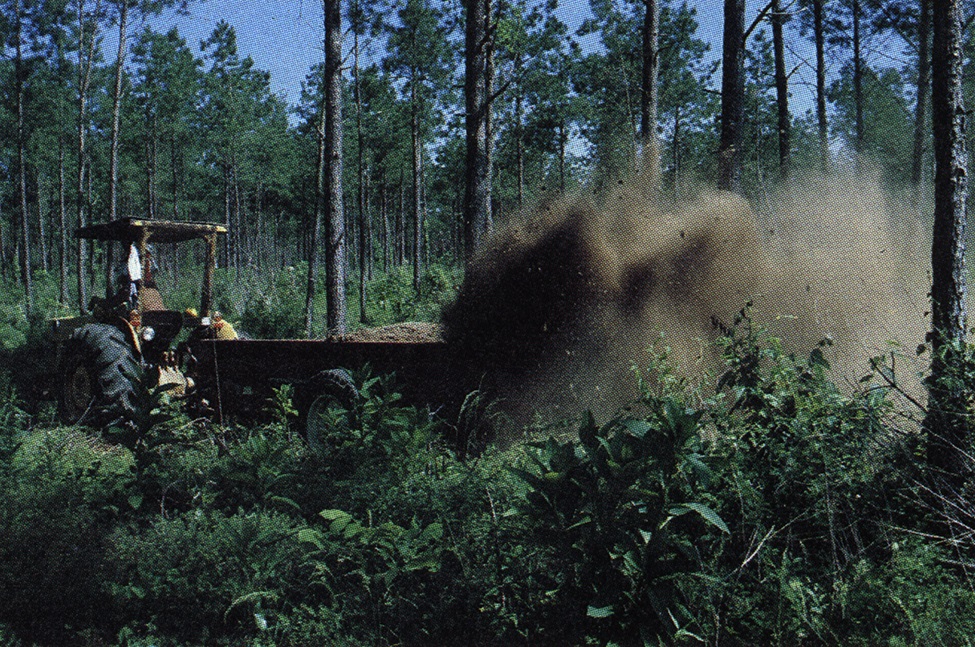 The location for the study was near the community of Broken Bow in McCurtain County, Oklahoma. The site was an overstocked, 16-year-old loblolly pine plantation with a nearly level slope (0 to 2 percent) and sandy loam soils. Prior to the application of litter, the stand was thinned to 180 trees per acre. After the thinning, a severe storm blew down many trees, reducing stand density to 80 to 100 trees per acre. Five different fertilizer treatments and a control were used on randomly selected, one-third acre plots.

The chemical fertilizer treatment was similar to the fertilization conducted by some forest industries on pine plantations following thinning operations. The two and four ton poultry litter application rates were similar to the rates of application commonly used on pastureland. 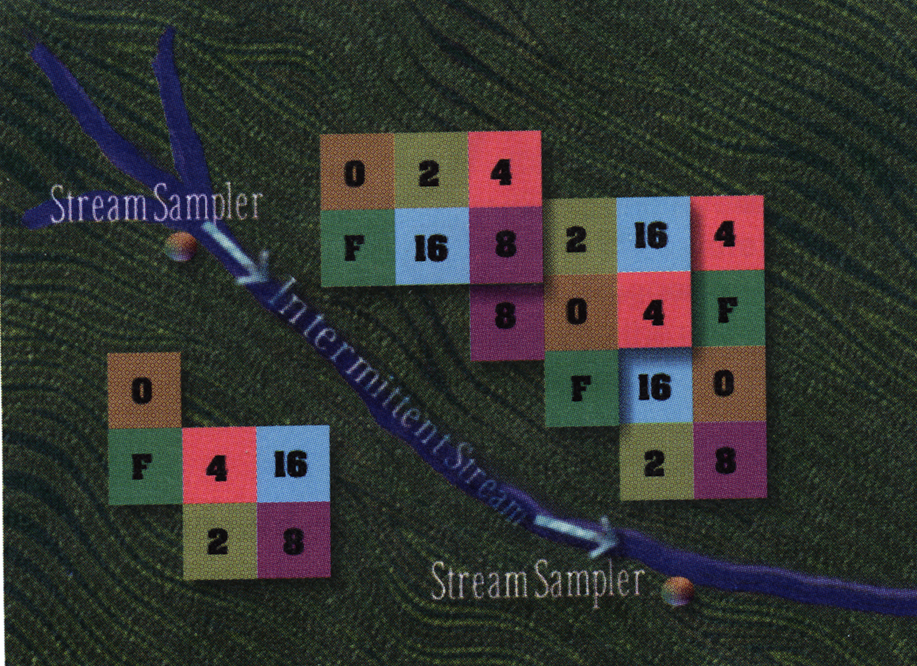 Amounts and types of fertilizer used on experimental plots. 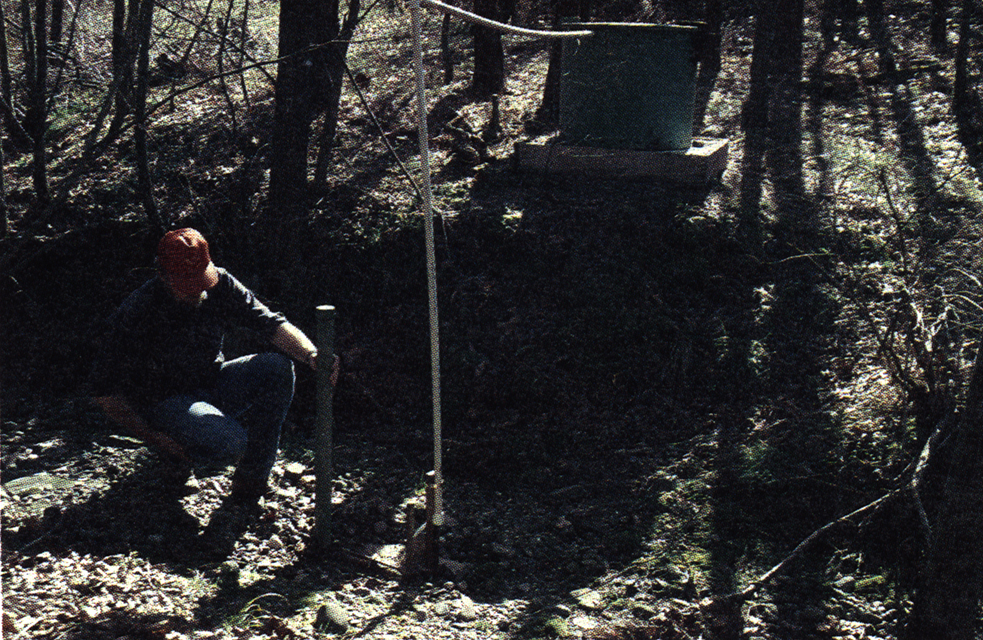 Figure 4. The monitoring sites were located in an intermittent stream channel. The downstream location is shown here. Water samples were automatically collected during stormflow events.

The following four items were measured during the study:

Figure 5. Two Lysimeters were located in each plot and soil water was collected after each significant rainfall. 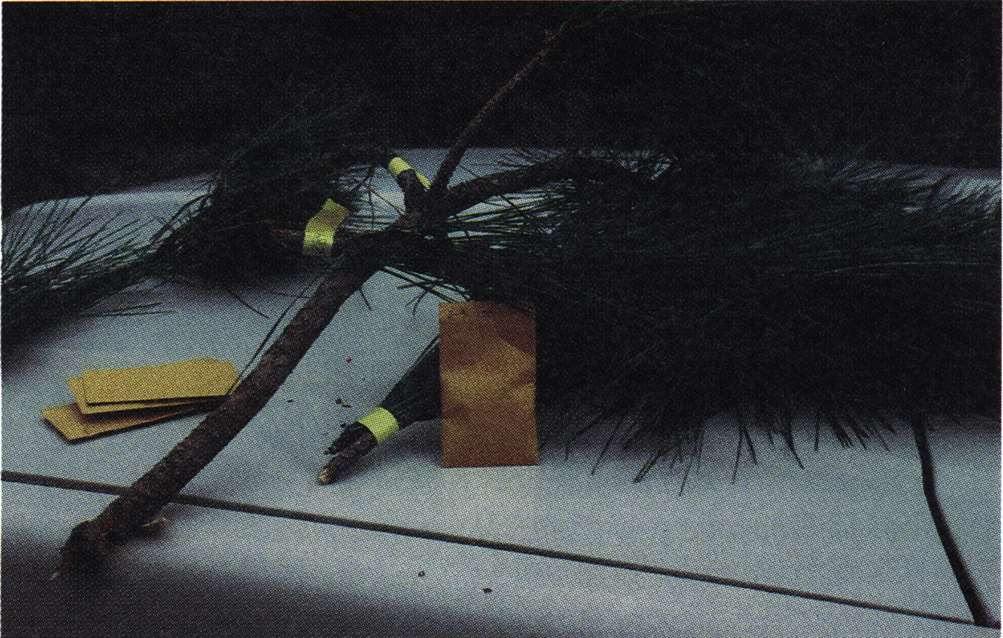 Figure 6. Foliage samples were collected at the same time each year.

Stream water was sampled during storm events at sites above and below the study area. In the 15 storms following fertilizer application, nitrate-N levels were significantly higher below the site than above it, but the average increase was less than 0.1 ppm. Phosphorus remained at pre-treatment concentrations.

Tree height increased 4.8 feet and diameter increased 2.2 inches across all plots, including the control, over three growing seasons. The only statistically significant increase in growth, over the control, occurred in tree height in the high poultry litter treatment. The lack of faster growth in fertilized treatments was attributed to the fact that initial levels of N and P in the foliage showed no nutrient deficiency. In addition, the increased growth due to the heavy thinning conducted at the start of the study may have masked the fertilization responses.

Poultry litter has potential for use as a fertilizer on some forest lands. In this study, potential increases in growth may have been masked due to the effects of low stand density, moderate levels of native soil fertility , and a relatively short three year study period. No ill effects on trees were seen, even at the heaviest litter application rates. Rugged terrain and the potential for stumps to damage tires and the undercarriage of applicator vehicles are practical barriers to the application of poultry litter on forest land.

The potential for surface and ground water to be affected by improper poultry litter application to forest lands exists. This study provided indications that nitrogen from poultry litter could move to soil water. In addition, while only one stream sampler was used above and below the study area, our results showed a consistent increase in nitrogen downstream. However, even with the high rates applied in the study, the close proximity of the treatment areas to the stream, and the fact that majority of the watershed was occupied by the study area, nitrogen concentrations in stream water rose only slightly in absolute level. Before forest land managers attempt to use poultry litter on an operational basis, further research is needed to determine guidelines that take into account such factors as

The results of this preliminary study should not be used as the basis for operational litter applications because different forest sites vary widely in soils, slopes, tree species, stand age, distance to ground or surface waters, and other factors. Further research is needed before specific application rate guidelines can be developed for the application of poultry litter to forest land.

Oklahoma Secretary of the Environment

For further information on this study refer to:

General and production-based information about cross laminated timber (CLT), as well as the benefits and concerns associated with using CLT.