Anthracnose and Other Common Leaf Diseases of Deciduous Shade Trees

Home gardeners are justifiably concerned when foliage of their yard trees become diseased, especially when these diseases cause defoliation, twig and limb death, and perhaps death of a tree that has been defoliated several years in a row. Concerned home gardeners need information on how to prevent or otherwise control leaf diseases. This fact sheet was produced to describe the symptoms and control of leaf diseases of deciduous hardwood trees commonly planted in yards.  Leaf spot and blight diseases of coniferous trees (junipers, pines, etc.) are covered in several other factsheets including EPP-7330 “Diplodia Tip Blight and Canker of Pine” and EPP-7331 “Dothistroma Needle Blight of Pine.”  Powdery mildew diseases of shade trees are covered in Extension Fact Sheet EPP‑7617, “Powdery Mildews of Ornamentals and Fruit, Shade, and Nut Trees.” Though the pecan tree is sometimes used as a shade tree, its leaf diseases are not covered here; pecan leaf disease control is discussed in Extension Fact Sheet EPP‑7642, “Pecan Diseases: Prevention and Control.” Diseases of fruit trees are covered by several Extension Fact Sheets and Current Reports.

Leaf diseases of deciduous hardwood trees are grouped into six categories, to simplify their identification, as follows1. (See Figure 1a-f for a pictorial representation of the symptoms.)

Anthracnose—Irregular dead areas on leaf margins, between and across and/or along veins, often moving onto the shoots and small twigs; sometimes whole leaves are engulfed.

Leaf spot—Dead spot on the leaf that is well defined from healthy tissue.

Leaf blotch—Dead area on the leaf that often diffuses into healthy tissues.

Shot‑hole—Loss of dead areas inside of spots that result in a series of holes in the leaf.

Leaf‑blister—Leaf spot or blotch that is swollen or raised, so the area appears blister-like on the upper surface of the leaf.

Powdery mildew—Superficial growth of white to gray-white fungus material on leaves and shoots. 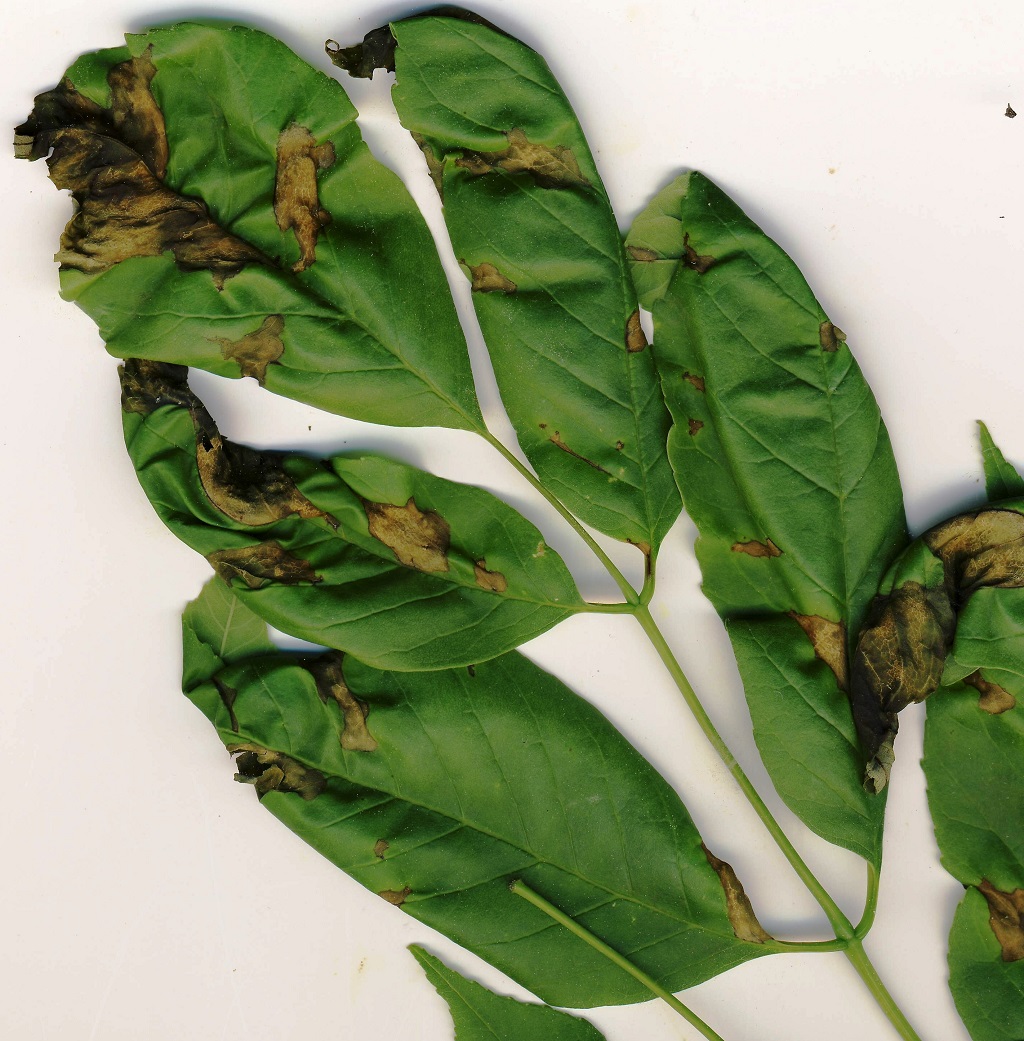 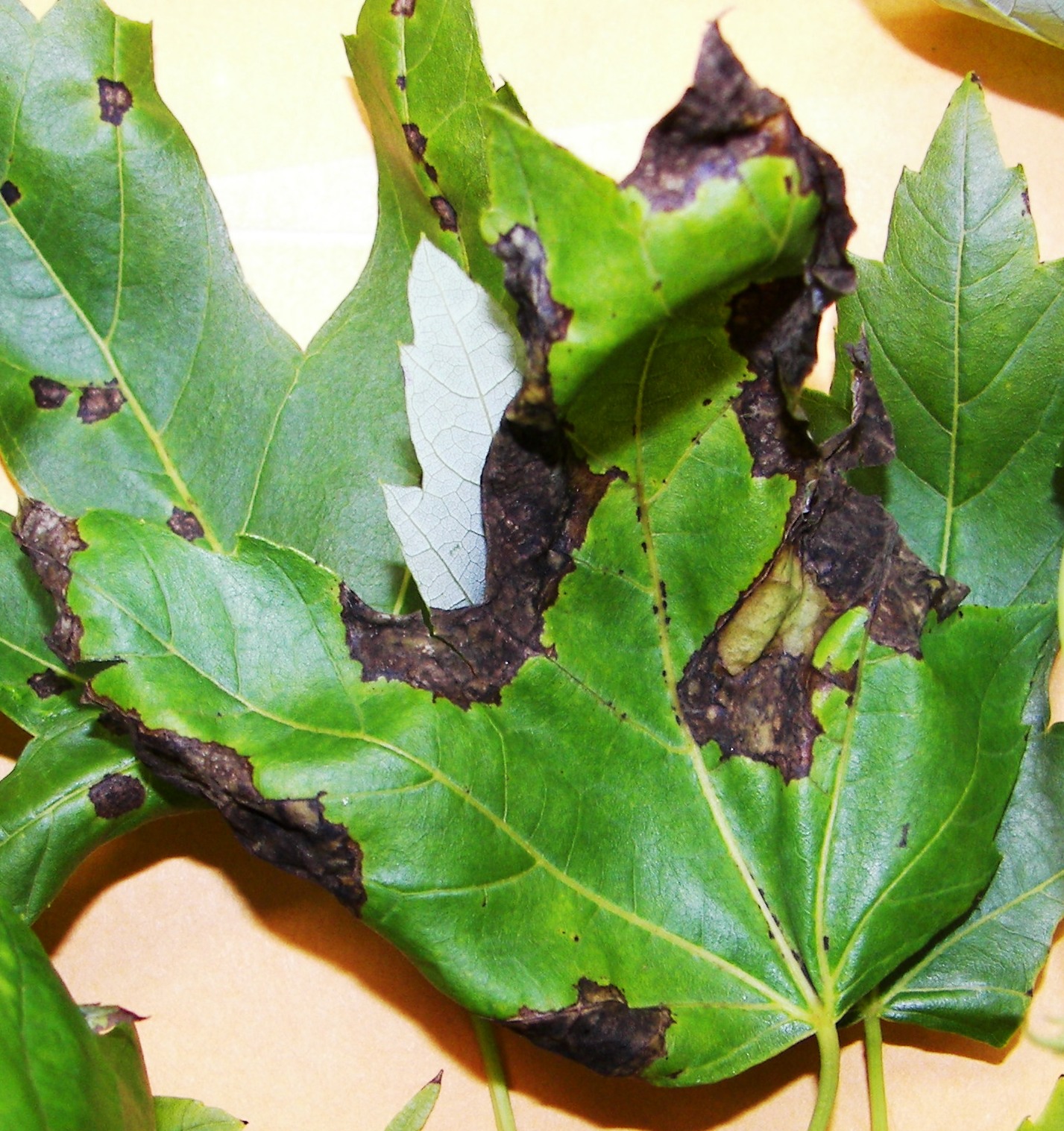 Oak (Quercus spp.)—Anthracnose, caused by the fungi Apiognomonia errabunda or Discula quercina, is a common disease of oaks. Rainy weather favors infection and defoliation may result. Infected areas frequently run together and cause the appearance of a leaf blotch or blight. The dead areas follow smaller veins and are bound by larger veins.

Sweetgum (Liquidambar spp.)—Anthracnose of sweetgum leaves is caused by the fungus Gloeosporium nervisequum (syn. Discula nervisequa). Infection by this fungus causes black areas on the leaves.

Sycamore and London plane tree (Platanus spp.)— Anthracnose of sycamore and London plane tree is caused by the fungus, Apiognomonia veneta (syn. Gnomonia platani). The London plane tree is more resistant to anthracnose infection than are sycamore trees. Anthracnose is the most serious disease of sycamore. The first symptoms appear in early spring as the leaves begin to unfurl from the leaf buds, and at this stage the disease may be mistaken for frost damage. Infected leaves that do not drop will develop light brown dead areas, usually along the veins. The spots may enlarge to cover entire leaves and cause premature defoliation.

Walnuts and butternut (Juglans spp.)—Anthracnose, sometimes called brown leaf spot, is caused by the fungus Gnomonia leptostyla(syn. Marssonia juglandis). Anthracnose is a common disease of these trees. Leaflets are infected during the summer and irregular brown spots develop. Defoliation may result.

Ash, green, and red (Fraxinus spp.)—Several leaf spot diseases occur on ash, but these are considered to be minor. The most common leaf spot disease is caused by Phyllosticta fraxinicola. This fungus causes large, yellowish brown lesions with small black spots developing on the lower side of infected leaves. Cylindrosporium fraxini (syn. Pseudocercosporella fraxini) has also been reported in Oklahoma.

Cottonwood, Lombardy poplar, white poplar (Populus spp.)—Leaf spots on Populus trees are caused by a variety of fungi of which Marssonia spp. are the most common. It causes brown spots and premature defoliation. Septoria spp. have also been found.

Elm (Ulmus spp.)—There are many fungi that cause leaf spots of elm. The most common one is black spot (caused by Gnomonia ulmea, syn. Stegophora ulmea). The first symptoms of black spot appear early in the spring as small white or yellow flecks on the upper leaf surface. The flecks enlarge and their centers turn black (Figure 4). If infections are heavy, leaves may drop prematurely. Usually, the disease becomes prevalent in the fall about the time of normal leaf drop and little damage to the tree occurs. Another common leaf spot is anthracnose caused by Gloeosporium ulmicolum. Infections by this fungus result in reddish brown spots. 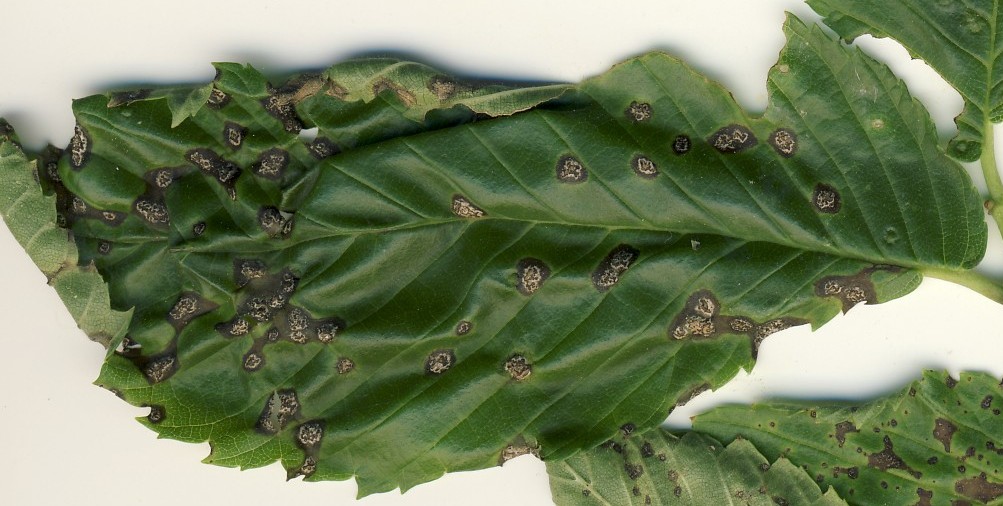 Hackberry (Celtis spp.)—Many fungi cause leaf spots on leaves of hackberry during rainy seasons. These leaf spots are seldom serious enough to require a fungicide application.

Honey locust (Gleditsia spp.)—A leaf spot of honey locust is caused by Melasmia spp. or Linospora gleditschiae. Numerous black fruiting bodies of the fungus form on the lower side of the leaves.

Magnolia (Magnolia spp.)—Fifteen species of fungi cause leaf spots on leaves of magnolia trees. Septoria magnoliae is found most commonly in Oklahoma. It causes brown lesions. Leaf spots of magnolia are seldom serious.

Maple (Acer spp.)—Many fungi cause leaf spots on maple.  One common species is Phyllosticta minima which is characterized by large irregular spots with brownish centers and purple‑brown margins. Black fruiting structures develop in the center of the spots. The disease is most severe on red, sugar, and silver maples.

Mulberry (Morus spp.)—Leaves of mulberry trees are spotted by two fungi, Cercospora moricola and Cercosporella mori, which cause reddish‑brown spots. These diseases are most severe during rainy weather.

A blight of mulberry leaves is caused by a bacterium, Pseudomonas syringae pv. mori, which at first appears as water‑soaked spots. The spots later become sunken and black. The leaves become distorted, and infected leaves on the twig tips wilt and die.

Oak (Quercus spp.)—Leaf spots on oak leaves are caused by many fungal species. In Oklahoma, the most common one is caused by Actinopelte dryina (syn. Tubakia dryina) (Figure 5). Actinopelte leaf spot is common on pin oak and on oak trees planted in soils with pH greater than 7.0. Leaf spot diseases rarely cause much damage, as they become numerous only late in the season. 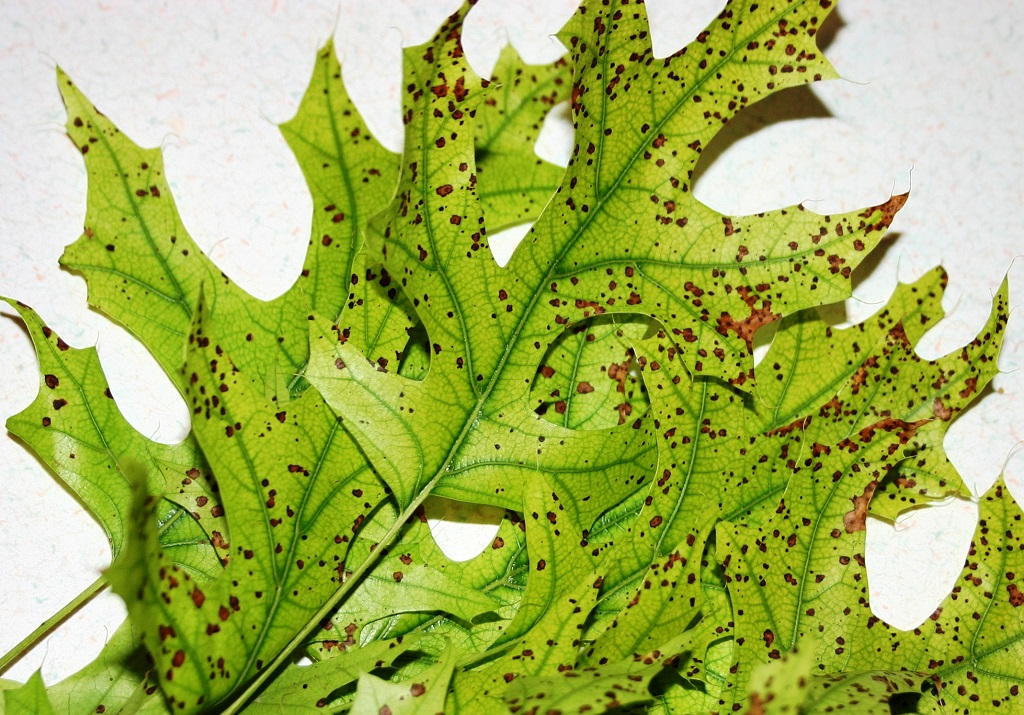 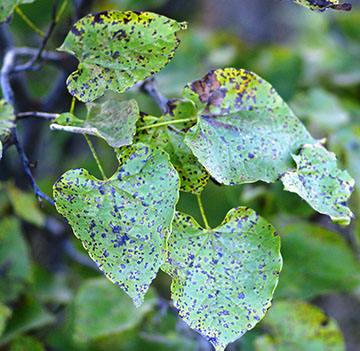 Walnuts and butternut (Juglans spp.)—Brown leaf spot, caused by the fungus Gnomonia leptostyla (syn. Marssonina juglandis), is a common disease of walnuts and butternut. Leaflets are infected in the summer and develop irregular dark brown or blackish spots. Defoliation may result.

Downy spot or yellow leaf blotch, caused by Microstroma juglandis, causes a yellow blotching on the upper side of leaves and a matching white coating on the underside of infected leaves.

Elm (Ulmus spp.)—Leaf curl is caused by Taphrina ulmi. Infection by this fungus occurs in early spring and results in small blisters, which eventually cause abnormal leaf development. 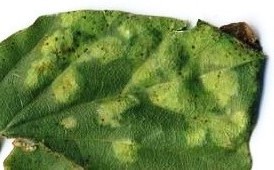 Most leaf diseases of yard trees are controlled by gathering and destroying fallen, infected leaves. Shoot tips and twigs that have been blighted by anthracnose should be removed by pruning. Avoid irrigation methods that wet the lower canopy of the tree. Consider thinning the canopy to allow for greater air circulation which reduces periods of leaf wetness.

Where fallen, diseased leaves and twigs have not been destroyed, chemical control is the alternative approach. For suggested fungicides, consult the current Extension circular E-832, “OSU Extension Agents’ Handbook of Insect, Plant Disease, and Weed Control.” During very rainy springs when leaf diseases become severe, two to three fungicide applications are needed for good control. Begin when the leaves are first unfurling from the buds. Repeat when the leaves are half grown, and again when the leaves are fully developed.

Trees that have been affected by leaf diseases every season should also be well fertilized and watered to maintain vigor. Do not fertilize during early fall. Fertilize only after the trees are dormant in late winter to early spring.