Due to the specialization and integration of the modern poultry industry, poultry farms have the potential to import more nutrients than what is exported from the farm in the form of animal and plant products.  In the past, phosphorus imported in poultry feed often remained on-farm in the form of poultry litter, a mixture of bedding material and manure. This litter was often land applied at rates to meet crop nitrogen needs, which resulted in soil phosphorus buildup on some farms.  Because the nutrient ratio in litter is different from that of plant nu­trient requirements, careful consideration must be taken when land applying to avoid over-application of certain nutrients, pri­marily phosphorus. If poultry litter land application is not properly managed, excess phosphorus application could degrade water quality through runoff into surrounding surface water resources. These concerns have led to environmental regulations, litigation, and successful efforts to move poultry litter outside of critical watersheds.

Figure 1 illustrates the annual amount of broiler litter produced in Eastern Oklahoma counties, which is where the majority of the state’s poultry industry is located.

The most obvious solution to this problem is to export the excess manure nutrients out of the phosphorus dense watersheds into areas deficient in soil phosphorus, relative to agronomic needs. Figure 2 shows the demand for phosphorus reported in tons of broiler litter for all Oklahoma counties.

However, since poultry litter nutrients are not as concentrated as commercial fertilizer, transportation cost is the most limiting factor for exporting poultry litter away from nutrient sensitive watersheds.  The alternative litter storage technique described below promotes degradation of litter carbon, which appreciably reduces the total mass of the litter and also increases the phosphorus and potassium concentrations compared to fresh or normally stored litter.  The advantage of this process is that the final product (degraded litter) can be transported at a lower cost per lb of nutrients, or put another way, it can be transported greater distances before the transport cost exceeds manure value. 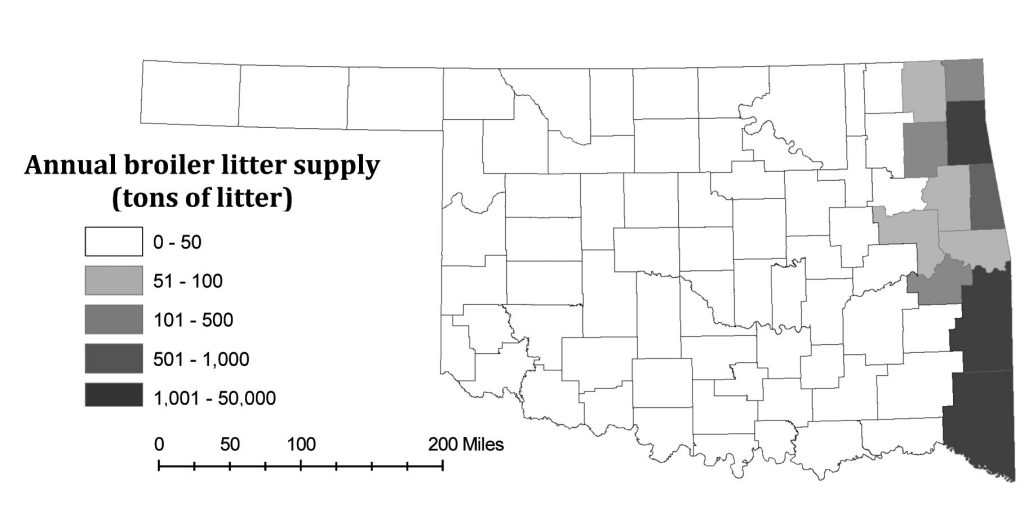 In order for the process to be effective only two requirements are necessary: adjustment of litter dry matter to 0.60 (weight solids/total weight) and covering with a suitable tarp. The process was designed to use little time, money, and effort compared to a traditional composting system that involves addition of bulking agents that would increase litter mass and dilute phosphorus concentration.

Uniformly add enough water to decrease dry matter content to 0.60.  The amount of water (gallons) to be added per ton of litter is calculated as:

For example, poultry litter with a dry matter of 0.70 (30 percent moisture content) would require 57 gallons of water per ton of litter.  The water can be applied with a hose after the flow rate of the hose (in gallons per minute) is determined.  Knowing the total weight of litter to be treated and the necessary volume of water from the previous equation, the necessary “spray time” (in minutes) can be determined by:

For example, a 25 ton litter pile with 0.70 dry matter (from the previous example) would require 1,225 gallons of water that can be provided by spraying a hose with a flow rate of 20 gpm for 71 minutes.

Water can be applied as the litter pile is being mixed with a front end loader or while being dumped at a new location.  You could estimate the litter weight in a bucket load and apply the amount of water necessary for that amount of litter while it is slowly being dumped in forming the new pile.

Step 2. Cover the pile with a semi-permeable tarp

We used a typical polyethylene tarp (6 mil thickness and 10 mesh) considered low to medium weight purchased from a local hardware store. The purpose of the tarp is to prevent the pile from drying too quickly, allow some oxygen to diffuse into the pile (preventing anaerobic conditions), prevent rainfall contact, and reduce the amount of ammonia volatilization. According to Oklahoma regulations all litter piles must be covered or bermed.

Step 3: Choose one of the following options:

Option 1:  Never turn or mix the litter and simply allow the pile to remain covered for two months.  Although this method is effective at degrading litter and reducing mass, research shows that the piles turned after one month will degrade more than piles not turned (Table 1).

Option 2: Mix the litter after one month using a front end loader or some type of heavy equipment.  This introduces more oxygen into the system and mixes the inner portion of the pile with the outer portion.  Re-cover the pile with the tarp and allow further degradation for an additional month.

Option 3: Construct a framework of perforated pipe within the pile (no pile turning).  For our 6 ton piles, we used 4-inch diameter perforated PVC pipe laid on the ground in the shape of a cross with a single vertical pipe extending from the center.  Litter was dumped directly on top of this pipe framework with the vertical pipe extending out from the top of the pile.  The tarp is still necessary for this process.  The perforated pipe system allows for greater aeration of the pile without the need for turning or mixing.  We found that this system resulted in greater litter degradation (i.e. mass reduction) compared to the static piles with no pipes (option 1; Table 1).

Table 1. Impact of the litter degradation storage process on percent mass reduction, nutrient content, and litter value after a two-month period. Nutrient content is shown on a dry mass basis. Litter value is expressed on both a dry and wet mass basis.

As a result of the litter carbon degrading to carbon dioxide, the storage techniques are able to reduce litter mass from 15 percent to 23 percent and concentrate the nutrients (Table 1).  This concentration of nutrients increases litter value per ton.  Also notice that although the process involves adding water to reduce dry matter to 0.6, the litter does dry out to levels similar to the original litter.  The aeration pipes allowed the litter to dry more than the original litter.  This drying effect also increases the litter value on a wet weight basis.  Litter value was based on the concentration of N, P2O5, and K2O and current fertilizer prices.  Based on the value of the wet litter shown in Table 1, a standard tractor-trailer load (24 tons) of normal (non-degraded) litter is worth $2,664 while degraded litter from our research piles varied from $2,856-$3,216.  The higher economic value of the degraded litter means that it can be transported greater distances than normal litter before the transport cost exceeds the litter value (i.e. break even distance).  For example, assuming a purchase cost of $15/ton litter, $24/ton for loading, unloading, and application, and transport cost of $0.16/ton/mile, the normal litter can be transported 398 miles while degraded litter can move 444 to 525 miles.  If all poultry litter from Eastern Oklahoma was stored using these degradation techniques, the increased economic benefit would be about 10 million dollars after five years and about 32 million dollars after 25 years, compared to transporting normal litter (Figure 3).

The higher nutrient density (P2O5 and K2O) of the degraded litter will also reduce application costs since less litter will be required to bring soil test phosphorus concentrations to agronomic optimum levels.  In addition, degraded litter was more uniform in particle size, darker in color, and had less offensive odors compared to normal poultry litter.

Poultry litter haulers and those receiving poultry litter will gain the most benefit from this process since haulers can transport more nutrients per load and the receivers need not purchase as much degraded litter as normal litter due to greater nutrient density. 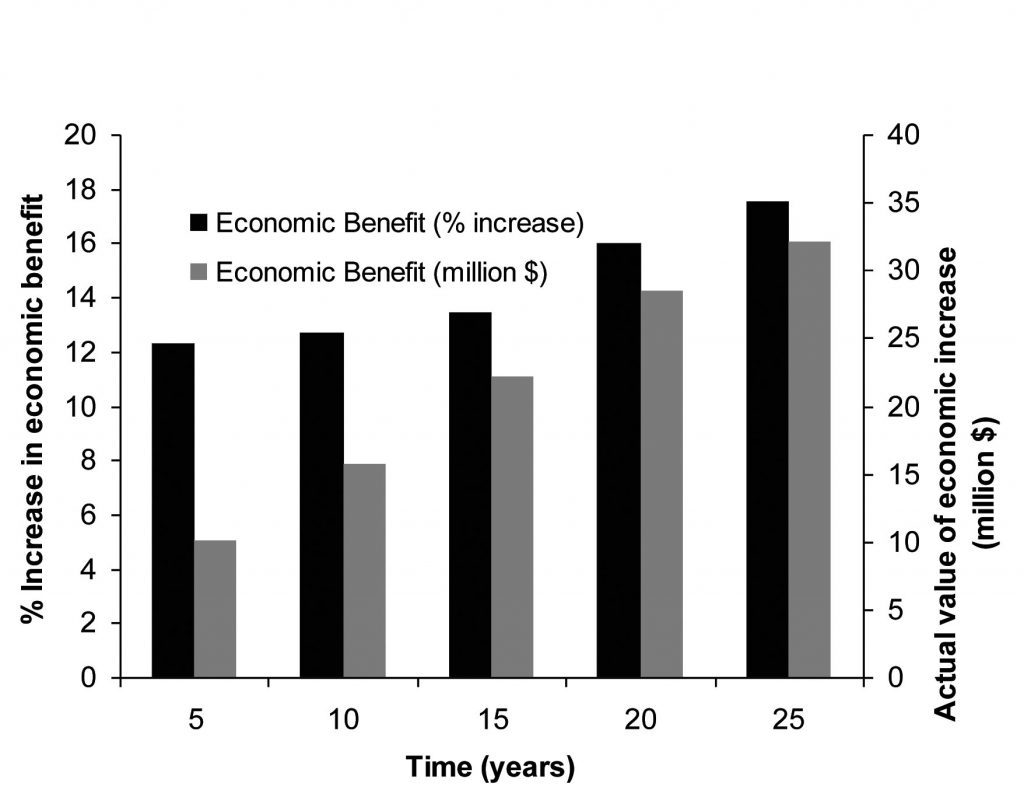 CornCropsFertilizationGrains & OilseedsIrrigationSoilWater
VIEW ALL
Back To Top
Back To Top
©