Application of anhydrous ammonia provides an opportunity to substantially improve the nutrient characteristics of these roughages.  Use of this technology has grown considerably in the past 15 years.  In general, a stack of roughage is covered with a polyethylene sheet to create an air and ammonia tight seal.  Anhydrous ammonia is injected into the stack and allowed to react with the roughage for one to four weeks.

When an abundance of moderate to high quality forage is available, there is little reason to consider ammoniation. Application of this technique will be most practical in years of drought, when little forage is available or when moderate to high quality forage is expensive. It is also beneficial in situations when there is some other incentive to bale low quality roughage. An example of this includes operations where the main objective is to grow a fescue seed crop. The fescue residue is often baled to remove the material from the soil surface in order to allow forage re-growth to occur. The ammoniation process serves to convert the residue by-product into a moderate quality roughage for cattle.

An Oklahoma study (Zorrilla-Rios et al., 1991) addressed the use of ammoniated wheat straw in emergency feeding programs for growing cattle. The wheat straw used in the study had initial crude protein and digestibility contents of 3.6 and 26% respectively. Steer calves (635 lb. initial weight) were fed untreated or ammoniated wheat straw and about 6.5 lbs. of corn. Increased amounts of soybean meal up to 1.23 lbs./day were fed with untreated straw; whereas, steers fed ammoniated straw did not receive any supplemental protein. Daily live weight gain of steers fed untreated straw and the highest level of soybean meal or ammoniated straw and no supplemental protein was about 1.0 lb. The increased crude protein of ammoniated straw decreased the need for supplemental protein by an amount equivalent to 1.25 lbs. of soybean meal/steer/day. This is often referred to as the protein-sparing effect of ammoniated roughages and is likely due to the increased intake of digestible dry matter (DM) and added crude protein of ammoniated roughages which increases microbial protein synthesis in the rumen.

Roughage digestibility and intake are enhanced beyond the improvements seen when a protein supplement is used to correct a protein deficiency in untreated roughage (Table 1). Replacing one pound of corn supplement with soybean meal resulted in a minimal improvement in weight gain (from 1.00 to 1.17 lbs./day) for steers receiving untreated hay. Ammoniation of the hay resulted in an average of 0.56 lb./day improvement in weight gain and an average of 21% greater hay intake. Similarly, gestating cows fed ammoniated wheat straw had a higher roughage intake and weight gain compared to cows fed wheat straw and supplemented with alfalfa hay as a protein source (Table 2).

Table 1. Effect of ammoniation of grass hay and supplementation on steer performancea

Table 2. Performance of gestating cows in a dry-lot, fed untreated wheat straw and 7 lbs. of alfalfa or ammoniated strawa

Mold and fungus cause heating and deterioration of hay and crop residue if roughage moisture content is above 20%. Ammonia, at a level of 1.5-2.0% of hay DM, acts as a fungicide and can effectively preserve roughages containing up to 30% moisture.

How does it work?

The term “anhydrous” in anhydrous ammonia refers to the absence of water. When the gaseous anhydrous ammonia comes in contact with roughage, it combines with the moisture (water) in the roughage to form ammonium hydroxide. Plant cell walls are made up of complex carbohydrates consisting of three primary compounds; cellulose, hemicellulose, and lignin. Ammonium hydroxide is an alkaline compound, much like lye soap, and serves to:

This reaction causes a swelling of the fiber and allows cellulase (the enzyme responsible for cellulose digestion) better access to the fiber for digestion (Church, 1988). Following ammoniation, most roughages have a darker caramel-like color and a softer texture.

What roughages can be ammoniated?

Any roughage that has low nutritive value is a good candidate for ammoniation. Table 3 shows examples of different roughages that have been ammoniated and the resulting changes in crude protein content, dry matter digestibility, and roughage intake.

a Adapted with modifications from Kuhl, Kansas State University, 1981.

1. Make certain there is a ready source of anhydrous ammonia available in your area. This can be a major limitation in areas where there is little farming.

2. In order to apply the appropriate amount of ammonia, it is important to make an accurate determination of roughage weight. Weigh at least five large bales (20 small bales) in order to get a good indication of average weight. Remember different types of roughages often have very different densities and bale weights. Also, estimate roughage moisture content because the amount of anhydrous ammonia applied is based on dry matter (DM). For example, 10% moisture content wheat straw has 90% DM which equates to 1800 lbs. of DM per ton of straw (2000 X .90).

3. Calculate the amount of anhydrous ammonia to be applied. Research has shown that between 2% and 3% ammonia on a roughage DM basis (60 lbs. per ton of DM) provides good results. Also consider how to regulate the total amount of ammonia applied. One option is to prepare the stack, calculate the total amount needed, and then place an order for a tank that contains no more than the amount needed. Application can also be monitored with ammonia regulators to aid in accurate application. Another alternative is to use the percentage gauge on the anhydrous ammonia tank to estimate the amount of ammonia that has been injected. For example, if capacity of an anhydrous tank is 5000 lbs., one percentage point on the tank gauge is 50 lbs. (5000 x 0.01). If the goal is to apply 1500 lbs., the percentage units change on the tank gage would be:

4. Arrange bales so that a single sheet of polyethylene (usually 40 X 100 ft.) can cover the entire stack with at least 2 ft. of surplus sheeting along all edges so the stack can be sealed. For large round bales, a pyramid three bales high with three forming the base or two bales high with four forming the base works well depending on bale size. It is not necessary to place polyethylene between the ground and hay because minimal ammonia will be lost through the ground during application and storage.

5. The ammonia can be applied through a hose or pipe extending from the tank under the plastic and terminating near the center of the stack. Placement of the end of the hose or pipe is not critical. Ammonia has excellent dispersion qualities and will rapidly penetrate all areas of the stack. If the hay is stacked on a slope, the ammonia should be injected at the higher end of the stack.

6. Cover the stack with a single sheet of polyethylene (6-mil or 8-mil thickness). Black polyethylene is recommended because it is more resistant to ultraviolet light deterioration than other colors. Be careful not to tear the polyethylene while covering the stack. All holes and tears must be repaired to prevent the loss of ammonia. To make the stack air tight, seal all edges of the polyethylene using at least eight inches of soil, fine rock or other weighty material. In addition to creating an air-tight seal, the soil around the base will also help to anchor the sheeting to prevent possible wind damage. 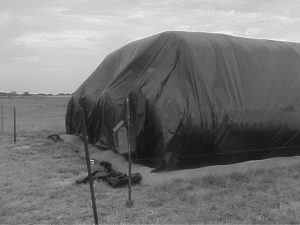 8. The length of time required for the stack to remain sealed depends on the environmental temperature as shown below:

Keep hay covered until a few days prior to feeding. Ammoniated hay takes on moisture more readily and is more susceptible to spoilage than untreated hay because the fiber has been partially broken down. Uncovering the stack two days prior to feeding will allow any excess ammonia to escape.

Ammoniation of moderate and high quality forages can cause toxicity in cattle!
Restrict ammoniation to mature, low quality roughages. Ammoniation of high quality roughages, such as alfalfa, forage sorghum, hybrid sudan, small grain hays, or any moderate to early harvested grass hay (including both cool and warm season species), can lead to toxicity problems known as “crazy cow syndrome” or “bovine bonkers.” Symptoms include hyperexcitability, circling, convulsions, and even death.
Toxicity is caused when cattle consume sufficient quantities of the toxic compound, 4-methylimidazole, which is formed when soluble sugars in the roughage react with ammonia. This compound passes through the milk to affect nursing calves, and in fact, nursing calves seem to be more susceptible to the toxicity than mature animals. Mature roughages have low soluble sugar content and represent little risk of toxicity problems.

To minimize the risk of toxicity:

To reduce the risk of calf toxicity, either refrain from feeding ammoniated roughage to cows with young calves or wait until the calves are at least one month old.

If toxicity does occur, immediately remove ammoniated roughages for several days and avoid working or exciting the cattle.

Exposure to anhydrous ammonia can cause blindness, lung damage, burns, or death. If you are exposed, immediately flush the exposed area with water for at least 15 minutes. Seek medical attention immediately after emergency first aid treatment.

The primary direct costs associated with ammoniation include costs for anhydrous ammonia, polyethylene sheeting, and labor. Table 4 gives an example of these costs.

Ammoniation generally costs $20 to $30 per ton of roughage. Larger stacks are cheaper to ammoniate per ton because labor, plastic, and miscellaneous costs are spread over more total pounds of roughage.

Table 4. Ammoniation costs for 105 round bales of mature prairie hay.a

Because many low quality roughages contain extremely low protein (less than 5%), and all of the added ammonia nitrogen from the ammoniation process is not available to the animal, additional natural protein supplementation may be needed to increase animal performance (Zorrilla-Rios et al., 1991; Beck et al., 1992). As a rule of thumb, consider the added crude protein only 50% available to the animal. For example, average protein content of wheat straw was 3.7% before ammoniation and 9.7% after ammoniation for several trials (Table 3.) Therefore, the added crude protein is 6% and the added usable protein is 3% (6% x .5). Usable crude protein should be considered to be 6.7% (3.7% + 3%). If the calculated usable crude protein content is above the animal’s requirement, additional protein supplementation would not be warranted.

What is the Value?

The value realized from ammoniating roughages of low nutritive value will depend on:

Ammoniation presents an opportunity to transform a product of little value into a valuable feed resource. Certainly, planning and good management are required to make this procedure successful, but the economic rewards can be significant.