A 19-year effort of selection and reselection lead to the release of Duster by Oklahoma State University in May of 2006. Breeders in the Pioneer hard red wheat breeding program made the initial cross for Duster and it became part of the OSU wheat breeding program when selected by Dr. Ed Smith from approximately 30,000 head rows donated by Pioneer in 1991.

In 1995, Dr. Bob Hunger identified single-plants that displayed leaf rust and soilborne mosaic virus resistance. Several other reselections during the next ten years led to the advanced line OK93P656H32992C04, which would eventually be released as Duster. Duster is marketed and sold by Oklahoma Genetics Inc. through a licensing agreement with OSU.

Duster has been a consistent top performer in OSU wheat variety tests (Table 1). Duster performs well in both grain-only and dual-purpose systems, and test weight of Duster has proven to be above average in OSU variety trials. Given Duster’s solid performance from central Oklahoma to the Panhandle, it is an excellent fit for all of Oklahoma and similar areas of the southern Great Plains. 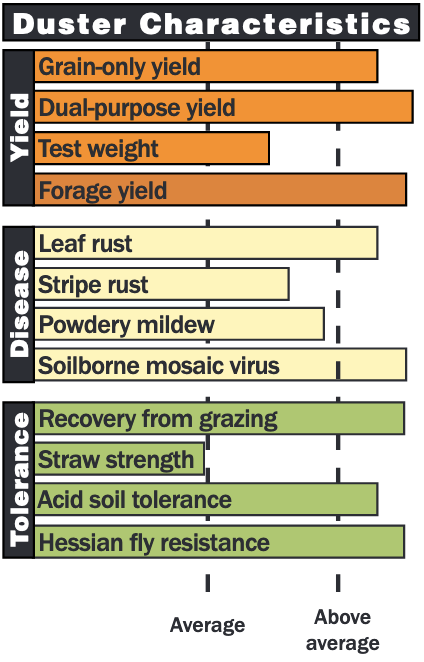 producers in the southern Great Plains. Duster has shown resistance to the Great Plains biotype of Hessian fly. This will be of particular benefit to producers wishing to sow early to maximize forage yield or those who no-till wheat after wheat.

Duster can perform well in grain-only production, but management is the key. Duster’s abundant tillering combined with intermediate straw strength can result in lodging some years. Therefore, lower seeding rates and later planting dates are recommended for Duster in grain-only systems. 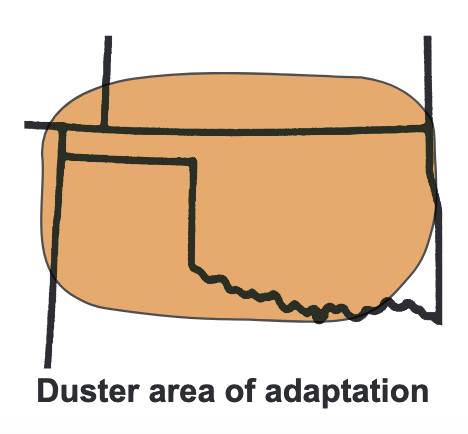 Acid soil tolerance, a good soilborne and foliar disease resistance package, and a good track record in breeder nurseries as well as state variety trials indicate Duster has wide adaptation to all areas of Oklahoma and similar areas of the southern Great Plains.