Oklahoma wheat farmers often need to change management strategies mid-season. Fields that were originally intended for harvest may need to be grazed out or harvested for hay. In these situations, awnless wheat varieties, such as Deliver, hold several advantages over their awned counterparts.

Deliver was released by the Oklahoma State University Wheat Improvement Team in 2004 to provide flexibility for dual-purpose wheat producers. Experimentally tested as OK98690, Deliver was the result of a cross between Yantar, a Bulgarian cultivar, as well as Chisholm and Karl. Deliver is PVP protected and can only be sold as a certified class of seed.

Yield potential of Deliver in most Northcentral Oklahoma 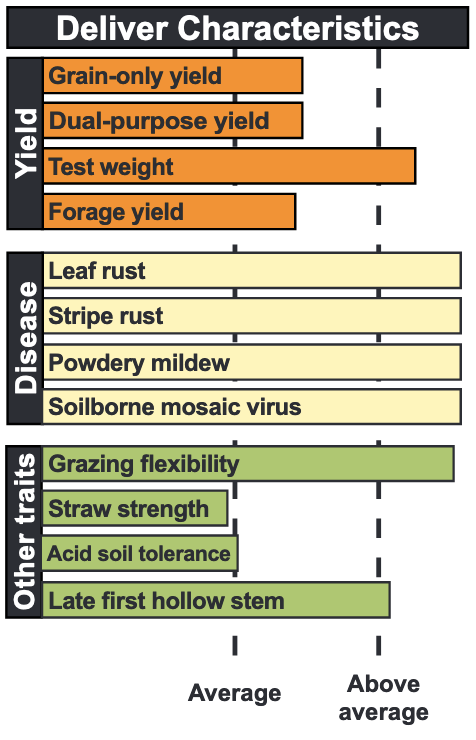 Previous attempts at awnless hard red winter wheat varieties have generally resulted in varieties that were very good at forage and hay production but lacking in test weight. Deliver breaks this mold by having very good test weight and good milling and baking characteristics.

Deliver is a true tri-purpose wheat variety in that it fits well in a grain only, dual-purpose, or graze-out system. Growers who have to make management decisions mid season due to changing market conditions will appreciate the flexibility that the awnless trait provides.

Deliver is intermediate in plant height and is about the same height as 2174. Heading date is comparable to 2174 and Ok102 but a few days later than Ok101 and Jagger. It is moderately susceptible to lodging similar to Jagger and Cutter. Deliver is not well adapted to critically low soil pH.

Deliver has a very strong foliar disease resistance package. Deliver is resistant to leaf rust (in adult plants), stripe rust, and wheat soilborne mosaic and moderately resistant to septoria leaf and glume blotch. It is moderately susceptible to tan spot and wheat streak mosaic virus. Kernel size has been large and consistent (determined by the weight of kernels retained on a No. 7 screen).

Acid soil tolerance is not one of Deliver’s strong points.

Yield of Deliver can be negatively impacted when sown into soils with a pH below 5.5. Therefore, it is very important to have a current soil test and know the fertility characteristics of your soil prior to sowing Deliver.

The primary production area for Deliver is Northcentral Oklahoma with a secondary area extending into Southwest Oklahoma. It is late to first hollow stem but medium in overall plant maturity. Straw strength of Deliver is moderate, so it should be actively managed to ensure that lodging does not occur, especially in high-yielding environments.