Billings was one of 14 head rows selected from a cross between two experimental lines in 1996. Both experimental lines contained significant Eastern European germplasm. To have this number of head rows make it through the initial culling process is unusual and speaks to the strength of the lines resulting from this initial cross. 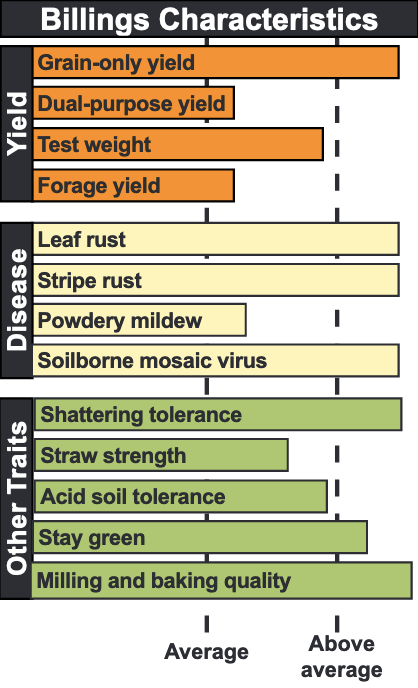 Billings was first tested in the OSU wheat variety testing program in 2003 as the experimental line OK03522. The grain-only yield potential of this experimental line quickly made it a standout and Billings was released as a variety in 2009. Billings is marketed and sold by Oklahoma Genetics Inc. through a licensing agreement with OSU.

Billings has shown good yield potential in its area of adaptation and can serve well as a disease-resistant, acid-soil-tolerant replacement for Jagger or OK Bullet in this area (Table 1). Billings especially shines in environments with high yield potential, and data indicate the higher the yield potential of the environment, the greater the advantage for Billings. 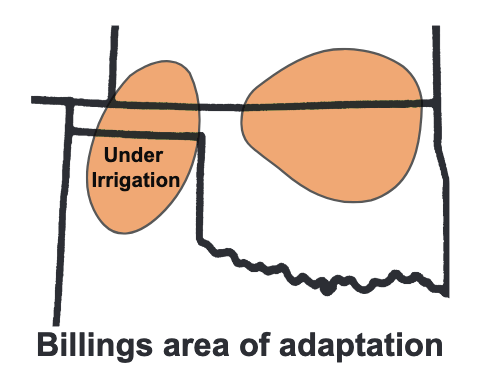 Spring weather patterns in north central Oklahoma can be unpredictable and harvest is sometimes delayed. The strong shattering tolerance of Billings will assist in ensuring the grain winds up in the combine and not on the ground in these situations.

A larger-than-average kernel size makes Billings an aesthetically pleasing wheat post-harvest. Billings has delivered average protein content but has score well above average for other milling and baking quality parameters.

Billings shines in grain-only systems in Northcentral Oklahoma and Southcentral Kansas. Irrigation will allow Billings to move west into grain-only systems in the Panhandle. Resistance to current strains of leaf and stripe rust and good stay-green mean that Billings will perform well in environments where foliar disease is a major yield-limiting factor. Test weight of Billings has been above average in OSU variety performance tests. While Billings shines in grain-only systems, it does not perform as well in dual-purpose systems. Variety tests have shown that forage production of Billings is average, but recovery from grazing is not as good as other Oklahoma-bred wheats, such as Duster or Endurance.