The fundamental effects of fire influence the community, structure and composition of plants and animals in the environment. Many species of plants have adapted to periodic occurrences fire, and many depend on fire for their continued existence. The suppression of naturally occurring fire has changed fire-adapted ecosystems often leads to a large buildup of fuels, which results in an increased risk of catastrophic fires.

OSU fire ecology scientists study the ecological and historical role of fire and the fire effects on plants and animals in the environment. Scientists and educators involved in OSU's fire ecology program work to help landowners make better management decisions in order to help restore and conserve ecosystems through the use of controlled burns.

Patch burning benefits all aspects of a prescribed burning program. The major benefit of patch burning is the additional accumulation of fine fuel, which is readily achieved without any deferment of grazing before or after burning. With larger amounts of fine fuel, burns can be conducted under safer weather conditions, including lower air temperature and higher relative humidity. With greater amounts and more continuous fine fuel loads, fires can be more intense, which results in better suppression of woody plants. We have observed numerous large eastern redcedar trees killed with fire in patch burned pastures that had escaped several previous prescribed burns under traditional management (continuous grazing with a 3-year fire-return-interval).

Patch burning allows prescribed fires to be conducted at different times of the year, 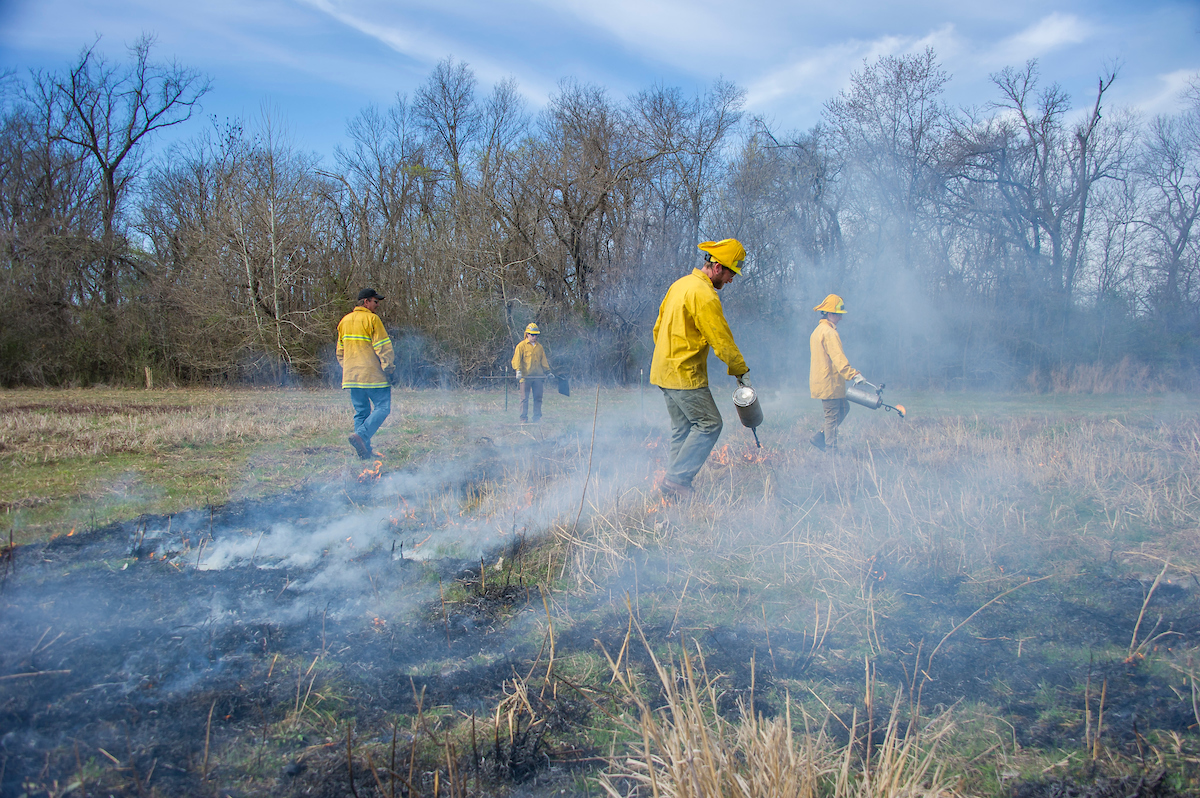 which can spread out the burn season and provide more time to conduct fires. Days with adequate weather conditions are limited during traditional burning seasons, which cause burn bosses to push the edge of safety by burning on days with marginal weather conditions, or not to conduct burns at all. Therefore, a manager whose objective is a 3-year fire-return-interval often is unable to achieve the objective with traditional management practices because of limited available burn days within prescription.

Another benefit of patch burning is that fires can be allowed to burn into previously burned areas making prescribed burns safer and easier to conduct. The previously burned and grazed patches contain insufficient fine fuel available to carry a fire. We recommend planning prescribed burns to utilize these pre-burned areas as firebreaks as much as possible.

Because patch burning reduces the size of the burn unit, burning smaller units can make the prescribed fire operation less complicated and costly. It may require fewer personnel and less equipment to conduct the burn than when an entire pasture is burned. Burning smaller units produces less smoke and minimizes smoke management issues. The amount of time spent patrolling the fireline and in post burn mop-up is also reduced.