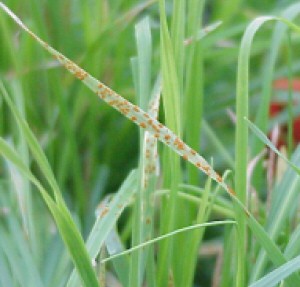 Spores produced by P. recondita f. sp. tritici appear in pustules formed on wheat foliage in the fall or spring. Pustules are small round lesions that contain bright orange-colored spores (called urediospores or urediniospores). Some chlorosis (yellowing) or necrosis (flecks of dead tissue) also can be associated with this disease. As wheat nears maturity in the late May or June, the orange-colored spores are replaced with dark-grey to black spores, which are called teliospores.

Planting wheat varieties resistant to leaf rust is the most effective and economical way to control wheat leaf rust. However, the pathogen that causes this disease is highly variable and can frequently adapt to and overcome the genetic resistance bred into wheat varieties. Therefore, be sure to ascertain the current reaction of wheat varieties to leaf rust before planting in the fall. Potential sources of this information include your seed dealer, extension personnel, and extension literature [for example, "Wheat Variety Comparisons Chart, 1997," Production Technology - Crops, July, 1997, vol. 9, no. 17 (revised)].

Fungicides are available to control leaf rust. Consult your county extension agent or the current edition of the OSU Extension Agents’ Handbook of Insect, Plant Disease, and Weed Control for currently registered fungicides. If a highly susceptible variety was planted, leaf rust is severe on leaves below the flag leaf, conditions are favorable for continued leaf rust development, the yield potential of the field is high (more than 35 bu/ac), and the price of wheat is high ($3.50/bu), then applying a fungicide to limit losses from leaf rust should be considered.