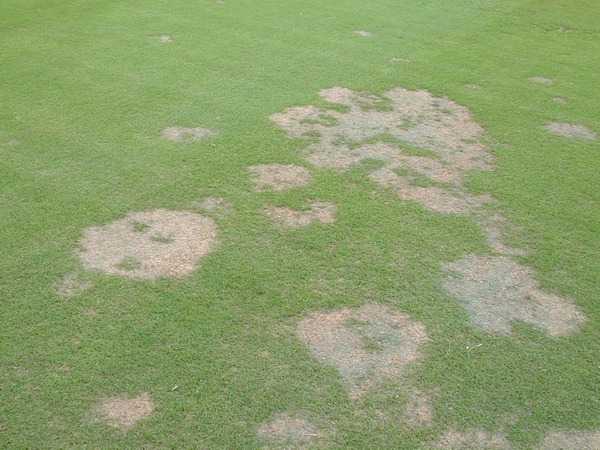 Diseased areas are identified as circular dead patches of bermudagrass ranging from 3 inches to several feet in diameter. The circular areas can overlap to envelop a much larger area. Weeds such as crabgrass may begin to grow in the dead areas. The causal fungus of spring dead spot attacks the roots, crowns, stolons, and rhizomes of susceptible bermudagrasses in the fall of the year and again in spring, even though symptoms of infection cannot be seen from above. During these times, the fungus spreads radially through the soil, producing circular patches of infected grass. Infection in the fall is most devastating, since it is believed that the injury caused by the fungus at this time predisposes the bermudagrass to winter-kill. The dead plants do not green up in spring, producing the symptoms of the disease. The dark hair-like filaments (runner hypae) of the causal fungus occasionally can be seen on stolons, rhizomes, and roots in the spring of the year, both within and slightly outside the dead patches of grass.

Managing for prevention and recovery - Severity of spring dead spot can be reduced, though not necessarily cured, through proper turfgrass management. The rapid rate of spread of most bermudagrasses usually provides for complete recovery of the area if it is properly managed.

Cleanup and Re-establishment - With no intervention, bermudagrass will often grow over the dead patches by late summer. However, recovery can be sped up by raking debris from the patches which allows stolons growing in from the sides to root more easily.

Core Aerification and Dethatching - Core aerification of compacted sites may help to reduce the severity of the disease by providing improved root growth and thus a more healthy turf. Dethatch if thatch, when measured during the summer period, exceeds 1/2 inch in thickness. Dethatching is best performed in late winter, prior to the greenup of bermudagrass and prior to application of pre-emergent herbicides.

Grade and drainage - When necessary, fill or tile low areas to aid in surface and subsurface drainage. A uniform 2% slope will usually aid in providing good surface drainage. If adding soil, use a soil similar in physical characteristics to the existing top soil to avoid creating layering problems.

Fertility - Adequate fertility is crucial to the development of a high quality stand of bermudagrass and recovery from spring dead spot.

Maintain healthy turf - Try to avoid any unnecessary management practices that may further predispose bermudagrass to this disease.