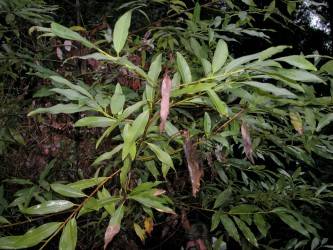 Sudden Oak Death is a recently recognized disease that is killing oaks and other plant species in the western U.S. First noticed in 1995, the disease has been confirmed in the coastal areas north and south of San Francisco, and in a relatively remote location in southwestern Oregon. The pathogen responsible for the disease, a fungus-like organism called Phytophthora ramorum, is also found in Germany and Denmark, where it is causing a recently identified disease on Rhododendron and Viburnum. In the western U.S. tens of thousands of tanoaks (Lithocarpus densiflorus), coast live oaks (Quercus agrifolia), and California black oaks (Quercus kelloggii) have been killed by the fungus. On these hosts, the fungus causes a bleeding canker on the stem. The pathogen also infects huckleberry (Vaccinium ovatum), bay laurel (Umbellularia californica), madrone (Arbutus menziesii), bigleaf maple (Acer macrophyllum), manzanita (Arctostaphylos manzanita), and California buckeye (Aesculus californica). On these hosts the fungus causes leaf spot and twig dieback. 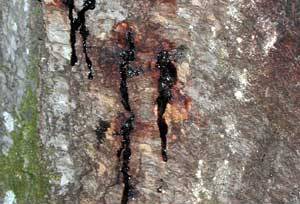 The pathogen has the potential to infect oaks and other trees and shrubs elsewhere in the United States. Limited tests show that many oaks are susceptible to the fungus, including northern red oak and pin oak, which are highly susceptible.

On oaks and tanoak, cankers are formed on the stems. Cankered trees may survive for one to several years, but once crown dieback begins, leaves turn from green to pale yellow to brown within a few weeks. A black or reddish ooze often bleeds from the cankers, staining the surface of the bark and the lichens that grow on it. Bleeding ooze may be difficult to see if it has dried or has been washed off by rain, although remnant dark staining is usually present. 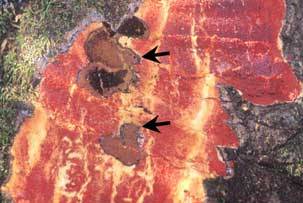 Necrotic bark tissues surrounded by black zone lines are usually present under affected bark. Because these symptoms can also be caused by other Phytophthora species, laboratory tests must be done to confirm pathogen identity.

In the United States, sudden oak death is known to occur only along the west coast. However, the fact that widely traded rhododendron ornamentals can be infected with the pathogen and the demonstrated susceptibility of some important eastern oaks make introduction to eastern hardwood forests a significant risk.