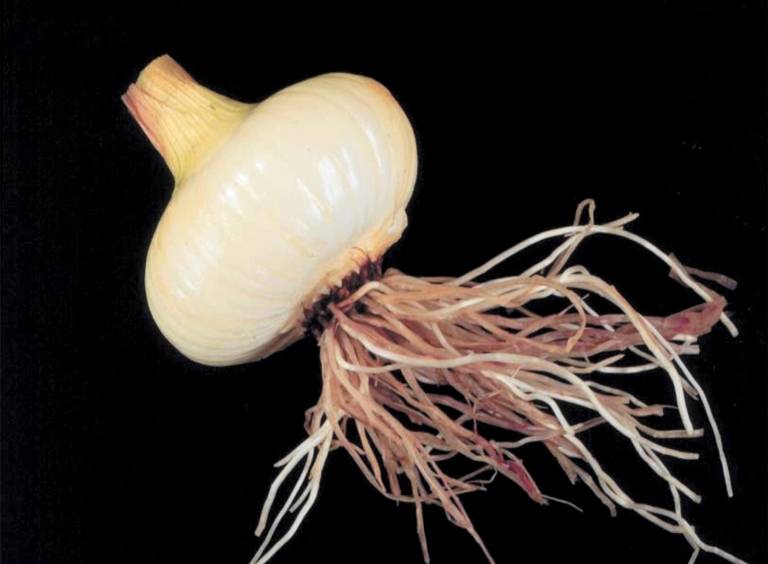 Phoma terrestris, however Fusarium species can also cause pink discoloration of older roots.

Primarily onions, but garlic is occasionally affected. Other grassy plants including cereals, corn, and grasses can serve as reservoir hosts. The pathogen can occasionally infect weak roots of other vegetable crops including carrot, cucumber, pea, pepper, squash, tomato and more. 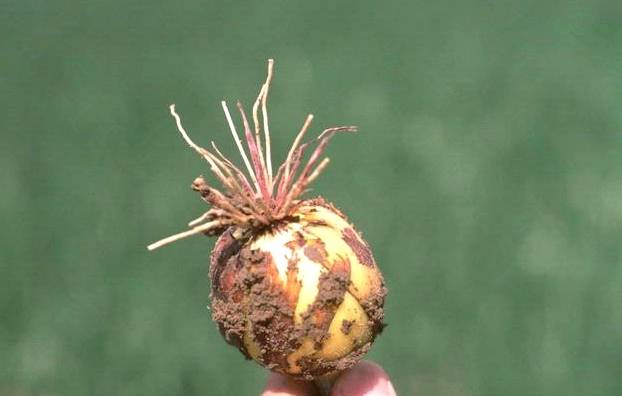 The most obvious symptom is the appearance of pink colored roots. Often this symptom is observed early in the season on onion sets at local garden centers. The infected roots will discolor from pink to red to purple. Roots often shrivel and die. The problem may extend up the roots into the bulb. Plants are often visibly stunted and leaf dieback may occur. Plants do not generally die from the disease, but the bulb may be internally discolored or rotted. Often secondary organisms will enter the damaged areas and increase the level of decay.

When possible, start onions from seed. If onion sets are purchased, avoid any boxes with evidence of mold or pink color on the roots. Maintain good crop practices including weed and insect management, adequate watering and proper fertility. If disease is observed, immediately remove the affected plant(s) and as much associated soil as possible. Do not plant onions or other grassy hosts in the same site for at least 5 years. Soil solarization is an effective method of reducing disease. Disease resistant varieties seldom available in Oklahoma. The popular onion variety 'Candy' has fair resistance to pink root. Chemical control methods are largely ineffective.