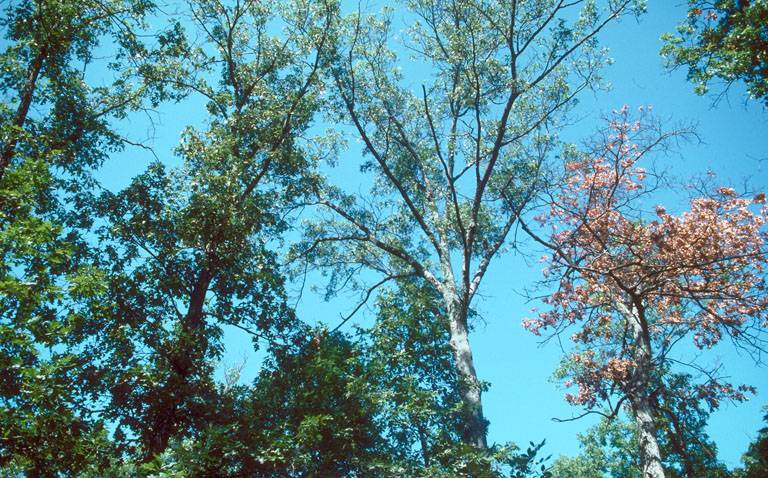 Periodic occurrences of decline and death of oaks over widespread areas have been recorded since 1900. These outbreaks, variously named oak decline, oak dieback, or oak mortality, are caused by a complex interaction of environmental stresses and pests and given the name oak decline. Although the most frequent outbreaks of oak decline have been in southern New England, the Middle Atlantic States, and the Southeastern States, the disease has occurred throughout the range of oak in both forest and urban situations. It is not limited to any one species or species group. Outbreaks have been most frequent and severe among red (Quercus rubra), scarlet (Q. coccinea), pin (Q. palustris), and black oak (Q. velutina) in the red oak group and among white (Q. alba) and chestnut oak (Q. prinus) in the white oak group.

Trees are weakened by environmental stresses such as drought, waterlogging, or frost or by pests such as defoliating or sucking insects. Weakened trees are then invaded and killed by insects and diseases that cannot successfully attack healthy trees. Usually the progression of decline is slow, occurring over several years.

Trees affected by oak decline show a general and progressive dying back from the tips of the branches. Other symptoms include production of chlorotic, dwarfed, and sparse foliage; development of sprouts on main branches and stem; and premature autumn leaf color and leaf drop. Often, growth is reduced before the appearance of symptoms. The amount of food stored as starch is reduced, especially in the roots.

The initiating stress factors associated most frequently with oak decline are drought, frost injury, or insect defoliation. Trees on ridge tops and in wet areas suffer most severely from drought. Frost often affects trees growing in valleys and frost pockets. Defoliated trees that refoliate the same season may exhibit dieback symptoms the next year. Other factors such as leaf diseases and soils that are waterlogged, compacted, or shallow have occasionally been implicated in oak decline. Waterlogging is especially important in the heavier clay soils of the Midwest. Stress factors may be more frequent and severe in urban forests, where trees are often subjected to disturbances associated with human activities.

These stress factors often weaken trees so much that they succumb, sometimes suddenly, to the root killing and girdling actions of insects and diseases. The two major pests associated with oak decline are Armillaria mellea (Vahl: Fr.), a root disease commonly called armillaria root rot, and Agrilus bilineatus (Weber), the twolined chestnut borer.