Young larvae feed in groups on the undersides of the leaves. After a few days of aggregated feeding they separate and feed alone. They typically skeletonize the leaves and when the damaged leaf dries, it tatters in the wind, breaking off and leaving only the main vein. Adults also feed on the leaves. First generation damage can be serious on ornamental willows but is not of much concern on wild trees. Later generations seem to cause very little damage. 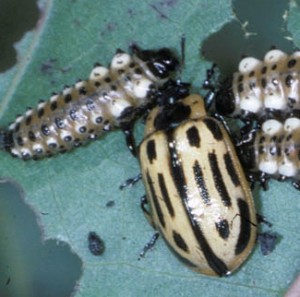 The adults overwinter under bark, litter, or debris under or near trees. They begin to emerge in late March or early April and egg laying is underway by mid-April. Larvae feed on willow leaves in late April and May. The larvae have a row of glands down each side of the body that produce a foul-smelling milky fluid. When a larva is disturbed, it emits a droplet of this fluid from each gland. Predators rarely attack these larvae, and it is assumed that they are repelled by the odor. Pupation is underway by late May with the pupae hanging head downward from the leaves. New adults are emerging by early June. Several other generations occur during the summer and fall but seldom cause much damage. There appear to be three or four generations per year in Oklahoma.

The cottonwood leaf beetle adult is a somewhat flattened, red or red orange beetle and is about 3/8 inch long. There are six large black spots, which tend to run together, on each wingcover. The thorax is black with broad, red orange outer margins. Mature larvae are gray with several rows of black spots running down the body. The head and legs are black. Small larvae are entirely black. The willow leaf beetle adults are between 1/8" and 1/4" long, oval, and shiny black to greenish blue. Larvae are black and about 1/4" long at maturity.