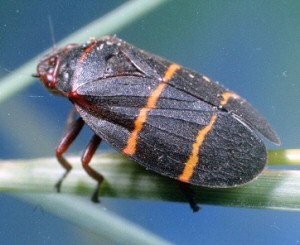 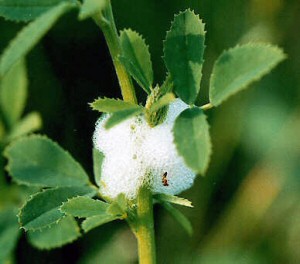 In Oklahoma, damage is most common on redbud in mid and late June. Large numbers of adults sucking sap from the leaves and small branches causes wilting and twig dieback. Damage to holly has been reported in other areas. Feeding on young or immature leaves may result in distortion, stunting, discoloration, or necrosis at the site of stylet penetration. Nymphs have been reported to cause serious problems on turf grasses in the Gulf Coast states but this type of damage has not been recognized in Oklahoma.

Twolined spittlebugs overwinter as eggs in hollow stems, behind leaf sheaths, or among plant debris. Nymphs hatch in the spring, seek sheltered, humid, hiding places among plants, and begin feeding. Soon they exude a white, frothy "spittle" mass which protects them from natural enemies and desiccation. Nymphs feed for at least a month and develop through four instars before becoming adults. Adults live about three weeks and the females spend the last two weeks of this period depositing eggs. Hatching occurs about two weeks later. There are probably 2 generations/year in Oklahoma.

This insect has dark brownish black wings crossed by two orange lines. The thorax is also dark and crossed by a thin orange line. The head and underside is reddish. They are about 3/8 inch long.