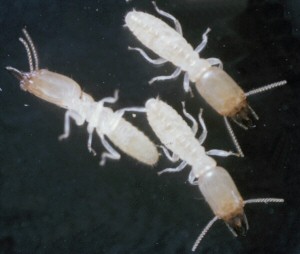 Typical signs of termite infestations include swarming of winged adults in the spring and occasionally fall, mud tubes 1/ 4 to 1/2 inch wide constructed over the surface of foundation walls, mud protruding from cracks between boards and beams, and hollow sounds from infested wood when it is tapped or extreme softness when probed with a knife. Sometimes you will actually observe termite workers and/or soldiers when damaged wood is probed. Termites feed slowly and there is no need to panic. 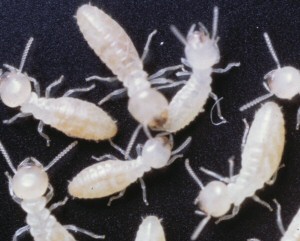 In a typical termite colony, the king and queen are the only active reproductives; they perform no other function. They are fed by the other termites, and some have lived up to 25 years. A mature queen can lay thousands of eggs each year. During the two-week incubation period, eggs are tended to by the worker termites. The nymph hatches directly from the egg. Attendants feed nymphs regurgitated food for the first two weeks, enabling them through molting to become workers, soldiers, reproductives or supplementary reproductives (depending on the needs of the colony). As the reproductive nymph matures, its body lengthens and sexual organs develop. The body turns black, eyes become functional and wings extend twice its body length. Supplementary reproductives ensure the life of the colony should it lose the king and queen. They may start new colonies by migrating from the established colony. The worker termite has no eyes and is sterile. Its main function is to provide the colony with food, usually obtained by eating the wood of building structures or other available cellulose sources (such as tree stumps, paper, etc.). Thus it is the workers that do the actual damage to buildings. The soldier nymph develops a long, armored head and large jaws during its last molt. The sole purpose of the soldier is to defend the colony against enemies such as ants. All mature reproductives leave the colony at the same time (usually mid-morning to mid-afternoon) on warm spring and sometimes fall days (although in Oklahoma, swarmers have been recorded from every month of the year). Swarmers are poor fliers and when above ground usually flutter a few yards and fall. After falling to the ground, they chew or pry off their wings. Finding the discarded wings in window sills, air/heat ducts, or other areas around a structure is another indication of a possible termite infestation. Surviving males find compatible mates and construct a nest in wood which is usually in contact with the soil to become king and queen. These termites live in nests underground and tunnel up for food, which may be in the wood structure of homes. 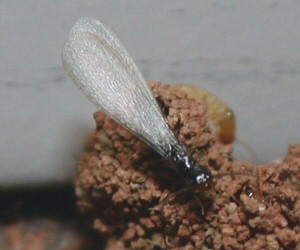 Subterranean termites are social insects that live in nests or colonies in the soil. Each colony consists of three forms or castes: reproductives, workers and soldiers. Reproductives can be winged (primary) or wingless (secondary). The adults or reproductives do no direct damage to wooden structures. The primary reproductive (swarmer) is coal black to pale yellow-brown, about 1/4 to 3/8 inch long, with pale or smoke gray to brown wings. Secondary reproductives are white to cream-colored with short wing buds. Termite workers are wingless, white to grayish-white and about 1/4 to 3/8 inch long. Soldiers resemble workers except that they have large, well-developed brownish heads with strong mandibles. Adult swarmers have straight bead-like antennae and a thick waist, with both pairs of wings of similar size often easily detached. Adult ants differ in that they have elbowed antennae and constricted waists. The forewings are much larger than the rear wings and are not easily detached. 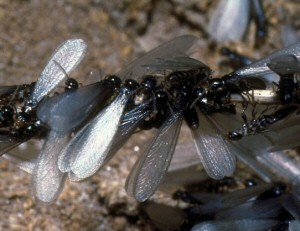