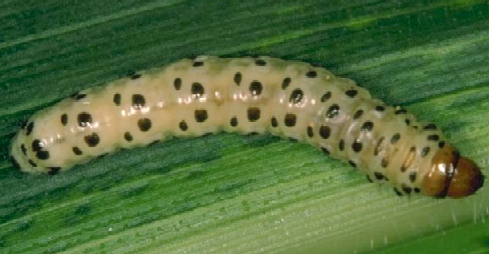 Primarily a pest of corn but also attacks sorghum and other grasses.

Infested plants have ragged, broken and dangling leaves with many holes which were fed upon by the larvae when the leaves were curled in the heart of the plant. The worms also bore up and down the pith of the stalk and may cause the plants to lodge. Plants attacked by borers are twisted and stunted. These insects may reduce yields of corn and sorghum 15 to 50 percent.

The corn borer passes the winter as a full-grown larva in the taproots of the old corn or sorghum stalks. It changes to a pupa inside the stalk during early spring and emerges as an adult a few weeks later. The moth deposits flattened, whitish, oval eggs in small groups on the underside of leaves in an overlapping shingle fashion. The egg hatches within a few days, and the young worm feeds first upon the leaves but soon bores into the pith of the stalk. A larva may feed on several stalks. There are one to three generations annually.

The full-grown larva is about 1 inch long. During the growing season, this caterpillar has a white abdomen with 8 conspicuous dark brown or black spots. It is similar in appearance to the European corn borer, but the latter has lighter spots on a browner background. During the winter the southwestern corn borer becomes pale yellow with very faint spots.