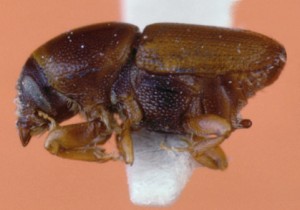 This species breeds in all species of elms and the related Japanese zelkova, but Dutch elm disease is primarily a problem in American elm. 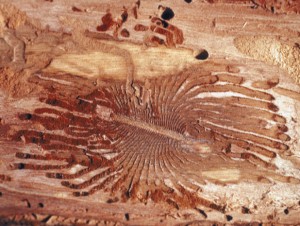 Adult feeding can cause small twigs to fall from the trees. Larval feeding may hasten the death of a tree but they seldom are found in a tree unless it is already in bad condition. Most of the damage is caused by the spread of Dutch elm disease which can kill even healthy, mature American elm trees.

Adult beetles pick up the spores of Dutch elm disease as they live in diseased elm wood. Beetles emerge from under the bark of dead or dying elms in the spring and move to and feed on tender bark in twig crotches. Feeding injuries are most numerous in twig crotches near the outside crown of the tree. The beetles that emerge from late April to the first of July (overwintering and first generation adults) are the ones most likely to vector the disease to healthy elm trees. At this time, the long vessels of the elm's spring wood are open and functioning. Beetle feeding will cut into these vessels and they can introduce Dutch elm disease spores. The vessels that are produced later in the year are shorter and the movement of materials throughout the tree will be slower. Dutch elm disease transmission in most likely if beetles feed in one year old or older twig crotches in spring or early summer.

After feeding the adults tunnel into the inner bark of weakened, dying, or recently dead elm trees. They lay their eggs in galleries which are parallel with the grain of the wood. The larvae hatch and feed in the layer under the bark of the tree. The life cycle may be completed in 35 to 40 days. The spring-flying adults produce a generation that emerges in June. These first generation adults also feed in twig crotches and can transmit Dutch elm disease. They then produce a second generation of larvae. Many of these larvae enter a developmental diapause and overwinter, but a portion continues to develop and begin to emerge in August. These adults produce a partial third generation. Second and third generation adults also feed in twig crotches but usually do not transmit Dutch elm disease since the trees are not as susceptible at this time. Due to overlapping of generations, adults may be present almost continuously from April to October.

The adult beetle is dark reddish brown, shiny, and about 1/ 8 inch long. The underside of the rear end of the body is concave, with a noticeable projection or spine pointing toward the rear. Larvae are small, white, and grub-like and are found under the bark of dying or dead elms. The egg galleries are parallel with the grain of the wood and the larvae feed across the grain. Another bark beetle that might be found in elms in Oklahoma is the native elm bark beetle [Hylurgopinus rufipes (Eichhoff)]. It is dull brownish black and less than 1/8 inch long. It does not have the concave outline and the spine near the rear of the body. Their egg galleries extend across the grain of the wood and the larvae feed parallel to the grain.