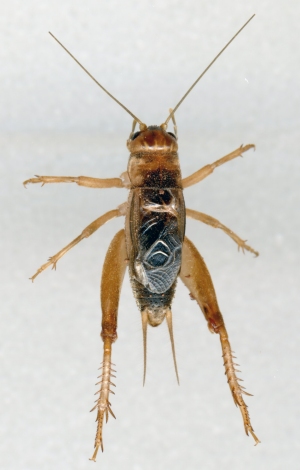 These crickets feed on grasses, weeds, and pine seedlings. Their damage to turfgrasses by feeding is apparently negligible.

These crickets are similar to field crickets except for the short ovipositor from which they get their name shorttailed. They are light brown in color with a body length of about 3/4 inch. They shed the hindwings soon after becoming adults and never fly. Nymphs are smaller than adults, light brown in color, and lack wings.

Shorttailed crickets overwinter as nymphs in burrows in the soil. After several molts in early spring, they reach the adult stage. Mated females begin to lay eggs in late spring or early summer. Hatching takes place in a multi-chambered burrow constructed by the adult. For a short period of time, both eggs and nymphs may be found in the burrow. Between the fourth and sixth instars, nymphs leave the parent burrows and construct burrows of their own. At first the burrows are small, but as the crickets mature the burrows are enlarged and may reach depths of 12 to 20 inches. Only one cricket is found per burrow except for the time when certain burrows contain eggs and nymphs. There is one generation per year.

In turf, burrows constructed by the nymphs and adults result in unsightly mounds of small soil pellets which may smother the surrounding grass. In Oklahoma, they are seldom noticed until the maturing nymphs begin to construct new burrows in the late summer. This is usually sometime in August and activity continues through October and, in some years, through most of November. The burrows are rebuilt each time they are washed away by fall rains.

Look for mounds of small soil pellets or soil deposits similar to crayfish activity. Treatment provides only partial control and is seldom needed unless large numbers of mounds are encountered. If treatment is attempted, the chemicals suggested for white grubs and other soil insects could be used. Please contact your local county extension office for current information.