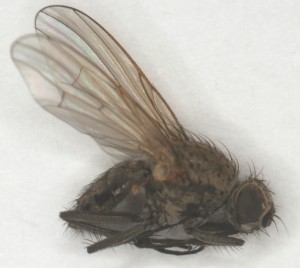 Although it feeds primarily on decaying organic matter, the seedcorn maggot infests seeds and/or roots of nearly 50 kinds of plants. In Oklahoma, damage is most commonly seen in com, beans, and peas in April (ranges from late March to early May). Larvae also damage spinach foliage by feeding on the terminal buds of overwintered plants in late fall and early spring. 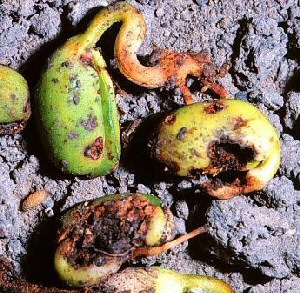 Seedcorn maggots damage newly planted seeds by feeding on seed contents often leaving empty shells and resulting in poor germination. Seedlings which do emerge are tall and spindly with few leaves. They rarely mature or mature late because of poor seed quality. Occasionally, seedcorn maggots tunnel in seedling roots or stems. Either type of feeding allows entry of disease causing organisms. Damage is most likely in cold, wet springs and on land high in organic matter. Damage to spinach is by feeding in the terminal leaf clusters. Feeding is often followed in 2 or 3 days by invasion of decay organisms which cause a black discoloration of the leaves. Plants are seldom killed but suffer moderate to serious reduction in weight and are often rendered unfit for use because of quality impairment and contamination. 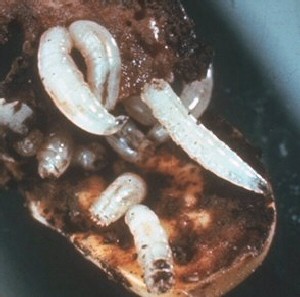 The seedcorn maggot overwinters as a pupa in the soil. The adults emerge in early spring and feed on nectar and honeydew for a variable period of time. After feeding, each fertilized female begins laying an average of 270 eggs, singly or in small clusters, in moist soil. Freshly disturbed soil, fields with decaying seed or crop remnants, and organically fertilized soils are all attractive to ovipositing females. Eggs hatch in 7 to 9 days and larvae feed in seeds or decaying vegetable matter. They remain active at temperatures as low as 40 F. After feeding for 1 to 3 weeks, the larvae burrow deeper into the soil to pupate. Pupation may last 7 to 26 days or all winter. There are 3 to 5 generations per year. Spring and fall generations are the most abundant and destructive. During summer, only a limited number of adults survive. Trapping records in Oklahoma show adults are active primarily from February to early June and from early September to early December.

The adult is a small, gray fly with black legs and scattered bristles on its body. It is less than 1/4 inch long. The larva is a typical fly maggot; legless and tough skinned with a pointed head and a rounded tail. It is white to yellowish white and about 1/4 inch long when mature. Both adults and larvae are almost Identical to those of the onion maggot.