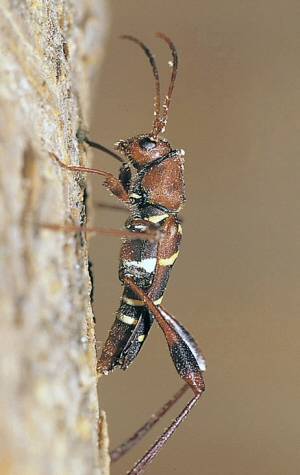 Redheaded ash borers will attack nearly all dying and dead hardwoods, but chiefly ash, oak, hickory, persimmon, and hackberry. Unseasoned logs of ash, oak, and hickory with the bark intact are especially subject to heavy attack. The banded ash borer is recorded from ash, hickory, elm, and mesquite. In the Eastern United States, it commonly breeds in ash logs.

Both species breed primarily in dying or recently cut trees. Therefore, most of their damage is to wood cut for lumber or firewood. Both species often emerge from firewood brought into homes in the late winter or early spring. They cause no damage in homes but are a nuisance pest. The redheaded ash borer will attack weakened or newly planted living trees and is a pest in young nursery stock in the North Central states. The larvae work in the inner bark and summer wood, cutting off the flow of sap. In young trees, burrows may extend both horizontally and vertically through the trunk, making it subject to breakage during high winds. 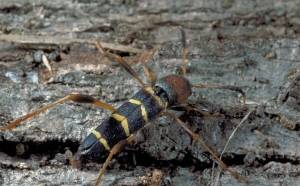 The redheaded ash borer overwinters in the trunk of infested trees, probably in the pupal stage. Adults emerge early in the spring and deposit eggs beneath the bark of dead, unseasoned wood. The larvae feed first beneath the bark then tunnel into the sapwood and often reduce it to powder. There are probably two or three generations per year in Oklahoma. Banded ash borer adults emerge in the early spring and deposit eggs in the crevices of bark. Ash logs cut during the winter are especially subject to attack. The larvae feed for a while under the bark and then bore into the sapwood where they feed for the remainder of the summer. Pupation occurs in the fall, but the adult does not emerge until the following spring. There is usually one generation per year; however, if the infested material is sawed, stored, and dried out, the life cycle may require several years.

The adult ranges from 1/2 to 5/8 inch long. The head and thorax are reddish; the body is light brown with the apical part of the elytra sometimes much darker. The elytra are marked with four transverse bands of fine yellow hairs and the middle and hind legs are long and reddish. The antennae are about half as long as the body. The larvae are cream-colored, fleshy, legless grubs. A closely related species, N. caprea, is known as the banded ash borer. Adults are dark brown to almost black and about 1/2 inch long. There is a line of fine, white or yellowish hairs on the thorax and four bands of the same material and color across the elytra. The first two bands meet, almost forming circles.