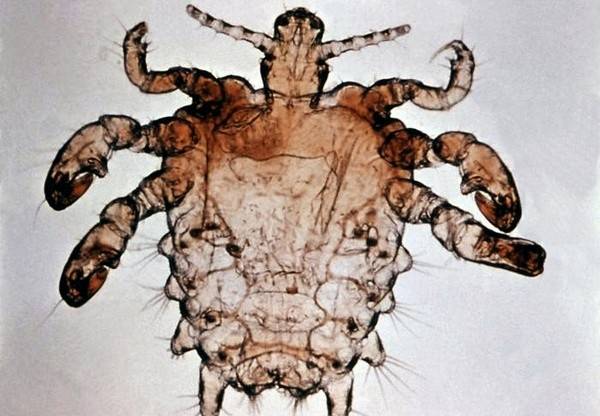 Crab or pubic lice lay their eggs on coarse body hair, particularly the hair associated with the pubic regions, perianal region, thighs, abdomen, and armpits, but they will also infest a person's beard and eyelashes. These lice are much less mobile than head or body lice, they can remain attached with their mouthparts in the skin for days at a time. Pubic lice are typically found only on humans and are most often transmitted directly from person to person, particularly during sexual contact. When crab lice feed they can inject saliva into the host, causing pruritus and itching. Scratching the area can increase the irritation. The area can become scaly and hardened with oozing lesions. Painless blue spots can appear after crab lice feed. Other evidence of crab lice includes the occurence of rust-colored insect exretions and darker spots in underwear and flakes similar to dandruff in pubic hair.

Females lay about 30 to 90 eggs or so during their lifetime. Eggs hatch after about six to eight days. Young lice then pass through three more stages before becoming adults. The period from egg to adult requires about 23 days. Adults will not live beyond 24 hours after being removed from a human host.

The pubic louse is grey in colour, and smaller (1.25 -2 mm) than the head and body louse. Their body shape is oval and broader than long, with four distinct lobe-like protuberances on each side of their abdomen. The lice have a small head with short antennae and simple eyes. Each of the six legs of the louse terminates in a claw, but claws on the second and third pair of legs are huge compared to the first pair which are slender. Within each claw there is an associated thumb-like projection which enables the louse to grasp body hair.