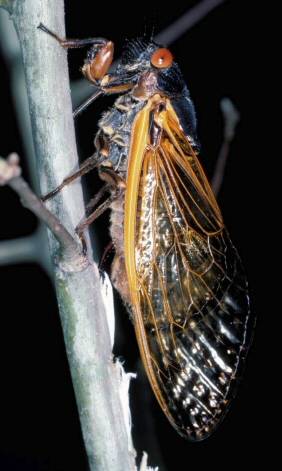 Both nymphs and adults feed on a wide variety of deciduous forest, shade, and fruit trees. Trees that show the most conspicuous symptoms of oviposition injury are oak, hickory, ash, maple, hawthorn, apple, black locust, birch, and dogwood.

Periodical cicadas usually do not cause a great deal of damage. The nymphs suck sap from small tree roots which could kill some of the roots but is probably not economically important. The adults suck sap from trees, but cause very little damage. The adult females cut slits in small twigs of trees in which to lay their eggs. This may kill the twig, but on large trees this causes no more damage than moderate pruning. Small trees, however, are sometimes seriously injured when the cicadas are numerous. Periodical cicadas do not bite or sting and are harmless to people. 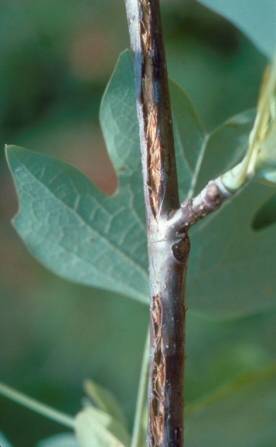 The periodical cicadas have the longest life cycle of any known insect. The adults that emerged in 1981 had spent 17 years in the soil as nymphs feeding on tree roots. Their parents were active in 1964 and their offspring emerged in 1998. Sometime during mid to late May, the nymphs will emerge at night from the soil and crawl up on a tree trunk or whatever is nearby. The nymphal skin splits down the back and a new adult emerges. The empty, brownish shells will be left clinging to the tree trunk. All the cicadas in a given area will normally emerge within one to four nights. The adults live for three to five weeks. After mating, the females lay eggs in slits in the bark of small twigs. When the eggs hatch, the tiny nymphs drop to the ground, burrow into the soil, and begin another 17 years of feeding.

The periodical (or 17-year) cicadas are about 1 1/2 inches long. They have mostly black bodies, red eyes, and orange tinted wings. There are three species in Oklahoma. They are separated by minor differences in the colors and markings. There is also at least one species of 13-year cicada in the state. It is very similar to the 17-year species.