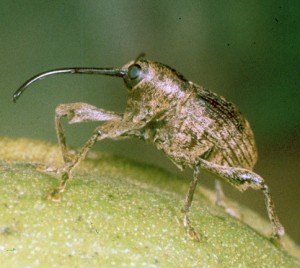 The only economic host is the pecan where feeding and breeding take place in the developing nuts. The pecan weevil will also breed in hickory nuts. 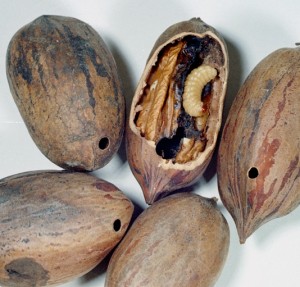 When the adults emerge from the soil they feed on nuts by puncturing the shuck and shell. If the nuts are still in the water stage, they lose fluid through the puncture and fall from the tree two or three days later. These damaged nuts can be recognized by the dark stains on the outside of the shuck. The main type of damage is caused by larvae feeding within the nut. One to four larvae develop inside each nut and destroy the entire kernel. 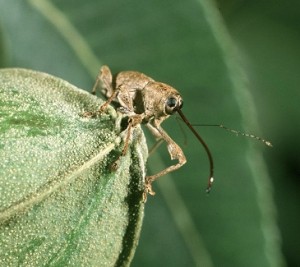 Adult weevils may emerge from the soil from late July into October, often after rain has softened the ground. Peak emergence is typically between August 10 and September 20. In years of extreme drought during August, peak emergence can be delayed until September or even later. As they emerge, the weevils begin to feed on the pecan nuts and mate. Egg laying begins when the weevils find nuts in the gel stage. The female drills a hole in the nut with her snout and then places one to four eggs within the developing kernel. Larvae hatch and feed on the kernel, maturing in about 30 days. Maturity may be reached as early as September or as late as December. Mature larvae chew a hole in the nut shell, fall to the ground, and burrow into the soil. They remain in the soil as larvae for one year. Some of the larvae pupate from early September to the middle of October the following year and change into adults about three weeks later. The remaining larvae spend another year in the soil. Those changing to adults remain in the soil until August or September of the following year before emerging. The larvae that spend two years in the soil pupate and remain in the soil as adults for a third year. One generation takes two or three years.

Adults are hard-shelled beetles with long slender snouts and thin legs. They are reddish brown to gray and about 1/2 inch long. The snout of the female is longer than the body while the males snout is slightly shorter than the body. A pair of long, elbowed antennae are attached at about the middle of the snout. The larvae are creamy white, legless grubs with soft, fleshy bodies and reddish brown heads.