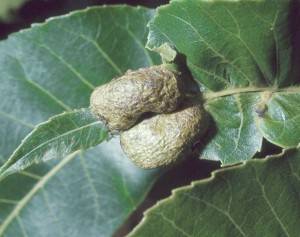 These three species of phylloxera are found only on pecan trees. Similar galls found on hickory are caused by other, closely related species. 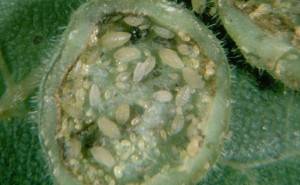 The pecan phylloxera, which attacks pecan shoots and fruit, can destroy an entire nut crop and severely weaken and disfigure limb and shoot growth. The weakened and infested shoots tend to sap the tree's vitality and reduce subsequent production. The other species, which attack leaves, cause less damage but heavy infestations can cause some defoliation. Galls of all three species can be hosts for first generation hickory shuckworms and this can lead to population buildups of this pest.

All three species of phylloxera overwinter as eggs in protected places on the branches of pecan trees. The young that hatch from these eggs are known as "stem mothers" and first appear about the time that the leaves begin to unfold. The stem mothers migrate to opening buds or leaf tissue and begin to feed on the new growth. This feeding stimulates the development of galls which enclose the feeding insects in a few days. Inside, the stem mother matures, lays her eggs, and dies. Nymphs hatch from the eggs and feed within the galls until they mature. In late May or early June the galls split open and the new adults emerge.

In the pecan phylloxera, winged, asexual adults emerge from the galls. These migrate to other parts of the same tree or to nearby trees where they lay eggs of two sizes. The small eggs hatch into male sexual forms and the larger eggs into female sexuals. After mating, the females find protected places on the trees and die with a single, fertilized egg inside them, protected for the winter. There is one generation of galls per year. 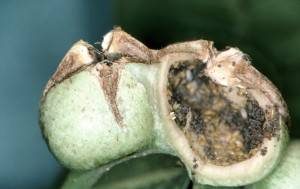 In the pecan leaf phylloxera, winged, sexual adults emerge from the galls caused by the stem mother. These sexual forms mate and the females find a protected place to lay a single egg before dying. They also hatch asexual, gall-forming nymphs in the same galls from which the sexual forms emerge. These crawl to new areas of foliage on the same tree and form a second and, in some cases, eventually a third generation of galls in one season.

The southern pecan leaf phylloxera produces wingless, sexual forms in the galls caused by the stem mother. The females crawl to protected places to lay their single egg. The egg is usually not completely laid by the female and remains attached to her dead body. There is one generation of galls per year.

Phylloxeras are tiny, cream colored to pale yellow insects that resemble aphids but lack cornicles (the tubes found on the rear end of aphids). They have sucking mouthparts and are 1/ 10 to 1/5 inch long. Their feeding stimulates the plant to produce galls on the leaves, stems, and nuts. The phylloxera reproduce inside the galls. There are three species on pecans in Oklahoma.

Pecan leaf phylloxera (P. notabilis Pergande). This species produces small galls next to the midribs or secondary veins of the leaflets. The galls are ovoid to globular, open on the ventral surface of the leaf, are evenly green on the top and often reddish beneath when first formed. The phylloxera produced are winged.

Southern pecan leaf phylloxera (P. russellae Stoetzel). This species produces small galls between the secondary veins on the leaf surface. The galls are round and flattened, open on the ventral surface, and show a reticulated pattern on their surface. The opening is marked by dense, short, white hairs. The phylloxera produced are not winged.