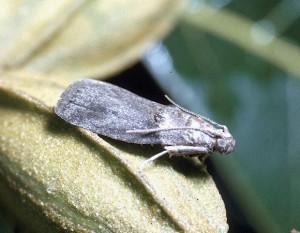 This species occurs only on pecan. Similar larvae on hickory and walnut belong to other, closely related, species. 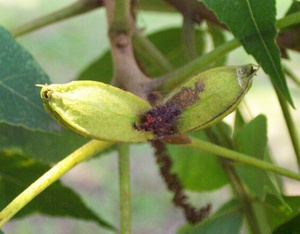 Most of the damage is caused by first generation larvae feeding in the young nuts in late May and early June. Due to the small size of the nuts, each larvae feeds in several nuts to complete its development. A larva often destroys an entire nut cluster. Second generation larvae do similar damage but usually each larva only damages one nut. Overwintered larvae cause a certain amount of damage by tunneling and killing new shoots early in the spring. 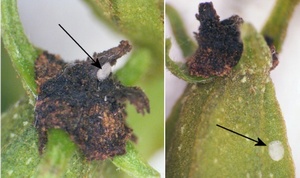 The pecan nut casebearer overwinters as a small larva in a cocoon-like hibernaculum at the base of a pecan bud. These larvae emerge at budbreak, feed on the buds, and then bore into the tender shoots where they pupate. Adults emerge in late May, mate, and lay eggs on the tips of the developing nuts. First generation larvae hatch and begin feeding in the nuts, usually entering through the stem end and completely hollowing out the nut. Each larva moves from nut to nut in a cluster, spinning a silken web over the base of the nuts. Larvae pupate in a damaged

nut and new adults emerge about 10 days later. Larvae of the second generation feed on maturing nuts from late July to late August. The larger size of the nuts enables a larva to develop in a single nut. Adults emerging in September give rise to the small larvae which construct hibernacula and overwinter. 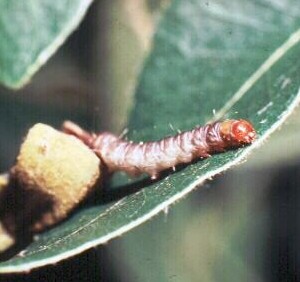 The adult is a small, brownish gray moth about 1/3 inch long. It has a ridge or tuft of dark scales extending across the middle of each front wing. The eggs are flat, very small, and white when newly laid. They develop red lines after two or three days and turn entirely red before hatching. Full grown larvae are about 1/2 inch long with olive green to dark green bodies and yellowish brown heads.