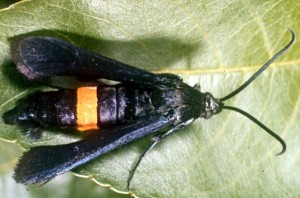 Although primarily a pest of peaches, this insect will also attack nectarine, plum, prune, cherry, apricot, and almond. The original host plants of this native insect are thought to have been wild plums and cherries. 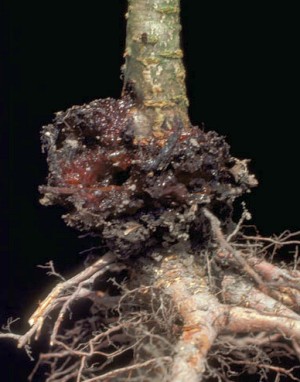 The damage is done by the larvae as they feed on the cambium and inner bark of the tree trunk, usually just below but sometimes just above the soil level. The larger roots are also sometimes subject to borer attack. A distinctive gummy ooze is found in and around damaged areas. Peach trees of all ages from nursery stock to the oldest trees are injured. Young trees are sometimes completely girdled by the insect, and though this is less likely to occur on older trees, these are often so severely injured that their vitality is lowered and they are rendered especially susceptible to attack by other insects or by diseases. 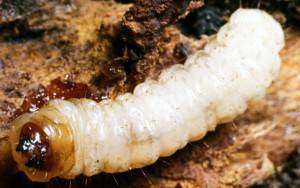 The peachtree borer overwinters as a partly grown larva in its burrow beneath the bark of the tree. In the spring, feeding is resumed and the larval period is completed. When mature, the larva constructs a cocoon under the bark at or near soil level and pupates. Adults emerge 17 to 25 days later. Moths may emerge any time from May to September, depending on the maturity of the larva when it overwintered. Mating usually occurs the day of emergence and egg laying begins immediately after mating. Each female may lay 500 to 1200 eggs which hatch in about 10 days. Most eggs are laid on the lower 6 inches of peach trunks or on the soil next to the trunk on a small group of trees surrounding the tree from which the female emerged. There is one generation per year.

The adults are "wasplike" clear-winged moths. Unlike most moths, they are active in the daytime. The wings of the male are transparent with steel blue trimmings along the margin and veins, and its abdomen is marked with narrow yellow bands on a steel blue ground color. The front wings and body of the female are dark steel blue except for a bright orange band around the fourth abdominal segment. The wingspread is about 1 1/4 inches and the body length is about 1 inch. The eggs are a rich chestnut brown, distinctly flattened, depressed or concave on one side, and one end is slightly broader than the other. The larva is a white or cream colored caterpillar with a brown head and yellow plates on the thorax and last abdominal segment. They are about 1 1/2 inches long when mature. The cocoon is made of silk and covered with particles of bark and excrement.