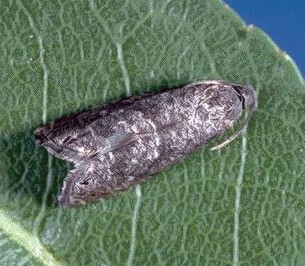 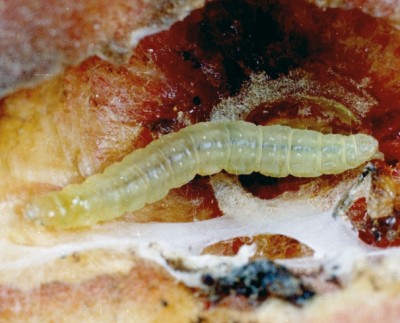 The larvae cause damage by attacking the twigs and fruits of the host plants. In peach a newly hatched larva enters the tender, growing twig at its tip near the base of a young leaf, consuming the central part, and gradually working its way down the twig for 2 to 6 inches. This causes twig dieback and the production of lateral shoots. Twig damage is seldom important in hosts other than peach.

Larvae may enter the fruit near the stem or through the side. The entrance is usually marked by frass or a gummy exudation. Larvae can also enter fruit through the stem and leave no visible sign of entrance. Inside the fruit, larvae may cause long irregular channels through the soft tissue or confine their feeding to a small area, often around the pit. Frequently, brown rot infection in peaches starts at the entrance or exit holes of larvae.

The oriental fruit moth overwinters as full grown larvae in cocoons in protected areas on or near the host tree. They pupate early in the spring and moths begin emerging about the time that peach trees are in full bloom (usually early April). There are probably 5 or 6 overlapping generations per year in Oklahoma. A large part of the first two generations live as borers within the succulent terminal twigs of peach. In some seasons substantial numbers attack small green peaches. In subsequent generations most of the insects attack the fruit. The first two or three generations are complete, but in later generations some of the larvae stop developing and form overwintering cocoons. During the spring and midsummer, a large part of the population is found in peach. In late summer and fall, apple becomes a favored host, and unsprayed quince is almost always heavily attacked.